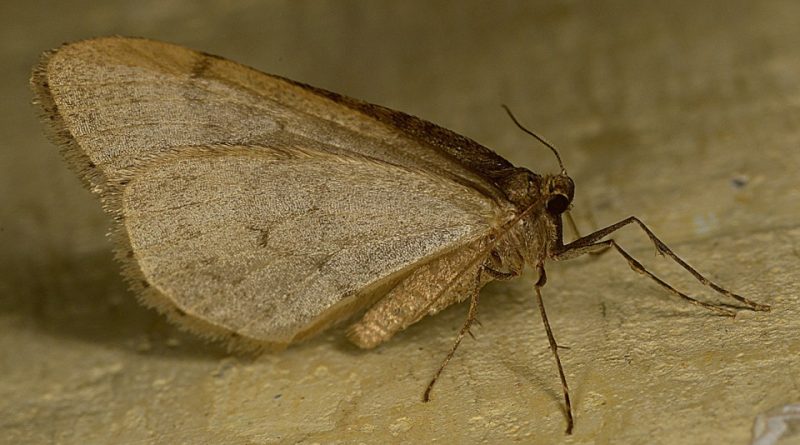 The Winter Moth (Operophtera brumata L.) is a moth belonging to the family of geometrids.

Geographical Distribution and Habitat –
The winter moth is a moth native to northern and central Europe, up to Italy; it is also present from the Caucasus and Asia Minor. The populations of the winter moth living in Europe are the result of the recolonization that took place after the last ice age.
It is also a somewhat invasive species in Nova Scotia, in the coastal zone of the eastern United States and also in the areas of the northwestern Pacific (mainly the island of Vancouver). It is one of the very few lepidopterans in temperate regions where adults are active in late autumn and early winter. The host plants on which he lives are mainly apricot, plum, cherry, peach, pomaceous, forest and ornamental broadleaf trees.

Morphology –
The winter moth is a butterfly with marked sexual dimorphism with the female that is practically attera, with wings are very small and atrophic, dark in color and with the body covered by a thick gray-white hair that gives this moth a lighter appearance . The male is winged, with a wingspan of 22-30 mm, with reddish-yellow gray fore wings, crossed by darker wavy transverse lines and light ocher back wings; both pairs have fringed margins. The larvae of this moth are greenish, glabrous and about 25-30 mm long and move with the typical arched movement of the geometrids.

Attitude and biological cycle –
The Operophtera brumata is a very polyphagous and harmful insect at the larval stage as these are active leaf removers. Their activity is evident on the leaves with the characteristic erosions on the leaf edges, both on the margins and inside; the leaves look prickly. Furthermore these larvae also affect the floral structures that are devoured, the small fruits, on which they cause damage similar to that of the embroiderers and the gems that can be irreparably damaged inside.
This moth winters at the egg stage that is laid, by the females in the recesses of the rind or near the buds. With the arrival of the following spring, around the month of March, the larvae are born from these eggs which, by feeding, produce the aforementioned damage. The larvae reach maturity towards the month of June and then descend into the ground, where they often let themselves fall, to break up and pupate to flicker in the autumn and start a new cycle with the deposition of the wintering eggs.
Therefore, the moth does only one generation a year.

Ecological Role –
The winter moth is a moth that performs its cycle on many essences, as this moth has a high polyphagia. The host plants on which he lives are, as mentioned, above all apricot, plum, cherry, peach, pomaceous, broadleaf forestry and ornamental.
The activity of the larvae of the Operophtera brumata, which is expressed in the defoliation of the species affected, has the maximum danger of harmfulness between the months of April and May.
The containment of the populations of this moth can follow either biological control criteria or, in the case of high attacks, those of the guided and integrated struggle using sampling, to establish population density, and some physical measures to reduce infestations.
As far as biological control is concerned, above all in European regions this insect can be contained by two parasitic species: a wasp (Agrypon flaveolatum) and a fly (Cyzenis albicans). The wasps lay their eggs in the moth larvae; on the other hand, the flies lay their eggs on the leaves, which the larvae ingest when they feed on the leaves.
Other restoration techniques allowed in biological ltta can be performed using interventions with Bacillus thuringiensis var. kurstaki to be carried out in the second half of April.
Other interventions against this moth may be those of a mechanical nature.
The fight consists in the application of adhesive strips to be placed around the trunks, at man’s height, to capture the females that climb the trunks to lay their eggs; the fight is useful to reduce the number of ovipositions.
To carry out the principles of the guided struggle, samples must be taken using the following criteria:
– pre and post-flowering sampling: the presence of infested organs (flowers, leaves and shoots) must be assessed;
– the indicative threshold is set at 5% of infested organs.
The operation is carried out when the threshold is exceeded. The fight can also include preventive treatments, depending on the attacks suffered in previous years:
– at the end of winter, against the wintering eggs;
– the enlargement of the buds against the small newborn larvae. In this case, activated white oils are used.