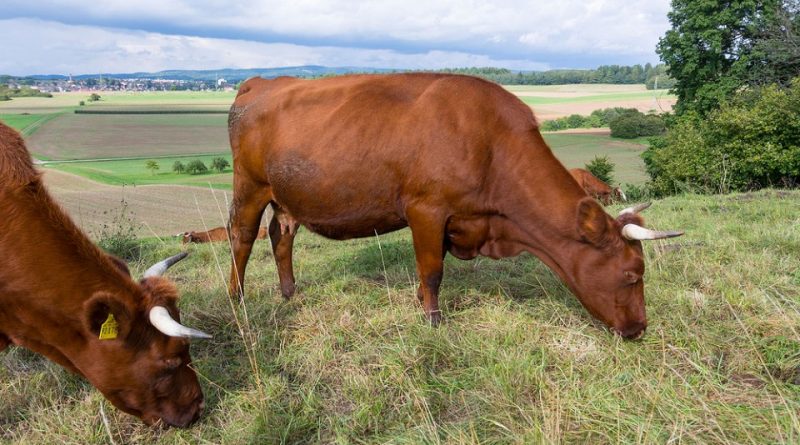 The Harzer Rotvieh is a cattle breed (Bos taurus Linnaeus, 1758) originally from the province of Harz, in northern Germany, a dual aptitude for meat production and milk.

Geographical and area distribution –
The Harzer Cattle Rotvieh is a breed bred in the mountainous region of the Harz in northern Germany.
The Harz is a mountain range in northern Germany which lies on the border between the Länder of Lower Saxony and Saxony-Anhalt, and is therefore the northernmost of the German mountain ranges. The name “Harz” comes from a word of the upper middle German which means “forest”.

Origins and History –
The Harzer Rotvieh is a bovine breed with a uniform red coat and is probably one of the oldest and most primitive breeds bred.
Its origin is to be found in the red cattle breeds of southern and central Germany and probably dates back to the strain of Germanic-Celtic red cattle.
Breeding and isolation conditions in the difficult territories of the Harz mountain ranges have subsequently given rise to the characteristics of this breed.
Originally the High Harz farms consisted mainly of small farmers, mostly miners. Breeding conditions were often poor and only a few could afford more animals and the space needed for their breeding.
Subsequently, in the 50s of the last century, with the introduction of higher yielding cattle in the production of milk and meat, this breed was crossed with the bulls of the Danish red dairy cattle breed, in order to increase the production of milk.
This has led to several crossings so that since 1980 the Harzer Rotvieh this breed has gone to join the Rotes Höhenvieh cattle breed along with other populations of local breeds.
Today this breed, due to its low competitiveness with more productive breeds, is at risk of extinction. In 1996, 360 cows were listed in the herd book.

Morphology –
The Harzer Rotvieh is a bovine breed, of medium size, characterized by an intense mahogany red coat with a uniform color.
The cattle have short horns, yellowish in color with a dark tip and a tail and tuft of the same bright color.
The muzzle is deep red.
The limbs are strong and the hooves are dark and robust.

Production aptitude –
This breed that was originally triple-oriented, ie milk, meat and labor, is now bred for the production of milk and meat.
The yields of this breed are obviously not comparable with high yield breeds but we must also consider the more difficult breeding conditions of this breed both for the leaner pastures and for the climatic conditions of the mountains where they are raised.