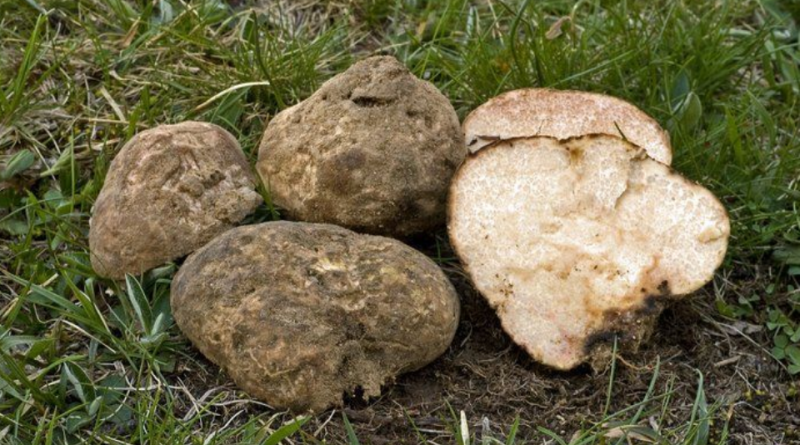 The sand or yellow truffle (Terfezia arenaria (Moris) Trappe, 1971) is an ascomycete mushroom of the Pezizaceae family.

Etymology –
The term Terfezia comes from the French terfez (derived from the tuareg tarfest, tĕrfest, in turn from the Arabic tirfās, tirfāsh), that is truffle.
The specific epithet of sandstone is in reference to the arena, to the sand: proper to sandy places.

Geographical Distribution and Habitat –
This truffle grows in alluvial, sandy and acid soils or in the pine and cedar forests of the Mediterranean areas in mycorrhizal association with cysts and with plants of the genus Helianthemum: H. guttatum, H. guttatum var. plantagineum.
The fruiting period is between March and May

Recognition –
The Terfezia arenaria is recognized for having a fruit-bearing body of subglobose or hemispherical or piriform shape with a diameter that can range from 3 to 10 cm; this is covered at the base by a mycelial lattice that ends with a large rhizomorph.
The peridium, which has a thickness of 2-3 mm, pinkish in section, formed by 20-50 µm wide hyphae, has a surface that is initially white, smooth and with black specks, to then become pink and more dark with age to eventually become black-brownish and cracked.
The gleba is crossed by striations that separate the fertile part, becoming more evident over time. This is meaty, white at first and then pink, with no significant odor but pleasant taste.
At the microscope, spheres are seen as globose, ocher in color, initially smooth then warty, rounded, with dimensions of 18-20 X 24-28 µm.
The axes are elliptical, with 6-8 spores, with dimensions of 80-120 x 70-100 µm.

Cultivation –
The sand or yellow truffle needs alluvial soils, with sandy texture and acid pH and the presence of species with which to create a mycorrhizal association. Suitable species are pines, cedars, cysts and plants of the genus Helianthemum: H. guttatum, H. guttatum var. plantagineum, etc. of the Mediterranean areas.

Uses and Traditions –
The yellow truffle is an edible truffle, appreciated and traditionally used especially in Sardinia, where it is available and typical of some coastal areas. It is found and used frequently also in Arabia and in the Middle East.
This Terfezia could be mistaken for Terfezia claveryi, which is in any case edible, and which grows in mycorrhizal relationship with Helianthemum aegyptiacum, on sands or pine forests near the sea. It is distinguished by its completely reticulated spores and its exterior color, which is white-ocher or reddish-brown.
Another similar is Terfezia leptoderma (or Tuvara leporina), which is always a hypogeum fungus of the Mediterranean area and is highly sought after in Sardinia, especially in the Oristano area. It grows at bushes of Helianthemum and Cisto, has spiny spores that make it distinguishable from other species, and is initially ocher and then reddish, brownish.
This truffle, which is widely used in different areas of Puglia and Sardinia is the subject of intense research and is highly appreciated in the kitchen. Even in the countries of North Africa, terfezie are considered to be of excellent quality, to the point of being sold at prices that are certainly not economic.
The problem obviously arises when it is sold for other more prized truffles and, therefore, trimmed to unsuspecting consumers. This is a real scam, obviously punished by the law.
As if that were not enough, in addition to the economic damage, there could also be a further problem linked to the therapies that this time concerns health. Since these underground fungi have neither the same fragrance nor the taste of the “real” truffle, they are often added with bismetiltiometano, a chemical compound derived from petroleum, which is strongly doubtful about its healthiness.
In the best case, the terfezie are kept for some time in the same warehouses where the truffles are stored, thus leaving the aroma of the “real” mushrooms to be transmitted to those “fake”.