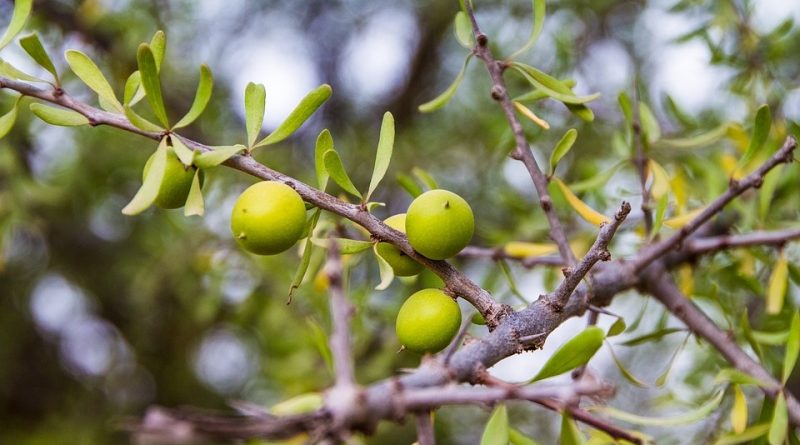 Argan (Argania spinosa L.) is an arboreal species belonging to the Sapotaceae family.

Systematics –
From the systematic point of view it belongs to the Eukaryota Domain, Kingdom Plantae, Sub-Trinchebionta, Superdivision Spermatophyta, Division Magnoliophyta, Class Magnoliopsida, Order Ebenales, Family Sapotaceae and therefore to the genus Argania and to the species A. spinosa.
The terms Argania sideroxylon Roem are synonymous. & Schult. and Sideroxylon spinosum L.

Etymology –
The term Argania comes from the Latinized form of argan oil, the Berber vernacular name (tashelhit) of these plants. The specific spiny epithet comes from thorn, thorn: thorny, covered with thorns.

Geographical Distribution and Habitat –
The Argan is a plant that is considered a “wreck” from the Tertiary as it has been growing in Morocco for 80 million years.
It is probable that in that era there were vast areas, which covered the northern part of Africa and southern Europe, covered by this plant. The area, which at that time was joined to the Canaries, contracted later in the Quaternary era probably due to climatic changes linked to glaciations. This hypothesis would confirm the current existence of some colonies present in the Rabat area and also further north, near the Mediterranean coast in the north-east of Morocco.
Its habitat ranges from sea level up to about 1 500 m of altitude. 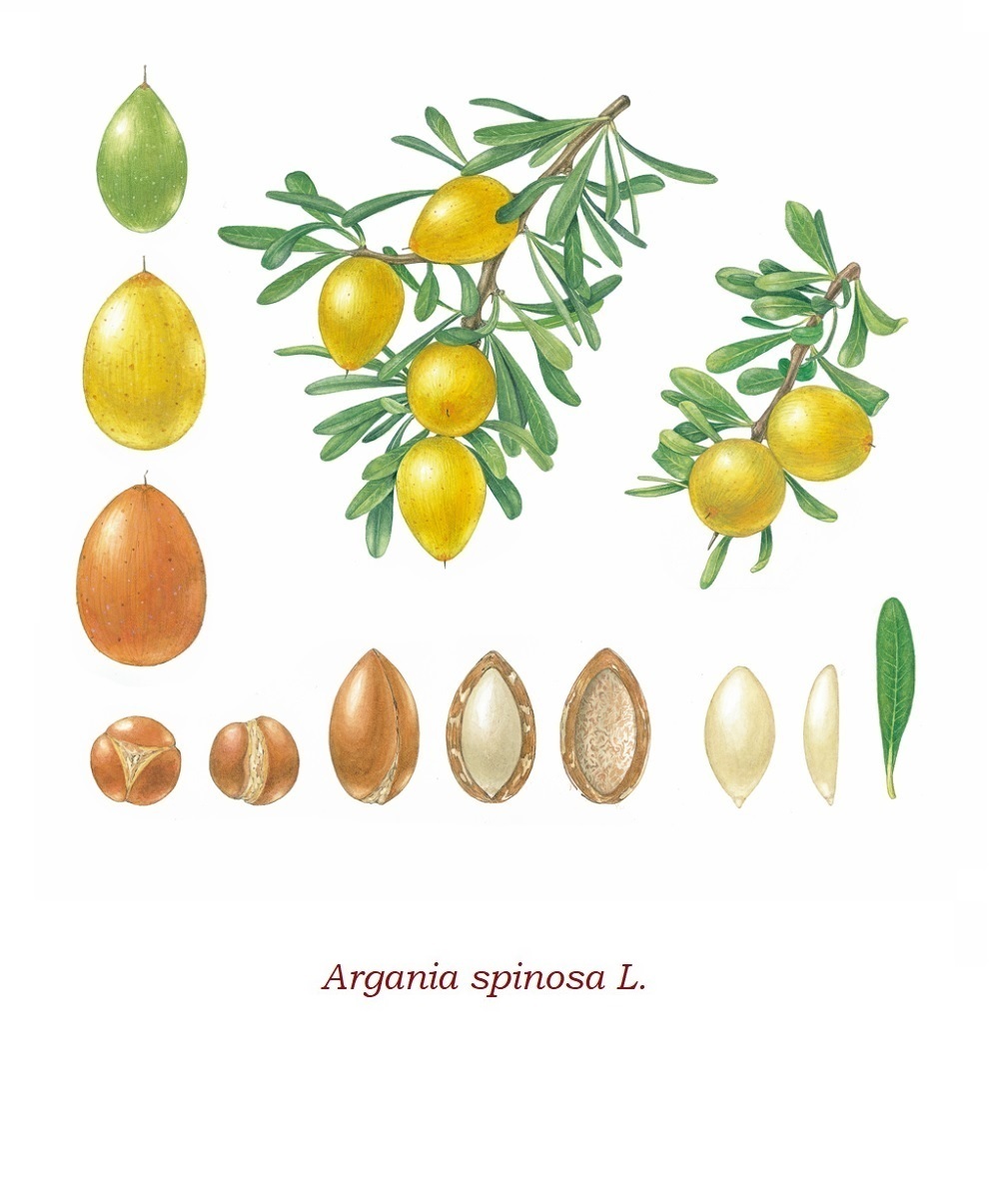 Description –
The Argan is an arboreal species, which can reach 8-10 meters, with a wide and rounded crown, a gnarled, tortuous and quite short trunk, often formed by several parts intertwined with each other and with thorny branches. This plant, in areas with a more difficult climate, can take on the dimensions of a small shrub.
It is a long-lived species that can live even 150-200 years and is perfectly adapted to the aridity of the south-west of Morocco.
The flowers are of a color ranging from white to greenish-yellow and appear in the period between May and June; they are gamopetals with a very short corollino tube and are combined in glomerulus inflorescences.
The fruit is an oval, fusiform-shaped drupe, about 30 mm long, which becomes yellow-brown when ripe and, inside, contains an extremely hard “walnut” (formed by the woody endocarp and seeds).
Inside there are up to three seeds sometimes commercially called “argan almonds”.

Cultivation –
For the propagation of this plant consider that it is necessary to know the difficulties of multiplication because of the leathery integument that covers the seeds.
These seeds, in order to be softened, must be immersed in warm water for a period of 2 to 4 days before sowing. Another solution can be the covering with a damp cloth at a temperature of about 20-25 ° C. Plant the pre-germinated seeds in small trays with a light layer of soil, peat and sand and periodically water without excess, limiting them to keep the soil moist. Germination times vary from a few weeks to a month.
For cultivation, bear in mind that this plant needs exposure in full sun, it tolerates drought and temperatures between 3 ° C and 30 ° C very well but it survives at high temperatures and up to 1400 meters. It prefers poor and sandy soils. Argania is a very rustic species that survives without difficulty in extreme conditions and temperatures, in saline and arid soils where its roots can reach the point of seeking water even at a depth of 30 meters. The plant does not tolerate damp and asphyxiated soils where it presents stunted growth and short life.
A medium-sized tree produces about 8 kg of seeds per year.

Uses and Traditions –
Argan is an endemic tree of Morocco (south-western areas and the Sous plain) and of the Tindouf region in Algeria.
The large Argan trees have the value of symbols of life and represent a residual cultural element, linked to the very ancient Berber civilization.
In Tassila, near Tamanar, there is an Argan tree, which is considered the oldest, called “Targante Nchick”, or wise tree, which is celebrated every year with a popular gathering, with traditional lunches, dances and songs, recalling the past and with hope for the future.
For the value of the habitats where these trees grow, since 1988, an area of ​​about 830,000 hectares, natural location of the “argan forest”, between Agadir and Essaouira, has been declared by the UNESCO “Biosphere Reserve”.
The survival of these plants is linked to the fact that the traditional harvest is carried out by wild plants, that is, not cultivated, normally of “property of the king”, ie on state lands. While the government has provided new facilities on state-owned land, the rigorous harvesting of the fruits compromises the natural reproduction of the species. Another factor that is very damaging to the survival of the species is linked to grazing by goats in state-owned lands, which do not limit themselves to tearing leaves and fruits from the ground, but climb up to the highest branches, completely stripping the plants. The leaves, dark green and leathery, in fact serve as food for camels and goats.
The extension of the cultivation of the plant, carried out in analogy to the cultivation of the olive, would obviate many of these problems, obtaining among other things improvement in quality.
The Argan plant also supplies a very hard wood, used mainly as heating timber.
As for the extracted oil, this contains over 80% unsaturated fatty acids, composed of about 37% linoleic acid, oleic acid, palmitic acid, stearic acid and is rich in vitamin E.
Argan oil is therefore rich in linoleic acid, vitamins E and A, fights aging.
It also has healing properties and protects the skin from external aggressions by neutralizing free radicals.
Particularly suitable for nourishing the devitalized hair, strengthening nails, dissolving muscle contractions and nourishing very dry skin
The composition of this oil makes it highly emollient, and highly stimulating for cell renewal; recent studies have shown that it contains antioxidant substances that fight aging.
There are two types of ARGAN oil depending on whether the stones are toasted or not before use.
The cosmetic oil, lighter, is used by applying it to the skin and hair and is effective against hair loss, eczema, dehydration of the skin, plays an emollient action on the skin, stimulates cell renewal and helps neutralize the radicals free, thus preventing premature skin aging.
The edible oil, darker and with a stronger taste due to the roasting of the seeds, is used as the common oil to flavor food. It is very nutritious and constitutes, along with chopped almonds and honey, a very nutritious paste used for breakfast.
For incredibly low yields (2 to 3.2 kilos, every 100 kilos of dried fruits), this oil is very expensive. Except for a minor part, produced and consumed locally, specialized production is almost completely exported.
The Berber population of the Atlas has always used argan oil for its food and cosmetic virtues. Like tea, argan oil is traditionally offered to guests along with honey as a sign of respect and hospitality.

Preparation Mode –
Argan oil for food use is perfect for seasoning fish, salads, grilled vegetables and, of course, the traditional cous cous.
In addition, argan oil is used to prepare Moroccan desserts or as a condiment for dishes from the north-west of the territories where this plant grows.

One thought on “Argania spinosa”