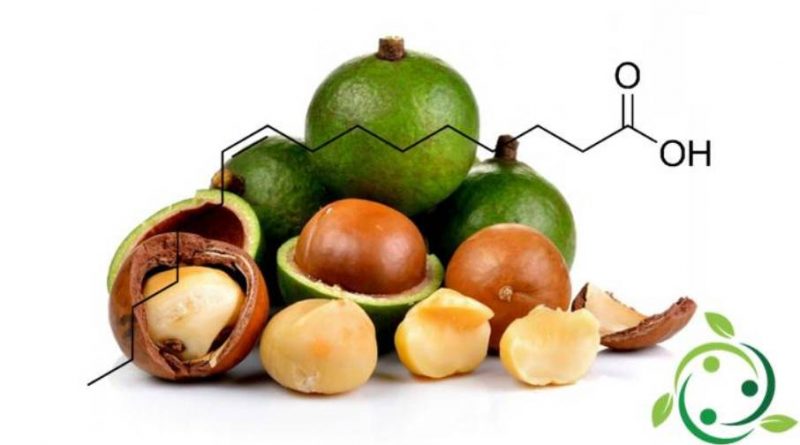 Palmitoleic acid whose term in the official IUPAC nomenclature is: cis-9-hexadecenoic acid has a brute or molecular formula: C16H30O2. It is a monounsaturated fatty acid with 16 carbon atoms.
Palmitoleic acid is naturally present in animal and vegetable fats; it is present in pumpkin seed oil, sesame seed oil and lentisk oil. Palmitoleic acid is however present in many species but the content is significant only in the oil of sea buckthorn (Hippophae rhamnoides) and in that of macadamia (Macadamia integrifolia); these oils contain, respectively, about 40 and 17% of palmitoleic acid.
This oil can be synthesized by the body from other fatty acids, in particular from the palmitic acid (C16: 0) by intervention of the delta nine desaturase enzyme (the palmitoleico is both an omega 7 and a delta 9, since if you starts counting from the carboxyl end, the first carbon atom involved in the double bond is the number 9).
In any case, even if palmitoleic acid belongs to the group of monounsaturated fatty acids, from the health point of view it is comparable to palmitic acid, a saturated fatty acid with a pro-atherogenic effect:
A diet with higher amounts of palmitoleic acid increases the levels of bad cholesterol, LDL, in hypercholesterolemic patients, even when the dietary intake of cholesterol is low; this increase is comparable to that obtained with palmitic acid, but clearly superior to that induced by supplementation with oleic acid.

Moreover, compared to palmitic acid, palmitoleic caused a greater reduction in good cholesterol HDL.
For this reason, from a health point of view, it is not advisable to replace the traditional sources of unsaturated fatty acids (olive oil, seed oils and fish oils) with oils from sea buckthorn or macadamia.
However, the sensitivity of the liver and muscle insulin receptor would depend on this fatty acid. Recent studies have shown a very high level of palmitoleic acid, at the level of the cell membrane, in the children of long-lived people.
Recently, “palmitoleic acid” has been ascribed “anti-fattening” properties, due to its ability to act as a signal molecule that prevents the accumulation of dietary fat in adipose reserves (in genetically modified rats).
Palmitoleic acid also finds application in the field of cosmetics.
Emollient and moisturizing properties are attributed to cosmetic products containing sources of palmitoleic acid. However, this fatty acid, along with other members of the omega-7 series, has been identified as a possible cause of the characteristic smell of aged skin.