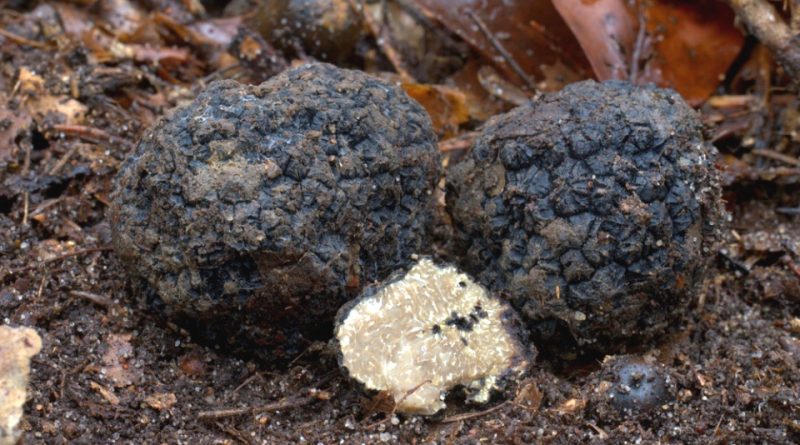 The Black Autumn Truffle (Tuber uncinatum Chatin, 1892) is an ascomycete mushroom belonging to the Tuberaceae family.

Etymology –
The term Tuber comes directly from tuber tuber, a term from the truffle to Pliny and other authors. The specific epithet uncinatum comes from the uncinus hook: hooked, with parts shaped like a hook.

Geographical Distribution and Habitat –
The Black Autumn Truffle is a hypogeal fungus, mycorrhizal, which rarely crops up, perhaps due to the soil moved by mammals, such as wild boars. It is a common truffle, with a wide ecological spread, where it grows under various types of broad-leaved trees and in predominantly clayey or humus-rich soils.
It is widespread from the Mediterranean coast to Scandinavia, from the Atlantic coast to the former U.R.S.S. In Italy it is common in the high hills and in the mountains in the central regions but it can also be found in other areas.
It reaches maturity in the autumn period between October and December. 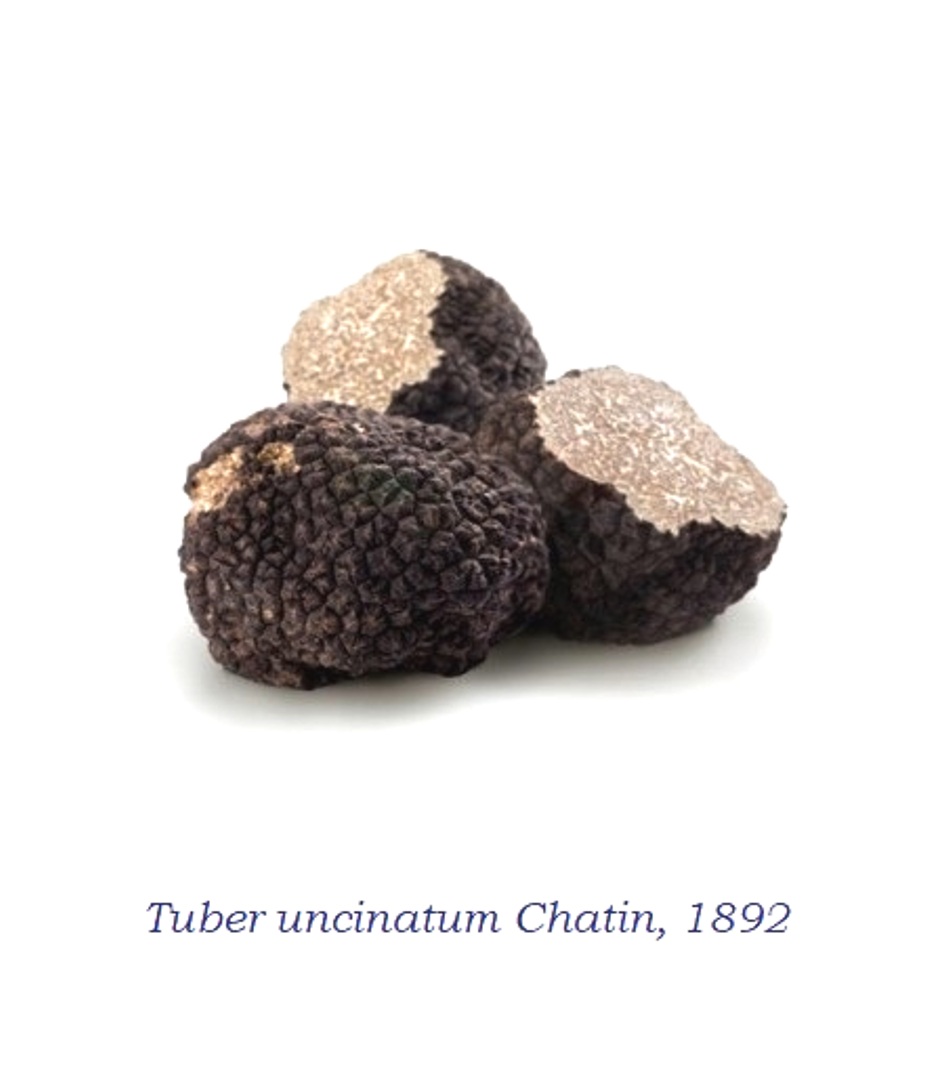 Recognition –
This truffle is recognized by peridium, or verrucous rind, black in color, with underdeveloped warts.
The gleba is dark chocolate brown in color especially in mature specimens, with numerous light branched veins; it has a stronger and more pleasant smell and taste than Tuber aestivum and more pronounced.
At the microscope we can see saccular asks with a short peduncle and a maximum size up to 100 µm, a sporadic number (1) 2-5 (6); the spores are brownish-yellow, from ellipsoidal to sub-globose, reticulated, alveolar with irregularly polygonal links 8-10 µm wide, 3-5 µm high in number (2) 3-4 (5) along the largest dimension. The statement of the sporal dimension must take into account, as often happens in the Tuber, that the spores of the axes which contain from 1 to 2 are on average much larger, so it may be useful to define it in two intervals: aschi with 1-2 spores 30 -40 × 20-27 µm, axes with 3-6 spores 20-26 × 13-19 µm.

Cultivation –
The Black Autumn Truffle, compared to the summer truffle, prefers shaded environments, escapes the areas too exposed to the dissecting rays of the sun, and therefore lives well in the pine forests, in the oak woods and at high altitudes in the black hornbeam. This tuber requires humidity in the soil and prefers medium to high altitudes, up to 1100-1200 s.l.m .. It grows better in calcareous soils, rich in humus and organic substance.
The fruiting bodies appear towards the middle of June but if the July rains are lacking the truffles dry up and do not ripen. The best truffles are those that ripen in October, November and December. Production can also continue until February and sometimes some rare truffles can also be harvested in April-May.
It is collected a few centimeters deep, often under the litter.

Uses and Traditions –
The Tuber uncinatum is very similar to the Tuber aestivum (Vitt.) Of which some authors consider it a variety. For some it is a systematically distinct species, for others of a different variety, others still claim that it is the environment that allows the later maturation.
This truffle is called with the common names of: hooked truffle, winter scorzone, black truffle from Fragno, suareccio (Abruzzo).
The history of the hooked truffle is very long. It is a food of the Italian culinary tradition, known in many regions. Suffice it to say that in Abruzzo this truffle is even referred to by a different name which, as mentioned, is called suareccio truffle.
Abruzzo is one of the regions in which there is the greatest collection of hooked truffles and this is due to the particular conformation of the soil and the absence of arid areas, which are not suitable for a correct maturation of the product.
The history of the winter scorzone shows that this product has been known for years, in fact the traditional recipes in which it is used are not lacking. Abruzzo is not the only region that is able to enhance the product, but many other areas of our peninsula appreciate and make the most of this special ingredient.
With regard to his certain recognition, it is recalled that any confusion with other blackish-brown truffles is avoidable taking into account the large, hard and raised warts that adorn the peridium of this species. The odors and the color of the gleba are different, for example, in Tuber melanosporum Vittadini 1831 (prized truffle from Norcia) it has a decidedly darker maturity and a more intense aroma. Tuber mesentericum Vittadini 1831, which is certainly the most similar, is distinguished by having slightly smaller warts, very pronounced basal cavity (reniform aspect), different odor, unpleasant as iodoform.
In any case, it is always the microscopic analysis that can dispel any doubt.
Tuber uncinatum is a truffle with good organoleptic characteristics and its demand is constantly increasing both on the domestic market and abroad.
It is a truffle characterized by a pleasant and quite intense aroma, the meat has a tasty flavor reminiscent of hazelnuts.
This food has a high amount of antioxidants, which help to counteract free radicals, responsible for numerous harmful processes and the cause of oxidative stress. The introduction of truffle in the diet can therefore contribute to improving the well-being of the body.
The hooked truffle, and in general the black truffle, are also associated with aphrodisiac properties. This is obviously a bland effect and does not occur in all people, but which must be emphasized when talking about the properties of this food. At the moment there are no scientific studies showing the real presence of this property, but at the same time there are no studies that deny a possible aphrodisiac effect.
We must also remember the high mineral content and also the ability of the hook truffle to improve digestion, making the entire digestive process faster and more effective.
For its collection, as for other truffles, remember that the search for truffles is to be considered the exclusive prerogative of prospectors with dogs trained for this purpose, other “empirical” systems can easily be ineffective, and harmful to the ecosystem of growth.

Preparation Mode –
The Black Autumn Truffle is one of the ingredients of many recipes. It is a truffle that can be eaten both fresh and dried.
Before consuming the raw truffle or before using it for your own preparations it is important to clean it properly. We recommend using a brush with soft bristles and rinsing the black truffle under running water. At the end of the cleaning of the product, it is advisable to dry the truffle with a cloth, so that it is ready to be used at its best.
The first courses made with this product are famous, including risotto with black truffle and black truffle tagliatelle. In general, pasta dishes made with this product should not be overly processed. This is to avoid losing the taste of the truffle and above all to ensure that it is the same truffle that gives the excellent flavor to the dish.
This type of truffle can also be used to prepare excellent sauces, to be served with different courses, especially meat dishes, or to serve as an appetizer with croutons and seasonal food.
It can therefore be easily combined with appetizers, first courses and main courses. Very often it is simply sliced, combined with dishes and enhanced by extra virgin olive oil, or its flavor is highlighted by the combination with butter.
The hooked truffle, being part of the black truffles, can be cooked, unlike the white truffle which absolutely must not be cooked. Rather than cooking it would be better to talk about heating, because in reality this truffle must be heated to the maximum for a couple of minutes, in order to avoid altering its taste and aroma.
It is also possible to make a hooked black truffle sauce, very simple to prepare. Simply grind the fresh truffle in a saucepan, add some butter or extra virgin olive oil and let it warm up for a short time. The fire must be extinguished before the mixture boils and the sauce in preparation must be allowed to cool.
The sauce can be used immediately or can also be stored in the freezer for up to six months. If you choose to store it in the freezer for future use, we recommend putting the prepared sauce in the container and adding more extra virgin olive oil before closing the container and placing it in the freezer.