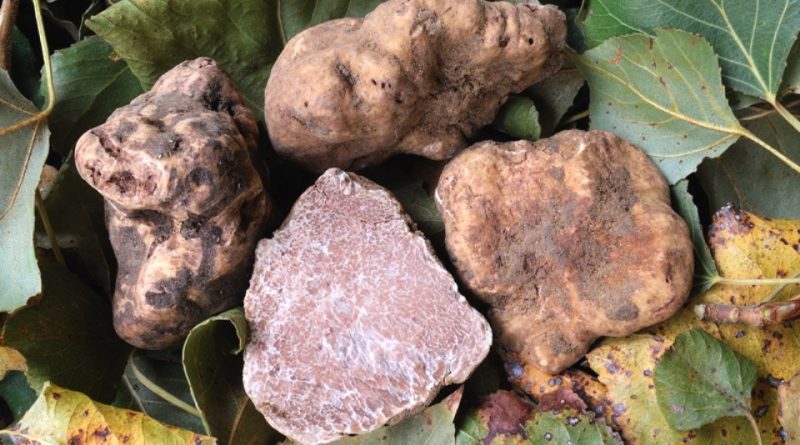 The white truffle (Tuber magnatum (Pico, 1788)) is an ascomycete mushroom belonging to the Tuberaceae family.

Etymology –
The term Tuber comes from túber tubero, the name used for the truffle by Pliny and other authors. The specific epithet magnatum is the plural genitive of magnátes, the great ones: of the great ones, of the lords in reference to the high cost.

Geographical Distribution and Habitat –
The Tuber magnatum is a symbiotic, hypogean fungus, which grows underground at depths varying from a few cm. up to over one meter. It grows in association with broad-leaved trees (beech, oak, oak, oak, poplar, hornbeam, willow or linden, etc.) up to 1,000 meters above sea level, preferring average altitudes from 100 to 700 meters above sea level, where it does not tolerate prolonged summer droughts, so much it is that it seems that summer precipitation conditions the production of truffles. It is found above all in marly-calcareous clayey soils, often along watercourses, bearing fruit in the period from summer to autumn and into winter. It is a truffle very present in Italy, especially more towards the north and outside Italy, it can also be found in Istria (currently divided between Croatia and Slovenia) and more precisely in the Motovun forest. 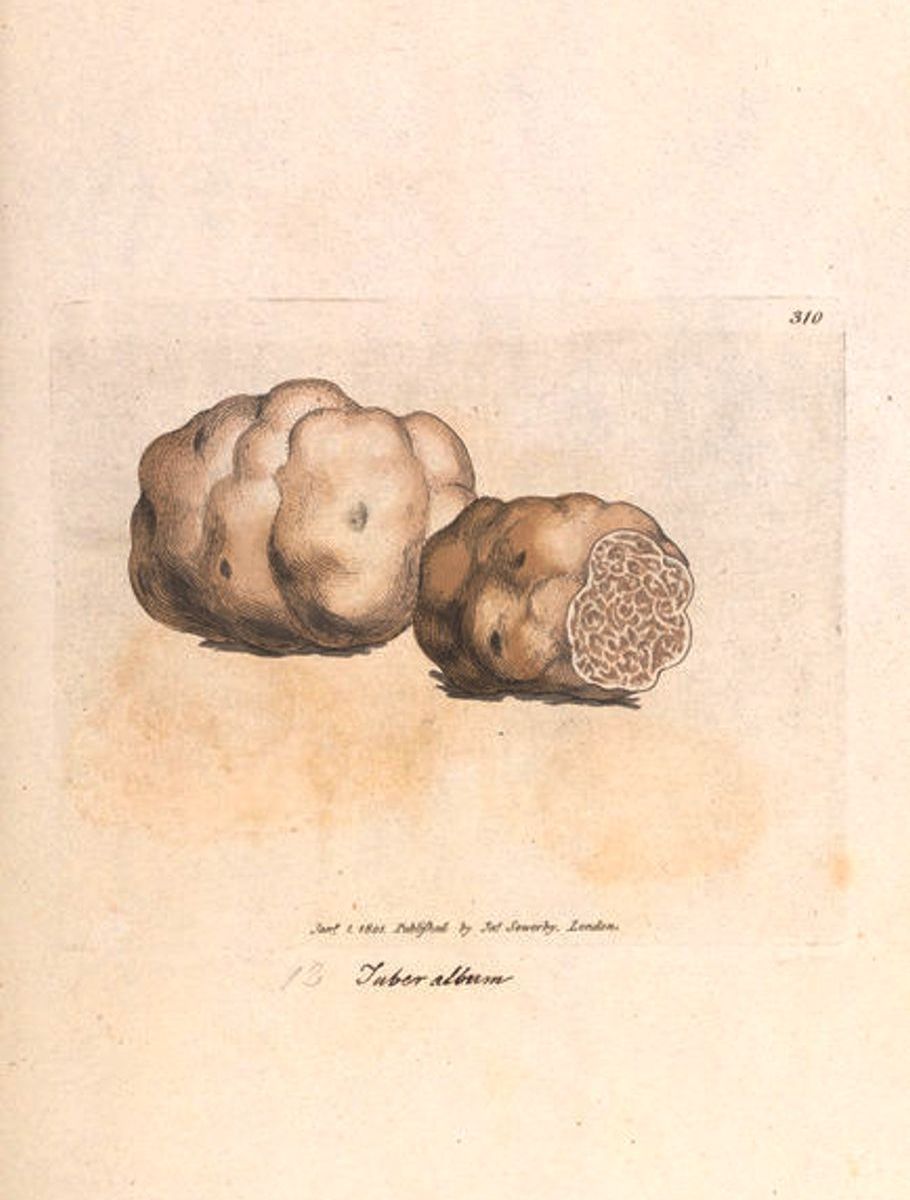 Recognition –
The white truffle is characterized by a fruiting body of 2–9 cm, of globular, irregular, velvety, ocher color.
The peridium has a smooth surface, ocher yellow or olive yellow in color and in some cases also greenish-gray.
The gleba is white, with a marbled appearance that with age takes on a reddish-colored stain on a gray background.
It has an intense odor with tones reminiscent of tetrahydrothiophene (a product used to smell methane gas for domestic distribution) or fermented cheese.
At the microscope, spores of egg-shaped, cross-linked, of 32-45 x 30-40 µm, yellow in mass are noted.
The axes are from mono to tetrasporic, of 60-120 x 40-100 µm, globose, sometimes sub-pedunculated.

Cultivation –
For the cultivation of this truffle it must be taken into account that the ground of the natural truffle grounds of Tuber magnatum consists of substrates composed of marl, marly limestone, clayey marl, sandstone formed in the Tertiary Age and to a lesser extent in the Quaternary Era. The white truffle prefers shady and cool locations; therefore it is found mainly in the valley bottom, in the woods, along rivers, streams, streams, ditches, rarely in isolated plants and in sunny positions.
In suitable soils the weaving normally varies from frank to frank-sandy or loam-thin, with a low clay content, however always soft, drained, with a good porosity of the soil. These soils have a normally alkaline or sub-alkaline pH, with a good total limestone content (average value 15-25%), with a low supply of phosphorus and a good content of calcium and potassium.
Consider that the optimal vegetation conditions are between 100 and 700 meters above sea level, in areas characterized by low summer drought.
Among the symbiont plants we remember: roverella, cerro, farnia, oak, black hornbeam, hazel, poplar, willow, linden.
Remember therefore that for the choice of the cultivation area there are few areas that correspond to these requirements. In fact, the Tuber magnatum is, by far, the most difficult truffle to cultivate and has the longest expectation. Even if the plant is made after careful and thorough preliminary research, truffle breeding does not always provide satisfactory production results. In these cases it is certainly necessary to review and develop the cultivation technique. The time of collection will then be three September and December.

Uses and Traditions –
The Tuber magnatum is also called with the usual names of white truffle, Alba truffle, Piedmont truffle, Acqualagna truffle, or Trifola (in Piedmontese language and Bolognese dialect) and Tartufola (in Veneto dialect).
The white truffle is very common in the area of ​​Alba (CN), where the oldest white truffle fair takes place annually. Not far from the Piedmontese town, precisely in the Castle of Grinzane Cavour, every year there is the World Auction of the White Truffle of Alba.
In any case, its spread is particularly greater throughout the Lower Piedmont, namely Langhe, Roero, Monferrato and Monregalese, it is rich in white truffles. It is also present in other regions of Italy, which boast the collection of the same product, such as in particular the Tuscan-Emilian Apennines and the Umbria-Marche Apennines, the Crete Senesi and the plain woods of Muzzana del Turgnano, in the Bassa Friulian.
Also in Lombardy, it can be found in the Municipalities of Carbonara di Po and Borgofranco sul Po.
Another wide spread is recorded in the area of ​​Upper Umbria and the province of Pesaro-Urbino, which have as their reference the market of Acqualagna (PU), the most important in Italy after that of Alba. Other important fairs take place during the month of October in Sant’Angelo in Vado and in November in Amandola in the Marche and in Città di Castello and Gubbio, in Umbria in November.
Its history is also linked to Tuscany, where the white truffle of the San Miniato hills is renowned, having celebrated its National Fair in November for about 40 years.
Molise is also considered one of the first regions for the growth and harvesting of prized white truffles. The areas of Molise with the greatest collection are those in the municipalities of Frosolone, Spinete and San Pietro Avellana, where a truffle festival is held every year.
Going further south you arrive in Campania where the white truffle harvested in the municipalities of Apollosa, Arpaise, Ceppaloni and San Leucio del Sannio in the province of Benevento is particularly prized, and also in Calabria, in the Gioiosa Jonica area, where there is an excellent quality of white truffle.
Among the similar species with which it can be confused we remember the Choiromyces meandriformis Vittad., 1831, which is almost identical to the Tuber magnatum, but differs in the cream color mixed with ocher-hazel; it is also poisonous, even if not of very serious entity and causes a laxative syndrome to be reckoned with.
As for Tuber magnatum, it is a truffle of excellent edibility, to be used as an aromatic addition.
This truffle also has a high commercial value due to the strong market demand, limited production and low shelf life of the product.
Specialized dogs are used to search for this truffle.

Preparation Mode –
For the preparation of this truffle, like others, we must consider that they must be consumed fresh; they should therefore be stored for the shortest possible time and wrapped in absorbent paper, preferably closed in an airtight container stored in the refrigerator.
The best way to enhance them in the kitchen is to use it on tajarin (a pasta rich in yolks, thin and elegant, typical of Piedmont, especially in the Langhe area) or on other similar pastas, on the egg or on the Piedmontese fassone beat and as an aroma in many seasonings and side dishes.