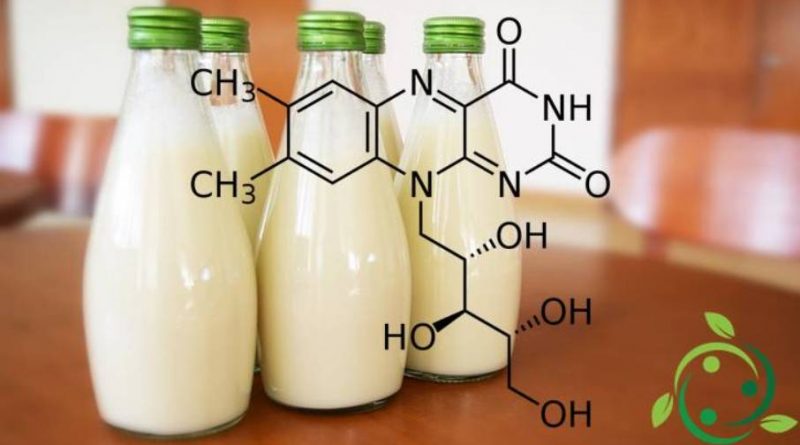 Riboflavin whose term in the IUPAC nomenclature is: 7,8-dimethyl-10- ((2R, 3R, 4S) – 2,3,4,5-tetrahydroxypentyl) benzo [g] pteridine-2,4 (3H, 10H ) -ion, has brute or molecular formula: C17H20N4O6.
Riboflavin is a heterocyclic compound by the union of a flavin molecule with a ribitol chain. Riboflavin is a yellow-colored compound that is slightly soluble in water, thermostable (only 10-20% is inactivated with cooking) and fluorescent when subjected to ultraviolet light.
Riboflavin, also known as vitamin B2, is part of the functional group of FAD and FMN cofactors and consequently is necessary for numerous reactions catalysed by flavoproteins, including activation reactions of other vitamins.
Furthermore, riboflavin, together with its 5-phosphate, are food additives recognized by the European Union with the letters E101 and E101a.
Riboflavin is a molecule very present in the natural state. It is found in vegetables, in yeast and especially in milk (and therefore in cheeses), in the liver, in the heart, in the kidney and in the egg white. In vegetables the content of riboflavin is present above all in the parts in rapid growth, while its concentration decreases when the plant stops growing.
The riboflavin content of milk is also influenced according to the type of pastures the animal feeds on. In mammalian tissues the vitamin is present in the coenzyme form.
Historically, riboflavin was first isolated in 1927 by Paul Gyorgy. Subsequently it was also seen that the milk has high concentrations of this substance which, for this reason, was initially called lactoflavin and was initially called vitamin G.
Later with the exact identification of its formula the name of the vitamin was changed to that of riboflavin.
The laboratory synthesis of this Vitamin occurred, for the first time, in 1935, by Richard Kuhn.

Vitamin B2 plays a fundamental role in the synthesis of all energy processes. Its specificity is therefore to release the right energy to the body for regular daily activities.
The daily requirement of vitamin B2 is calculated based on the calories introduced, according to a ratio that wants 0.6 mg of vitamin B2 every 1,000 Kcal.
Riboflavin is transported in the blood bound to some plasma proteins, especially albumin and other globulins such as IgA, IgG and IgM. From the blood it reaches the liver and other tissues where it is subsequently transformed into flavin-mononucleotide (FMN) and flavin-adenine dinucleotide (FAD), the two coenzyme forms.
The deficiency of vitamin B2, or riboflavin, causes children to stop growing and in general to slow down the assimilation processes of foods, especially lipid ones.
The symptoms of vitamin B2 deficiency are a general lack of appetite, anemia, muscle weakness, tachycardia and even eye problems such as cataracts, conjunctivitis and lens opacity.
On the other hand, there are no problems caused by an excess intake of vitamin B2, or riboflavin, because the excess doses are eliminated from the body by urine, quickly compared to the intake.
Since riboflavin is sensitive to sunlight, it is advisable that the milk and its derivatives are always marketed in envelopes capable of protecting the contents from light.
Even prolonged cooking, with an excessive use of water, involves a dispersion of vitamin B2, above all that contained in foods of vegetable origin.