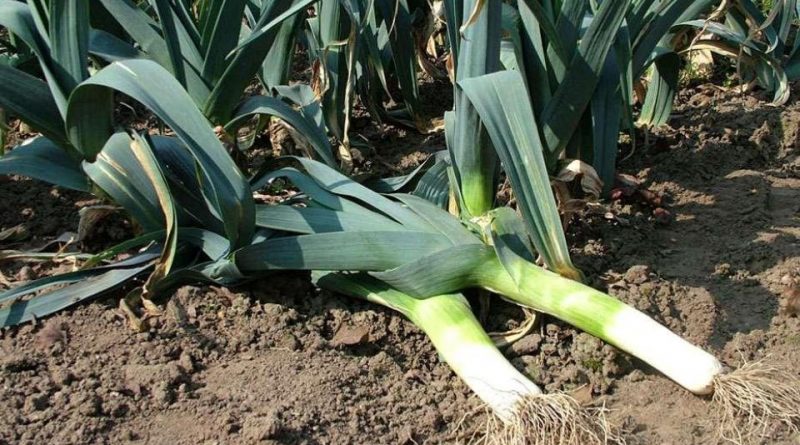 The leek (Allium porrum L.) is a biennial herbaceous species belonging to the Liliaceae family.

Etymology –
The term Allium comes from the ancient Latin name allium, alium (mentioned by Plautus, Pliny and others) of uncertain origin. According to Pianigiani it derives from the Greek ἄγλῑς áglis, head of garlic. The specific epithet porrum comes from porrum, leek and this from the Greek πράσον práson garlic.

Geographical Distribution and Habitat –
The leek is a plant native to the Mediterranean region, probably coming from the Near East. Species appreciated by Mediterranean peoples since the time of the Egyptians and Romans; its cultivation is widespread in Europe, America and Asia. It is present on the market especially in the autumn-winter period. It is cultivated in all Italian regions, especially in the Center-North. 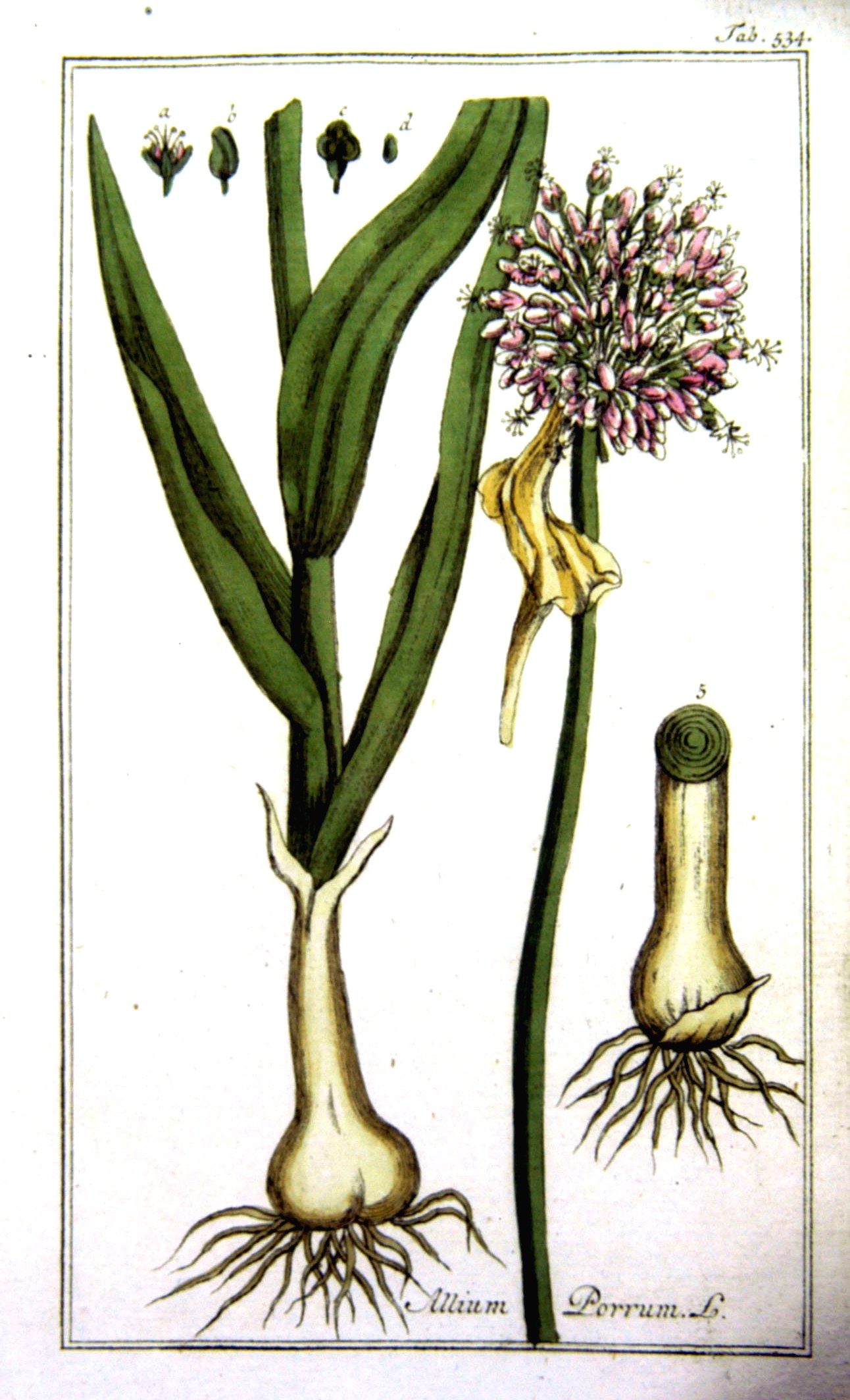 Description –
The leek is a biennial plant but cultivated with an annual cycle that has a little developed or absent bulb, elongated leaves, with an upright or hanging habit, from green-gray to bluish-green and with petioles bent as a shower and wrapping at the base, forming a false stem more or less elongated by 15 – 40 cm.
The root system is of the fasciculated type, with many roots that can be pushed up to about 50 cm deep. The stem is shortened to form a flattened disc, from which the leaves and roots depart.
The flower stem, which is emitted in the second year, in the period of April – May, is full and ends with a spherical inflorescence of 6-8 cm in diameter; this is protected by an univalve cadata spata; there are 300-400 pedunculated flowers, with white, pink or lilac tepals. The seeds are angular black and wrinkled.

Cultivation –
The leek is a plant that is well suited to both temperate-warm and temperate-cold climates, with the use of different varieties and crop cycles.
For its cultivation medium-textured soils must be chosen, with good water retention capacity, but without drainage problems and well endowed with organic substance; the pH must be between 6 and 7; the tolerance to high salinity is poor.
For the fertilization it is preferable to use mature manure in the amount of 400-500 q / Ha which must be buried with a 30-40 cm process. Irrigation is almost always necessary, except for the winter period.
For the plant it starts from plants coming from nursery 20-25 cm high; less practiced is the sowing, which is carried out with precision seeders, since we obtain leeks of non-homogeneous size and weed control becomes more complex. The crop density varies from 20 to 40 plants per square meter, higher in crops destined for early harvesting. In late crops the seedlings are tamped, useful for increasing the white part of the stem and for obtaining a greater resistance to the cold.
Harvesting operations begin when the diameter of the stems has reached 2-3 cm, after about 3-4 months from transplanting or 5-7 from sowing. After eradication, the older outer leaves are removed, cut 15 cm above the white part, the roots are shortened and washed. In the refrigerator (0-1 ° C and UR 90-95%) they can be stored for up to three months. A good production varies from 400 to 500 quintals per hectare.
There are several cultivars that are classified according to the age of production:
– Summer cultivars: sowing in December-January on a warm bed;
– Autumn cultivars: with sowing in March-April;
– Winter cultivars: with sowing in May-June.

Uses and Traditions –
The Allium Porrum derives from the Allium ampeloprasum which is a plant of ancient cultivation, already used by the Egyptians and the Romans.
Its origin is uncertain, some believe it comes from the Middle East others from the Celtic territories.
This vegetable has a remarkable past both in the kitchen and in the Greek and Roman pharmacopoeia. Hippocrates recommended its consumption to increase diuresis and milk production in the nurses. Discoride claimed to make people dream of scary things and to stimulate Venus.
Pliny wove the praises of leek stating that “taken in a barley cream, or eaten raw without bread, one day and one not, it also benefits the voice, sexual pleasure and sleep”. The Latin historian completed his analysis by telling unusual anecdotes like that of Emperor Nero who, every month on established days, ate only leeks seasoned with oil to preserve a beautiful voice. In addition, the aphrodisiac properties of leeks were also sung by the poet Martial: If the envious age loosens the wedding knot, your food will be leeks … “.
In the Middle Ages, the Salerno Medical School confirmed the virtue of the leeks to make the girls fruitful, and the herbalists advised them for internal use to treat the lungs and respiratory tract, for external use to stop bleeding and against insect bites.
Later, in the sixteenth century, Giordano Bruno saw in the leek a phallic symbol, attributing to him the quality of being transformed into the male seed. The doctor Castor Durante, in the “Treasure of Health” published in Rome in 1586 offers a fairly complete picture of the virtues attributed to the vegetable until then: “The balanced consumption of leek causes urine, facilitates menstruation … stimulates Venus; cooked with apples cleans the lungs, reduces asthma … cooked under the ashes solves the headache; removes drunkenness, … improves the voice and makes women fruitful “.
In the seventeenth century Jacques du Four da la Crespèliere, doctor, poet and libertine even wrote a poem to be able to amply describe the miraculous virtues of this herbaceous plant.
The variety Allium ampeloprasum var. kurrat, commonly called kurrat, is cultivated in Egypt and the Middle East. It is widely used in Arab and North African cuisine, mainly for leaves.
The leeks contain good doses of potassium, phosphorus, vitamins and fiber. In detail the average values ​​for 100 g of raw Leek are: Energy 61 kcal (250 kJ), Proteins 1.5 g, Total Carbohydrates 14.15 g, Total fats 0.3 g, Saturated Fats 40 mg, Monounsaturated 4 mg, Polyunsaturated 166 mg, Cholesterol 0 mg, Water 83 g, Vitamin A 95 IU, Thiamine (Vit. B1) 60 µg, Riboflavin (Vit. B2) 30 µg, Niacin (Vit. B3) 400 µg, Pantothenic acid (Vit. B5) 140 µg, Vitamin B6 233 µg, Folic acid (Vit. B9) 64 µg, Vitamin C 12 mg, Vitamin E 0.92 mg; as for minerals we have: Calcium 59 mg, Iron 28 mg, Phosphorus 35 mg, Magnesium 28 mg, Manganese 481 µg, Potassium 180 mg, Copper 120 µg, Selenium 1 µg, Sodium 20 mg and Zinc 120 µg.
In traditional Chinese and macrobiotic medicine, leek is considered a heating food.
However, leek has diuretic and detoxifying properties.

Preparation Mode –
Only the white part of the leek is eaten, fresher and more fragrant, while the leaves are discarded, although more and more often lately they are also used by the great chefs to give crunchiness to soups and velvets. The leek can be eaten raw or cooked in many ways. It can flavor dishes of any kind just like onions, but it is also very good on its own, baked in the oven or stew.