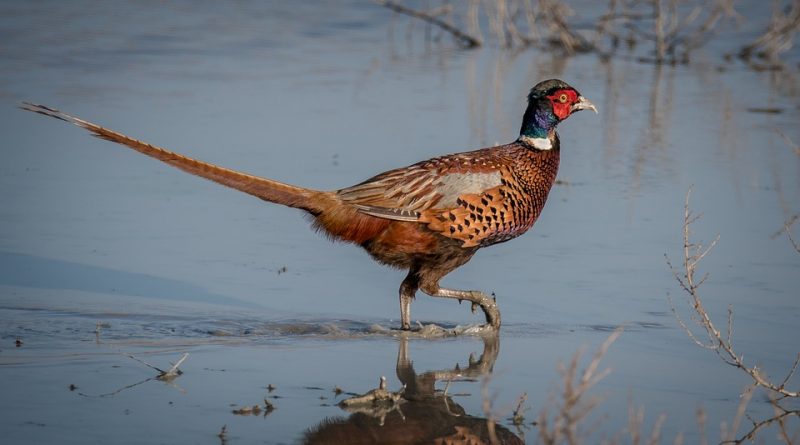 The common pheasant (Phasianus colchicus Linnaeus, 1758) is a bird belonging to the Fasianid family.

Systematics –
From the systematic point of view it belongs to the Eukaryota Domain, Animalia Kingdom, Phylum Chordata, Aves Class, Galliformes Order, Phasianidae Family, Phasianinae Subfamily and therefore to the Genus Phasianus and to the P. colchicus Species.

Geographical Distribution and Habitat –
Phasianus colchicus is a species native to the hilly areas of central-eastern Asia; the common Pheasant has however shown a marked adaptability and environmental flexibility, colonizing disparate environments in all the places where it was introduced, from the river valleys, to the cultivated fields, to the urban parks and gardens of different Italian cities.
It is in fact a cosmopolitan species introduced in Europe, North America, Chile, New Zealand, Australia and some oceanic islands. The 30 subspecies described were grouped into 5 groups: “colchicus” group (4 subspecies, western areas of the original area); group “principalis-chrysomelis” (6 subspecies, eastern areas of the original western area); group “mongolicus” (2 subspecies, Russian and Chinese Turkestan); group “tarimensis” (1 subspecies, Central Asia); group “torquatus” (17 subspecies, Far East).
In Italy the nominal subspecies Phasianus colchicus colchicus was introduced in Roman times for ornamental and food purposes. Subsequently, especially from the beginning of the twentieth century to the present day, immissions were introduced with specimens of different origins. Substantial repopulations were carried out both in the years 1920-1940 and in the second half of the 20th century with subspecies belonging to the groups “colchicus”, “mongolicus” and “torquatus”, so that the population currently naturalized is constituted by mestizos with intermediate characteristics between the different subspecies, although in some cases it is still possible to recognize the plumage proper to ancestral forms. 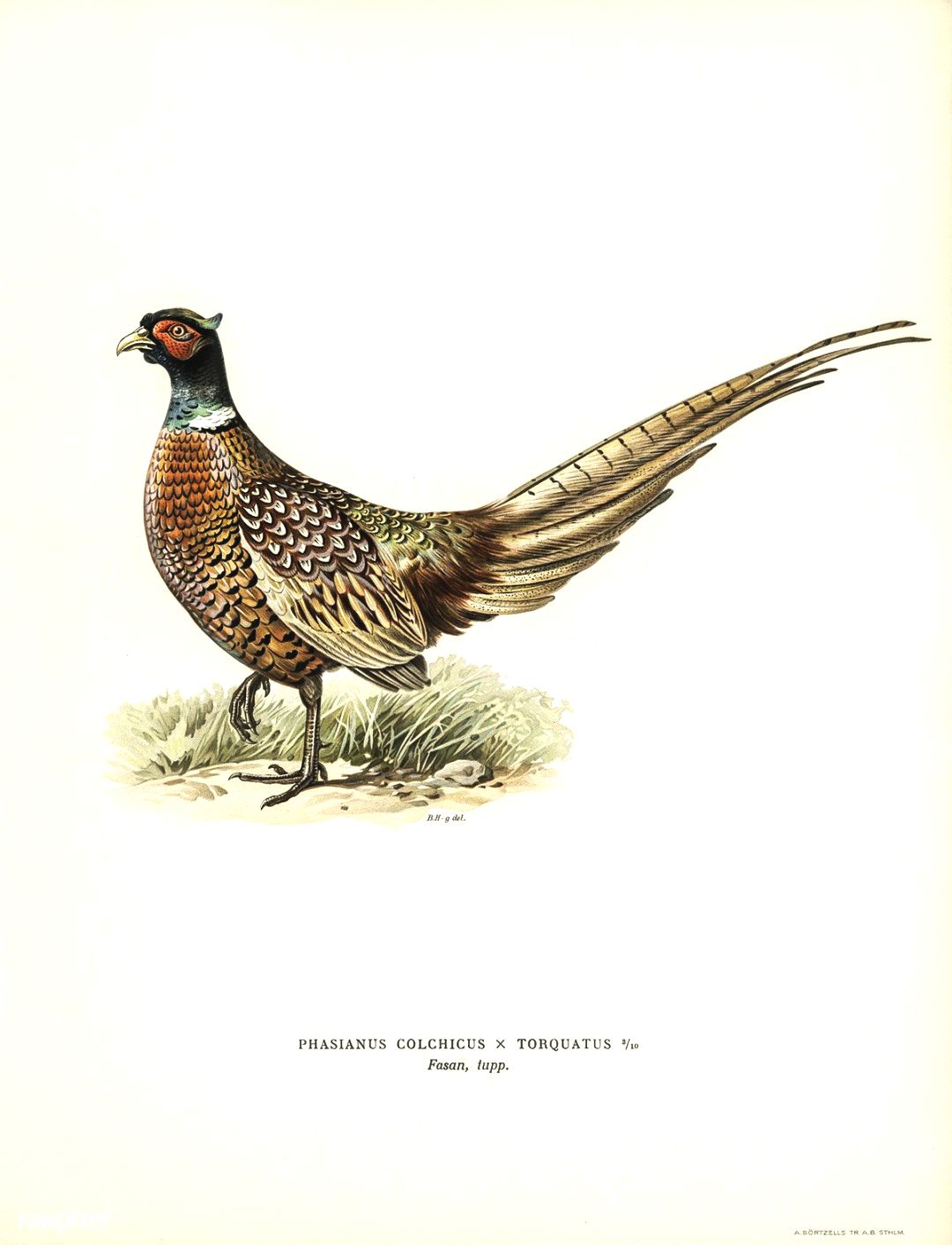 Description –
The common pheasant is a medium-large sized bird, with a male length of 70-80 cm, of the 60 cm female; weighing up to 1800-1900 g. In this species there is a certain sexual dimorphism; in fact the male has a bright dark green head with violet reflections, a mask of naked red skin around the eyes and short auricular tufts, mostly red-brown plumage, the tail is greenish-yellow with black stripes; the female has a light brown plumage with a white facial mask.
Furthermore, the plumage of the female is very cryptic and consists of a uniform gray-earth base with brown and blackish stripes and streaks; this is essential during the hatching to avoid being noticed by predators. The tail of the females is also about one third shorter than that of the males.
The legs are gray, longer than those of the chicken and give the animal its characteristic gait; on the back of the tarsus of the males there is a well developed spur.
The wingspan is about 90 cm; the wings are short and rounded, not very suitable for long movements, and produce a characteristic frullio during flight, which is heavy, rectilinear and almost always very low.
As mentioned, the colors of the plumage of the males, especially in the areas where the species was introduced for hunting purposes, show a marked individual variability, due to the simultaneous introduction of individuals of different subspecies, to the liberation from captivity of individuals carrying mutations and at the crossroads with similar species, such as the green pheasant (Phasianus versicolor).
Nevertheless, ornithologists generally tend to include most of the individuals of this species in two fundamental groups: the torquatus group, native to China and characterized by a white collar, and the colchicus group, deriving from the populations of the Caspian Depression and already known to the Romans who imported it to Europe about 2000 years ago.

Biology –
Phasianus colchicus is a stationary species in that it nests and reproduces in the same places where it spends the rest of the year. The mating period is that of spring; in this season the vocalizations of the males become more intense and insistent. The common pheasant, like almost all Fasianini, is polygamous, or a single male mates with several females.
The song of the male is composed of two high and grated notes, with the accent on the first syllable, longer, emitted by straightening the bust and the neck and followed by a short flutter of wings. It can be heard over 1 km away. Both men and women, if disturbed, fly away noisily, emitting a loud and continuous chatter. The nest consists of a simple depression of the crudely stuffed and hidden ground between the scrub; the incubation of the eggs, brown-greenish in color, varies from 8 to 15, lasts about 28 days and is conducted exclusively by the female. The young (pulli) are born already covered with a duvet with camouflage shades and are able to feed themselves and follow their mother from the first day of life; from the second week I am able to make short flights. The case of a second or even a third brood is frequent if the previous ones have had a negative outcome. All the varieties of Common Pheasant are able to hybridize between them; the cross with Phasianus versicolor produces an equally fertile offspring, so that this last species, native to Japan, is considered by some authors a simple subspecies of Phasianus colchicus. Sterile hybrids can instead be born from the crossing with other members of the same subfamily, including the domestic chicken.

Ecological Role –
The Common Pheasant is a very tied species, especially in the areas where it was introduced, to the cultivation of man, as well as to the presence of trees or shrubs for nocturnal support. The males show a marked territorialism during the whole spring and summer season and they mate with the females that gravitate in their territory. Regarding the feeding, Phasianus colchicus for most of its diet consists of seeds of spontaneous or cultivated grasses and, to a lesser extent, of other plant material. Fruits such as tomatoes or immature corn grains are consumed in the summer to make up for the lack of water with juice and latex rather than as food. Occasionally, pheasants can supplement their diet by catching insects and other invertebrates.
As with all fasianides, the flight is not active and the pheasant, after having taken a big leap, simply glides away from danger.