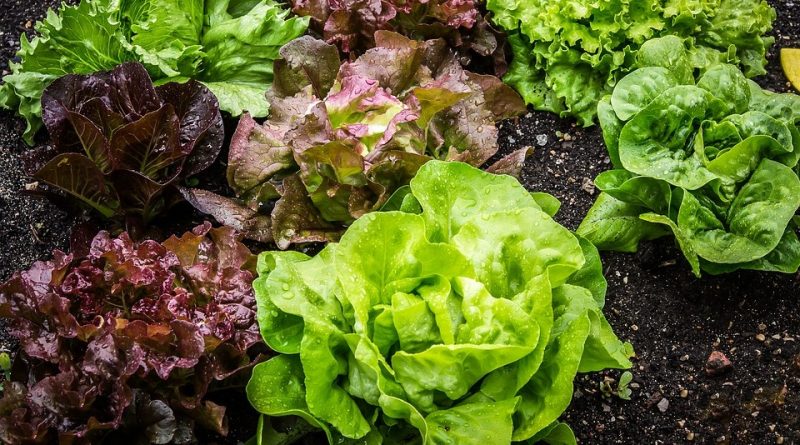 Lettuce (Lactuca sativa L.) is a herbaceous species belonging to the Asteraceae family.

Etymology –
The term Lactuca comes from lac, láctis latte: due to the abundant white latex present in plants of this genus. The specific sativa epithet is derived from satum (past participle of sero sow, plant) sown, planted: that is sown or planted, cultivated, domesticated.

Geographical Distribution and Habitat –
The origin of lettuce is uncertain; a hypothesis would lead us to consider it as coming from the Eastern countries even if this vegetable was cultivated and consumed already at the time of the Greeks and the Romans, also in Europe. In Italy its cultivation is quite extended in the various periods of the year and in different environments climate; in the winter months it is widely exported to Northern European countries. 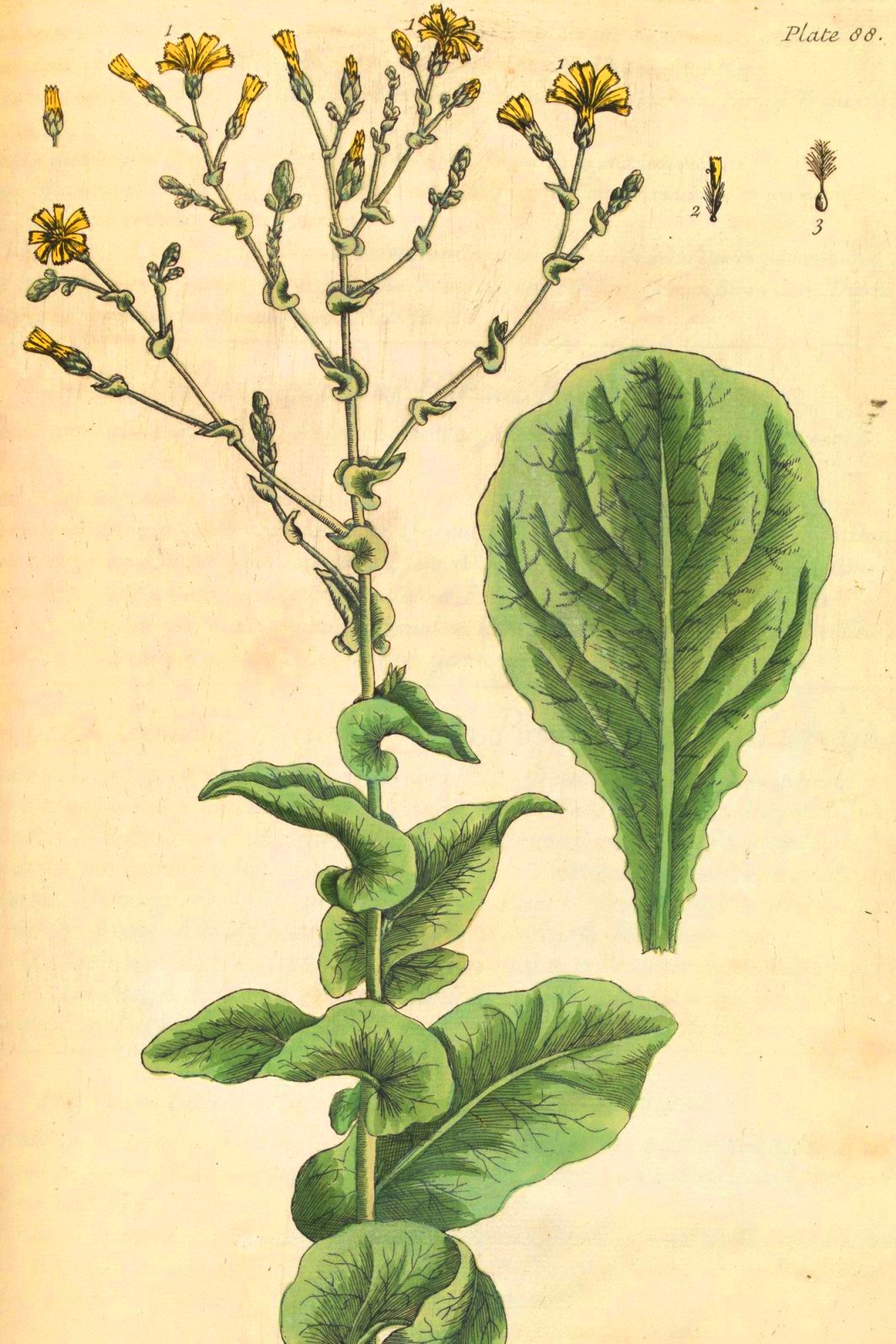 Description –
Lactuca sativa is a biennial species that the first year forms a rosette and the second the floral scape which is 100–150 cm tall and bears corimbing branching ending with a flower head. Lettuce roots are of two types: a short taproot and shallow roots.
The basal leaves are of various shapes, ovate or elongated, and green or reddish; they form a more or less compact heart or “head”.
The flowers are hermaphroditic, ligulate and yellow, the seeds are constituted by an achene of brown and black white color, separated from the pappus.
There are different types of lettuce that give the leaves a different appearance: the classic type such as the Cappuccina or Trocadero, the Brazilian type, the Iceberg with crunchy and pulpy leaves, the Batavia type, with red-bordered leaves, the Roman type presenting a elongated and oval shape and the tuft type not closed.

Cultivation –
Lettuce is a plant that prefers a temperate and mild climate, it suffers during periods of strong heat and intense frost. In cold climate regions, cultivation takes place between spring and autumn, while in warmer regions cultivation also takes place during the winter period. The ideal temperature is however around 17 ° C. Lettuce prefers exposure to light but mid-shade positions are also good. In the hottest hours and in the coldest periods it is advisable to protect the plant with a plastic sheet.
As far as the substrate is concerned, the optimal one is represented by a soil rich in organic, soft, well-drained, permeable and moist substance. A soft soil is preferred for cultivation in cold months of the year while a more compact one is suitable for summer crops. The plant can also be grown in pots. For details of the cultivation technique, see the following sheet.

Uses and Traditions –
Lettuce, in the Italian colloquial language is often, and erroneously, called a salad, being often part or main ingredient of the homonymous dish.
It is one of the oldest cultivated vegetables in the Mediterranean area, although the ancient Sumerians of southern Mesopotamia were the first to cultivate it, in irrigated flowerbeds, in 4000 BC. ca. The “Lactuca sativa”, derived from the wild “Lactuca scariola”, was cultivated by the Egyptians in gardens adjoining the houses, and considered an aphrodisiac plant sacred to the god Min (equivalent to the Greek Priopo). By attributing to it the quality of making men fiery and fruitful women, the Egyptians used it extensively, probably eating it raw seasoned with oil and salt.
The Greeks were of a completely different opinion, and the Romans of the Republican age who considered lettuce a food asleep passions.
In mythology this plant is the protagonist of two different stories. In the first Adonis he would have been killed while in a lettuce field, in the second Venus he would have laid the body of the beloved on a bed of lettuce.
The myths concealed the anaphrodisiac effect of the plant and its connotation of food of the dead, symbolism confirmed later also by Ateneo.
In imperial times it happened, however, that Augustus, of poor health and seriously ill, without the possibility of healing therapies, was saved by a doctor who treated him with lettuce. From then on, this food never failed on the emperor’s table, becoming fashionable among the Romans.
At the beginning the custom was to serve him at the end of the meal, as a sleep conciliator, then he became an appetizer, because he was recognized as having the ability to open the stomach and stimulate the appetite.
In his recipe book Apicio suggests various ways of seasoning lettuce: vinegar, honey or garum, but being a seasonal food of easy perishability, it was preserved under oxymelons (mixture of vinegar and honey).
From Augustus onwards the lettuce did not pick up that praise: Celsus compared it to opium and Discorides claimed that his drunk chased away the libidinous images.
From the Mediterranean, thanks to Roman domination, lettuce spread throughout the area of ​​Latin influence, although outside Italy it was consumed above all cooked.
With the endive it constitutes the group of salads, that is leafy vegetables for raw consumption.
It is necessary to get to 1700 for this vegetable to begin to be eaten raw also in France and in England. Brillat-Savarin remembers that a French gentleman, the Cavalier of Albignac, had a mad success, earning himself the bread by going around the patrician houses with his mahogany “necessaire”, containing the ingredients (aromatized oil and vinegars, truffles , anchovies) to season lettuce at home.
Wild lettuce was studied in 1911 by the Council of the Great Britain pharmaceutical company which, in addition to Lattucopicrina and Lactucine, found other molecules with mild sedative power, all contained in the lactucary. It is therefore a food particularly suitable to be consumed in evening meals by all those people (especially children) nervous, agitated or even with difficulty falling asleep. To this end, in addition to consuming it raw, it is possible to prepare a decoction. In our days, detailed studies on Lactuca sativa have been able to establish its real nutritional characteristics.
Being made up of around 95% water it has a great capacity to rehydrate the human body. From the base of the freshly picked lettuce a whitish latex is released (called lactucary and from which the name of the lettuce derives) which has, like opium, modest sedative properties.
Lettuce is also rich in vitamins and mineral salts. Vitamins include vitamin A, C and vitamin K; some dark-colored varieties, such as the Roman variety, contain a high concentration of beta-carotene. With the exception of the iceberg variety, lettuce is also a good source of folacin and iron; the lettuce fibers also help intestinal transit. Consuming this vegetable is a valid aid in the fight against diabetes due to its hypoglycemic effect which allows the blood glucose level to be lowered. Furthermore, due to the presence of an allergenic protein (Lac s 1), lettuce can, though rarely, cause food allergy.
There are many varieties of lettuce. Among them we can mention:
– smooth or newbie: it is a very common lettuce;
– Roman or marulla or spadona (Lactuca sativa L. var. longifolia), with very elongated leaves, with robust ribs and evident veins. The name marulla is common in Ancona, while spadona is used in Foligno;
– gentle (or gentilina): green or reddish with a slightly elongated shape and wavy leaves;
– iceberg (or Brazilian): very compact round shape, extremely crunchy leaves, light in color and very delicate flavor.
– hooded (or cappuccia): with round shape, similar to the iceberg, but with rather crunchy light green leaves. It is particularly used in Neapolitan cuisine.

Preparation Mode –
Lettuce is widely used in the kitchen because it can be eaten raw and cooked. For this reason it lends itself to countless preparations among which it is nevertheless widely used in the preparation of salads in which it is impossible to mention all the possible regional variables and adaptations.
In any case, lettuce is mainly used as a side dish, both natural and as a base for the preparation of salads rich with tomatoes, carrots, fennel, but also unique dishes with tuna, corn and numerous other ingredients. Cotta is used in many recipes for pasta and rice pasta dishes, soups, creams and velvety.
As far as its conservation is concerned, this should be done in the refrigerator, in the fruit and vegetable compartment, for about 2 days. If you have already washed and cut it, dry it well before storing it in the refrigerator.