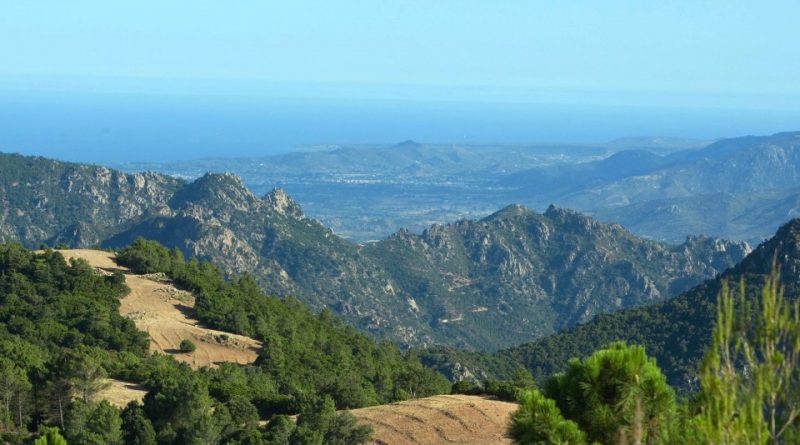 The National Park of the Gulf of Orosei and Gennargentu, identified with the WDPA Code 63647 and the EUAP Code 0944, is a protected area established by decree of the President of the Republic of 30 March 1998.
This Park is located in Sardinia, in the territories of the provinces of Nuoro and South Sardinia, and covers an area of ​​73,935 hectares, between the Gulf of Orosei and the Gennargentu massif. The interested municipalities that fall within the park are distributed between two provinces.
– For the Province of Nuoro: Aritzo, Arzana, Atzara, Baunei, Belvì, Desulo, Dorgali, Fonni, Gairo, Gavoi, Lodine, Meana Sardinian, Oliena, Ollolai, Olzai, Orgosolo, Ovodda, Sorgono, Talana, Tiana, Tonara, Urzulei and Villagrande Strisaili;
– for the province of Southern Sardinia: Seui and Seulo.
From the geological and morphological point of view the Gennargentu area is characterized by rocks of schist nature originating in the Paleozoic, during the tectonic upheavals that caused the Hercynian orogenesis.
Within this area we find the highest mountains of the island, with the maximum altitude of 1,834 meters of Punta La Marmora. Among the highest peaks of the mountain range we mention: the Bruncu Spina (1,828 meters), Punta Florisa (1,822 meters), Punta Paolina (1,792 meters), Punta Erba Irdes (1,703 meters), Bruncu Allasu (1,701 meters), Monte Iscudu (1,676 meters) and Monte Spada (1,595 meters).
The area included in the perimeter of the Gulf of Orosei and Gennargentu National Park collects more environments, mountain and coastal, representative of the lands of Barbagia and Ogliastra. The Gennargentu which is the largest mountain complex in Sardinia is dominated by Punta La Marmora from where, on the clearest days, you can see all the coasts of the island. The massif forms the central body to which the surrounding mountains of Barbagia bind, stretches over the nearby Supramonti and slides down to the sea, to form the Gulf of Orosei, the wildest stretch of Mediterranean coast.
The landscape is immense and never the same, like a large mosaic: there are mountains, pastures, rocks, canyons, valleys, forests, woods, beaches, cliffs that fall sheer to a crystalline, blue and green sea. From the Gennargentu the main waterways of eastern Sardinia are born: the Cedrino, to the north and the Flumendosa to the south; the first descends with various rivulets and forms, eroding the rock, splendid gorges; the second, which at 122 km in length is the second river in Sardinia, flows into Barbagia, recessed into canyons, until it reaches the coastal alluvial plain and then plunges into the sea.
In the National Park of the Gulf of Orosei and Gennargentu, the wild and characteristic valleys must be mentioned. Among the most beautiful we remember the Supramonte, an immense and wild calcareous-dolomitic highland chain that rises up to 1463 m. with Punta Corrasi and covers 21,000 hectares; in particular the Supramonte of Oliena, among the most ancient and still rich in vegetation, and that of Orgosolo, where ultra-centuries-old woods survive; the karst spring of Su Gologone, which with its jet of 300 liters of water per second is the most important source of Sardinia; the Gorropu canyon, the deepest in Europe, with impressive walls, over 400 meters high; the huge sinkhole called “Su Suercone”, an immense swallow-hole inside which one can glimpse a station of secular yews and, again, the secret world of the caves, with the largest cavities and chasms of the island; in the municipality of Oliena are Su Bentu – Sa Oche, about 15 kilometers of unexplored underground environment; and, finally, the Gulf of Orosei, from Cala Gonone to Santa Maria Navarrese, a unique, exceptional stretch of coast of 40 km, made up of imposing cliffs and bastions, dreamy coves, mouths of codula including the famous ones of Luna, of Sisine and Fuili: transparent water and intact depths, wonderful caves like the famous one of the marine Bue. 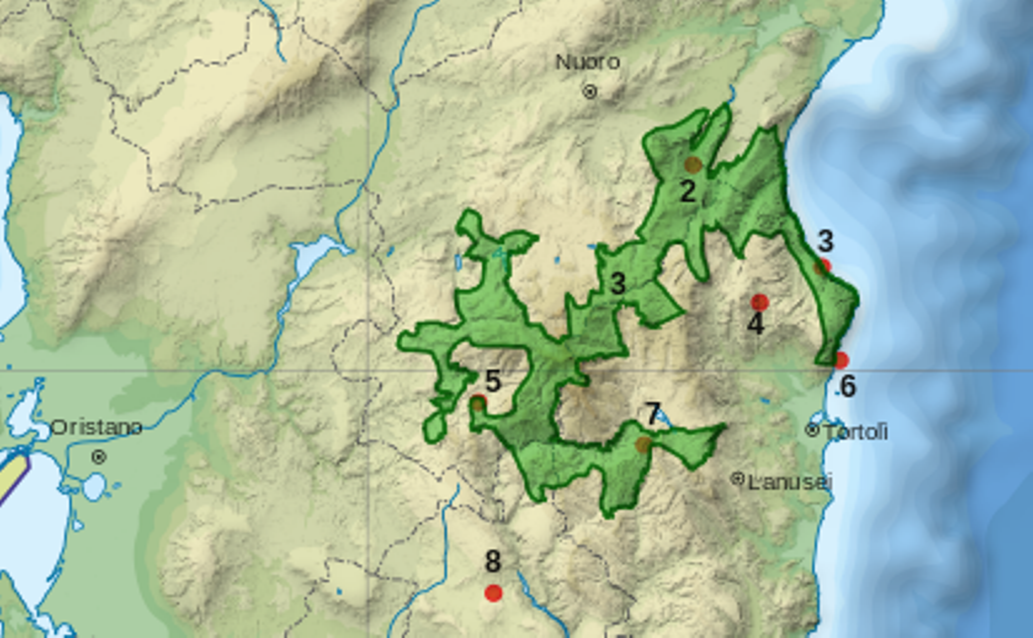 Flora –
Although it has remained wild over time, the scenario of today’s Gennargentu is not that of its origins: where in the past centuries a blanket of woods extended, only partly surviving and well preserved – thickets of holly, yew and alder, today pastures extend and steppes, particularly in the upper reaches of the district. It is an environment that, however, has achieved its own balance, enriched by the presence of interesting and often endemic plant species. Over 1,200 meters, wide grassy meadows extend while, higher up, the rocky environment takes over; very beautiful are the thyme meadows which are one of the most important elements of the thorny shrub bands; widespread the broom with more species even endemic as the broom of Pantelleria, the broom of Corsica and the rare broom of Moris. In this environment there are always helichrysum, a plant with an intense aroma that resembles that of licorice, santolina and other aromatic shrubs. Old yew specimens also live here, true patriarchs, now marked by years. Going down some altitude, at about 1000 meters, in the strip of oaks, now degraded to arboreal pasture, some specimens of downy oak resist – an abundant time throughout the island and today very reduced, due to the numerous cuts made in the past, when it was used for the construction of Sardinian railways – of Virgilian oak and of the very rare congesta oak. Even further down, in the more sheltered slopes, holm oak woods resist – on the Supramonte of Orgosolo the only intact forests of Italy survive – with maquis with strawberry trees, junipers, phillyrea and terebinth; the rest of the territory is occupied by cultivated fields and pastures marked by thorn bushes, blackthorns and other shrubs and bushes; in some areas there is also the cork-oak cork oak. Along the walls that end in the sea, where the climate is even warmer, there is a strip of olive, lentisk, juniper and carob. According to the orographic development, vegetation develops, ranging from Phoenician juniper to olive and lentisk, to holm oak, to carob and to oleander staining the banks of the codule. The peony, gentian and wild rose blooms are splendid; the mushrooms are very common.

Fauna –
The fauna is also very rich, although it has suffered significant reductions and, in some cases, serious extinctions, such as the deer and Sardinian fallow deer, the monk vulture and the bearded vulture. The one that still resists is however exceptional: starting with the mouflon, a beautiful wild sheep, one of the symbolic animals of Sardinia, with strong spiral horns; a more abundant time, today it is still common and in sensible recovery. The last of the Sardinian vultures is equally precious. In the Gennargentu sky live the golden eagles, with some nesting couples, the great ravens and the peregrine falcons; the presence of the coral chough is of great interest; the goshawks and hawks are linked to the woodland environment, while the buzzard meets almost everywhere; on the cliffs overlooking the sea, live colonies of the falcon of the Queen. In the high spots and in the woods live the great spotted woodpecker, the wood pigeon and the jay; in the thick spots and between the glades there are some brigades of the beautiful Sardinian partridge; along the streams, lives the dipper. Mammals include a good number of predators such as the Sardinian wild cat, marten, weasel and the omnipresent fox. Common and always hunted wild boar, while in the woods live the dormice, favorite prey of the marten and once also hunted by the man. Numerous amphibians and reptiles, with at least 10 endemisms: from the euprotto, to the Sardinian tree frog, from the geotritoni to the Bedriaga lizard. In the waters of the streams, lives a very beautiful and typical trout of Sardinia, the macrostigma trout. In the Gulf of Orosei the last specimens of the Italian monk seal have been sighted, especially now on the brink of extinction so as to be considered among the 10 most endangered mammals in the world.