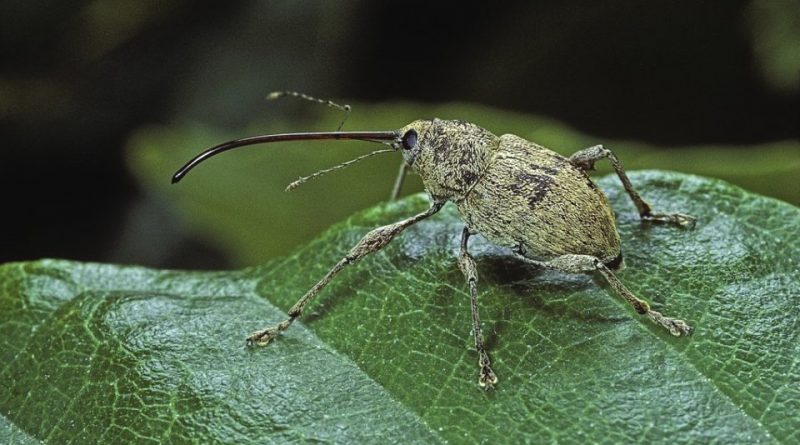 The chestnut weevil (Curculio elephas Gyllenhaal, 1836) is a small beetle belonging to the Curculionidae family.

Geographical Distribution and Habitat –
The chestnut weevil is an insect found in southern Europe and in northern Africa. It is practically spread throughout Italy in areas with chestnut groves, in oak and also hazel woods.

Morphology –
The Curculio elephas is a small beetle 7-10 mm long, excluding the rostrum, with a gray-brown color; the body is covered with a light down and has a long and thin rostrum, slightly arched and facing downwards which, in the female, reaches the length of the body. The legs and antennae are reddish brown. In the male the rostrum is shorter.
The larval forms are apode, of about 15 mm of length, of white and fleshy colors, with head and prothorax of hazel color and arched body.
The eggs are white, suboval and 0.5 mm long.

Attitude and biological cycle –
The Curculio elephas lives on Chestnut, Oak and Hazel. The insect winters, as a larva, in the ground at a depth of about 20-30 cm. In the following spring, towards the period of June, it is worsened; the pupae in 15 days complete the metamorphosis in adult balanino (the larva would however be able to prolong the diapause for some years). Subsequently, the month after, the flicker of the adults takes place which however can also take place in August.
The adults immediately begin to feed on the small fruits in the process of formation, piercing them with the beak beak. After 7-15 days from the flicker, the mating starts.
At this point the females lay their eggs, piercing the “hedgehog” with the rostrum. A female is able to lay up to 20 eggs, usually only one per fruit, but sometimes in groups of two or three. In chestnuts, however, oviposition may occur from several females.
The larvae that are born develop inside a cell, called cryptocecide, feeding on the chestnut and thus causing the fruit to fall over time.
Arrived in the month of September-October, after completing their development in 30-45 days, the larvae leave the fruit and penetrate the ground where they will be wintered. Thus there is only one annual generation.

Ecological Role –
The larvae of the chestnut weevil damage both the chestnuts and the acorns causing their fall. The extent of the damage, in the chestnut grove, varies according to the variety and arrangement of the spines of the hedgehog: varieties with short and sparse spines or with parts without thorns are obviously more susceptible to infestation.
The damage is caused by both adults and larvae. The damage caused by adults is due to the nourishment holes in the fruits, which cause their desiccation.
The damage caused by the larvae is due to the tunnels dug into the chestnuts, which cause the premature fall. The infested chestnuts can be recognized both for their opaque skin and for their greater lightness.
The fight against Curculio elephas is substantially preventive and is carried out with physical interventions and treatments for the preservation of chestnuts.
This consists essentially in the collection and destruction of prematurely fallen chestnuts, to prevent the strong infestations of the following year. Chemical treatments are not recommended due to the onset of ecological imbalances of the biocenotic ecosystem of beneficial insects. Chemical interventions that are carried out in the summer with Fosforganici are rarely justified.
Another useful trick is to carry out a disinfestation in water at 45 ° C for about 50 minutes before storing the chestnuts; subsequently, before preserving them, the fruits are dried to avoid the onset of fungal infections.