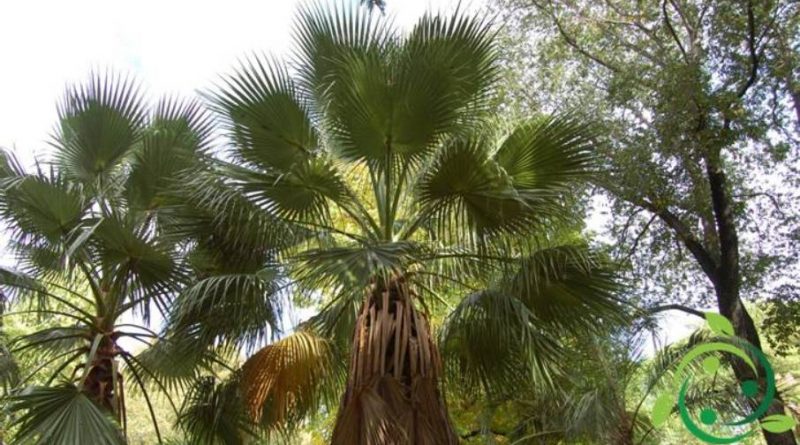 How to grow Washingtonia

The Californian Palm or American Palm (Washingtonia H. Wendl., 1879) is an arboreal species of the Arecaceae family. The name Washingtonia was chosen in honor of George Washington and is native to California and Arizona, where it reaches 30 m in height.
In this card we will see how to grow the Washingtonia following the main agronomic tricks.
The Californian Palm is a plant suitable for different climates, especially in temperate areas and is a plant, from the aesthetic point of view, ideal for parks and large gardens with exotic features.
The Washingtonia is an evergreen plant that shows a slender trunk in adult specimens, lower and jagged in the younger ones. At the apex of the stem are the fan-shaped leaves with pointed lobes, very similar to the leaves of the Chinese palm.
There are some varieties of this palm: let’s remember the Washingtonia Filifera, with green-gray fan-shaped leaves with filamentous-pointed lobes that in summer produces bunches of very small flowers and with cream coloring and in winter produces black berries; the Washingtonia Robusta is also quite widespread, which is very similar to the previous one, but with palmate leaves with less filamentous tips.
Washingtonia is a palm that can be propagated by seed. Propagation must be carried out in a seedbed protected with soft and moist soil. The plants grown will subsequently be transplanted to the ground in spring.
For the choice of the most suitable soil, we must aim for rich, dry and drained soils with sand and pumice stone. However, it grows well in sandstone, loose soils and does not tolerate wet soils.

For the exposition, also considering its origins, it is advisable to choose a bright environment with direct sun, but also appreciates areas with some hours of shade during the day.
The Washingtonia is a plant that adapts to the most diverse climates anyway, well tolerating the warm ones but adapting to live in colder climates where it can bear even the most intense frosts.
The only care is not to plant it in areas subjected to freezing and strong winds as the plant would suffer from it at the vegetative level. For this reason, in colder areas, it must be placed in areas more sheltered from cold winds.
Irrigation is only necessary for plants of a few years, after which the adult plants are satisfied with rainwater; however it is advisable to irrigate them in the drier periods. Obviously in winter the irrigation is superfluous and could be harmful for the onset of rot.
For fertilizing it is advisable to supply abundant organic fertilizer, such as mature manure, during the planting phase. The fertilizer should be mixed 50% with the soil removed from the hole. Subsequently it is possible to intervene every year, in the period of late winter, always bringing organic substance and mixing it with the first layers of soil. Never use nitric nitrogen.
Washingtonia, like other palms, should not be pruned; it is necessary to have only the shrewdness to periodically remove the dried and sick leaves, also for a matter of aesthetic nature.
Among the diseases and pests, also the Californian palms must be subjected to the attack of the red awl. This parasite is very dangerous and can lead the plant to death even in just one year. Due to the characteristics of this insect, if its presence is to be ascertained it is compulsory to notify the relevant phytopathological offices by territory.