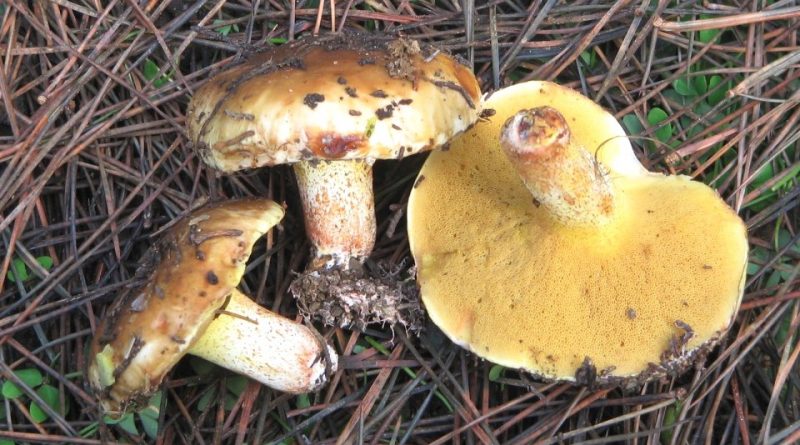 Etymology –
The term Suillus is the diminutive of sus, súis, pig: piglet, for the particularly abundant size of this genus. The specific epithet bellinii is in honor of the Catanese musician Vincenzo Bellini (1801-1835).

Geographical Distribution and Habitat –
Suillus bellinii is a species that grows along the coasts in coniferous woods (maritime pine, domestic pine), in temperate climate zones, its typical habitat is therefore that of the Mediterranean xerophilous pine forests, less common and widespread than the roommate S. collinitus . It grows faithfully and in favorable years, abundant in some stations. The fruiting period is in spring-autumn and also in winter in warmer weather conditions and in the absence of frosts. 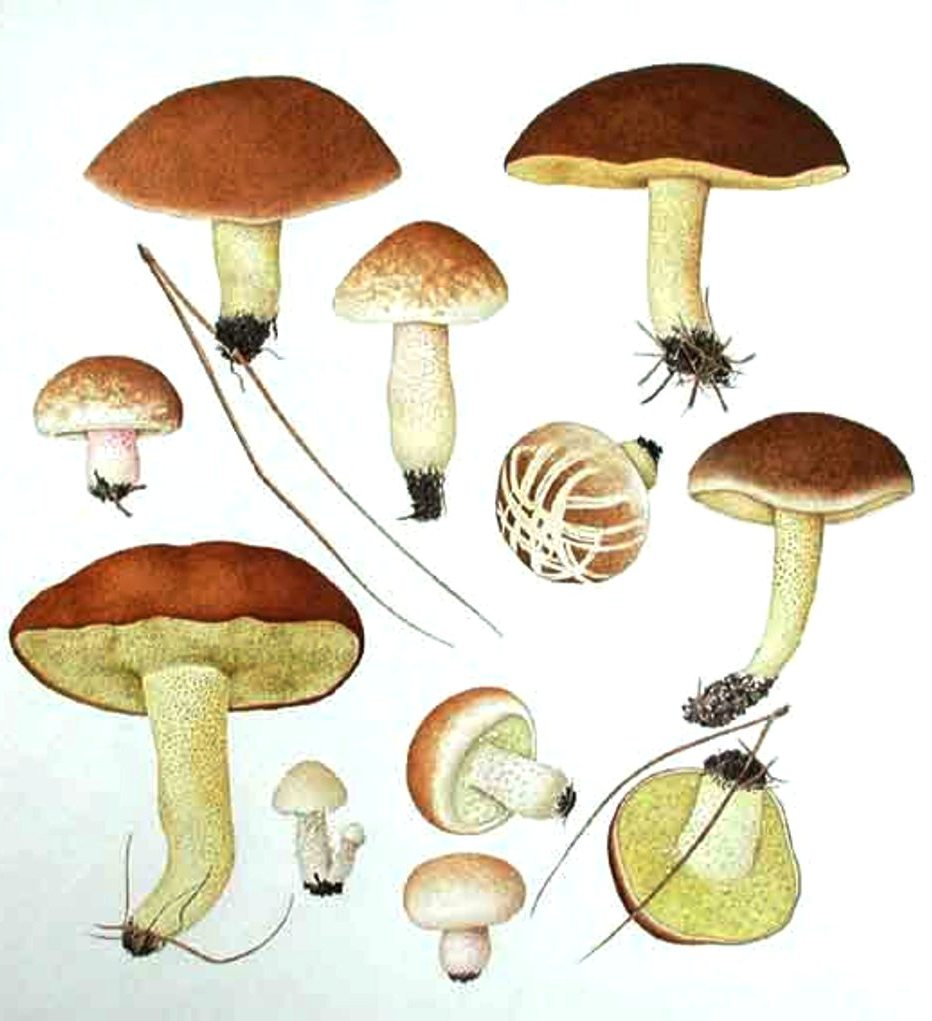 Recognition –
It is recognized by the hat of 6-14 cm of diameter, of not very regular shape, initially hemispherical, then convex to become flat; the cuticle is a bit glutinous, but dry in dry weather, it is easily separable, with a variable color, first whitish, then brown with nuances and patches of hazelnut or olive, which tends to lighten towards the edge.
The tubules are adnate or slightly decorrente, with first whitish and then yellow coloration.
The pores are wide, angular, with initial coloration from whitish to yellow-cream, to then become yellow-greenish-olive.
The stem measures 3-6 x 2-3 cm; this is full, often short and stocky compared to the size of the hat, curved and attenuated towards the base; the surface is whitish or straw-colored markedly and thickly covered with elongated points or red-wine-colored granulations, then brown, more numerous upwards.
The flesh is quite firm but becomes soggy in the mature fungus, with a white-yellowish color and pink under the cuticle; it has a fruity and sweet taste.
At the microscope we note yellow-ocher spores in mass, of 7.5-9.5 x 3.5-3.8 µm, elliptic-fusiform, smooth, guttulate, apiculate.

Cultivation –
Suillus bellinii is not a cultivated mushroom.

Uses and Traditions –
Suillus bellinii is distinguished from other similar Suillus by the initially almost entirely white color of the cuticle, then whitish only at the edge, pores initially pinkish white, then cream yellow, often short stem and covered with elongated red-brown granulations, white flesh and habitat Mediterranean at low altitudes and in late season, preferably at Pinus halepensis.
However this fungus, especially for the less practical, can easily be confused with other Suillus that share the same habitat; among these we mention: Suillus collinitus (Fr.) Kuntz., Suillus granulatus (Linn.: Fr.) Rouss., or Suillus mediterraneensis (Jacq et Blum) Redeuilh, which differs however in the color of flesh, yellow and not white.
It is the most prized “pinarolo” from the gastronomic point of view, also in consideration of having a rather compact meat.

Preparation Mode –
The taste of Suillus bellinii is sweet and very pleasant and the aroma is fruity. However, if they are prepared on their own they should be consumed in moderation as they can have a slight laxative effect.
At the time of cooking the hat cuticle must be eliminated. This operation is to be performed only at the last moment because the cuticle is used to protect and preserve the fungus itself. Even the stem is eliminated because it is too hard and therefore not very suitable for consumption. This mushroom, like other pinaroli, is perfect for creating mixed mushroom preparations. Their presence in the mushroom mix enhances the taste of the whole dish, making particularly intense and slightly spicy notes.
In Italy these mushrooms are often included in packages of frozen mixed mushrooms where they are carefully dosed to give the preparations a distinctive flavor, while they are never consumed dried.
A typical recipe of these fungi provides for:
– clean the mushrooms and remove the rubbery cuticle from the Suillus hat. Cut them into pieces, throw them in plenty of boiling water and boil for 10 minutes. In a pan put the oil, the chopped parsley and the garlic divided into two parts, heat well, without frying, pour the drained mushrooms, turn them well, add the salt and cover them with a lid. When they begin to fry, uncover them and let the water dry by mixing with a wooden spoon. Add the chopped tomatoes, season with salt and cook, stirring often. Serve alone or as a condiment for pasta.