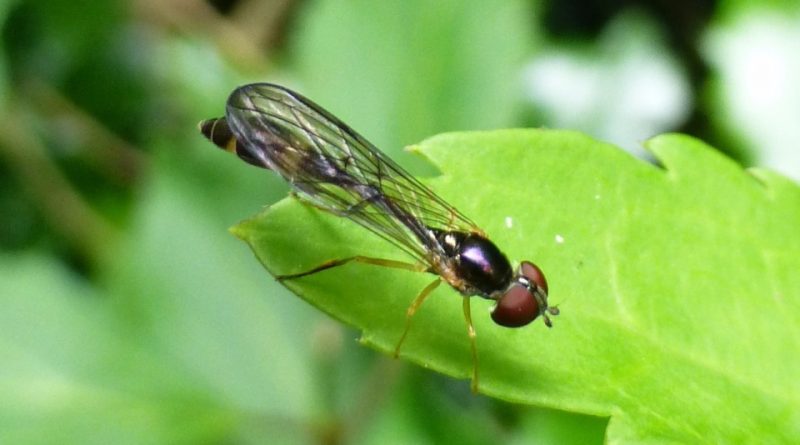 Geographical Distribution and Habitat –
Baccha elongata is a syrphid present in most of Europe and North America and is also present throughout Italy.
It is a fairly common insect whose habitat is represented by shady environments, in particular woods, both deciduous and coniferous. However, it is also present in anthropized environments such as hedges, urban woods, etc. The adult generally flies low among the dense vegetation; rarely found in open environments, where it still flies between the herbaceous vegetation. For this reason it is often not noticed and probably less frequent than it actually is. Visit a very wide range of flowers belonging to various families (Compositae, Rosaceae and Umbrelliferae).
The flight period is from April to October.

Morphology –
The Baccha elongata is recognized as it is an insect that can reach a length of 7-11 millimeters with a length of the wings of about 4.5 – 8 mm, which are transparent or only slightly brown.
The body is long and very thin and differs from the other syrphids in its elongated, thin and slightly narrow abdomen (petiolate) in the basal part. This abdomen is black with a yellow spot on the 3rd and 4th segment. The legs are brownish yellow. The forehead is brightly hairy.
As in most of this species the sexes are distinguished from the eyes: in the male they meet on the top of the head, while in the female they are separated.

Attitude and biological cycle –
The adults of Baccha elongata can be seen flying from the beginning of spring until autumn, completing two generations: one from April to June-July and the other from September-October until the temperatures become rigid. This species winters at the larva stage. The adults feed mainly on Compositae pollen and nectar, Rosaceae (Alchemilla xanthochlora, Apiaceae (Angelica sylvestris, Heracleum sphondylium) and Hedera. As with most other members of the Syrphinae subfamily, the larvae of this insect are predators of aphids.

Ecological Role –
Baccha elongata, like other hoverflies, plays an important ecological role in this aphidiphagous. The larvae of this insect are in fact predators of a wide range of aphids that live mainly on herbaceous and shrubby plants, such as euphorbia, elderberry, jeracio, etc.
Unfortunately the use of biocides in general and of the aficides in particular are significantly altering the populations of the sirfidi with an accentuated imbalance of the biocenosi and the biological cycles, unfortunately to own advantage of the aphids and of other insects that feed on agrarian species.
For this reason it is necessary to rebalance the model of agricultural production by drastically reducing specialization, thus increasing the biodiversity of the cultivated species and the ecological integration of farms with the surrounding environment.