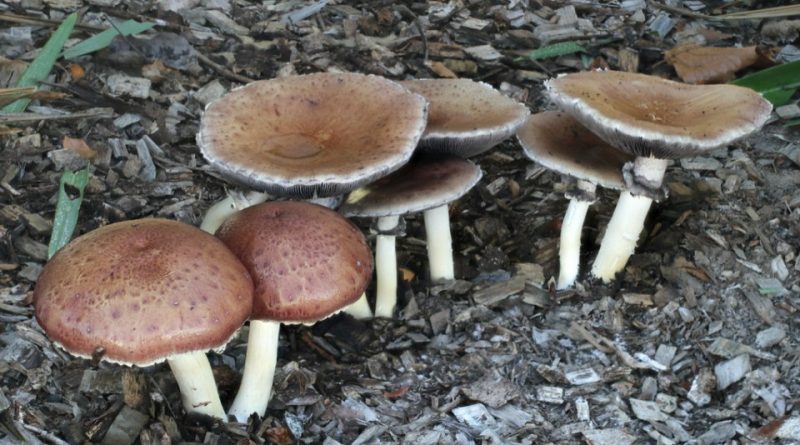 Systematics –
From the systematic point of view it belongs to the Eukaryota Domain, Fungi Kingdom, Basidiomycota Division, Basidiomycetes Class, Agaricales Order, Strophariaceae Family and then to the Stropharia Genus and the S.rugosoannulata Species.
The terms Psilocybe rugosoannulata (Farl. Ex Murrill) Noordel are synonymous. and Stropharia ferrii Bres.

Etymology –
The term Stropharia comes from stróphium, pectoral fascia, used by girls to tighten the breast: in reference to the ring or its traces often present on the stem of these mushrooms. The specific epithet rugosoannulata derives from rugosus rugoso, wrinkled and annulatus with a ring.

Geographical Distribution and Habitat –
Stropharia rugosoannulata is a saprotrophic species that grows in the wild or cultivated on humus-rich soils and with vegetable debris, such as fields cultivated with corn, especially with equine fertilizer or in any case on very nitrogenous soil; it is also signaled on sandy soil. This mushroom bears fruit especially in spring and more rarely in autumn.
In its spontaneous state it grows gregariously on woody residues of broad-leaved woods, often on sandy soil. It is present in Europe and North America, and also introduced in New Zealand. 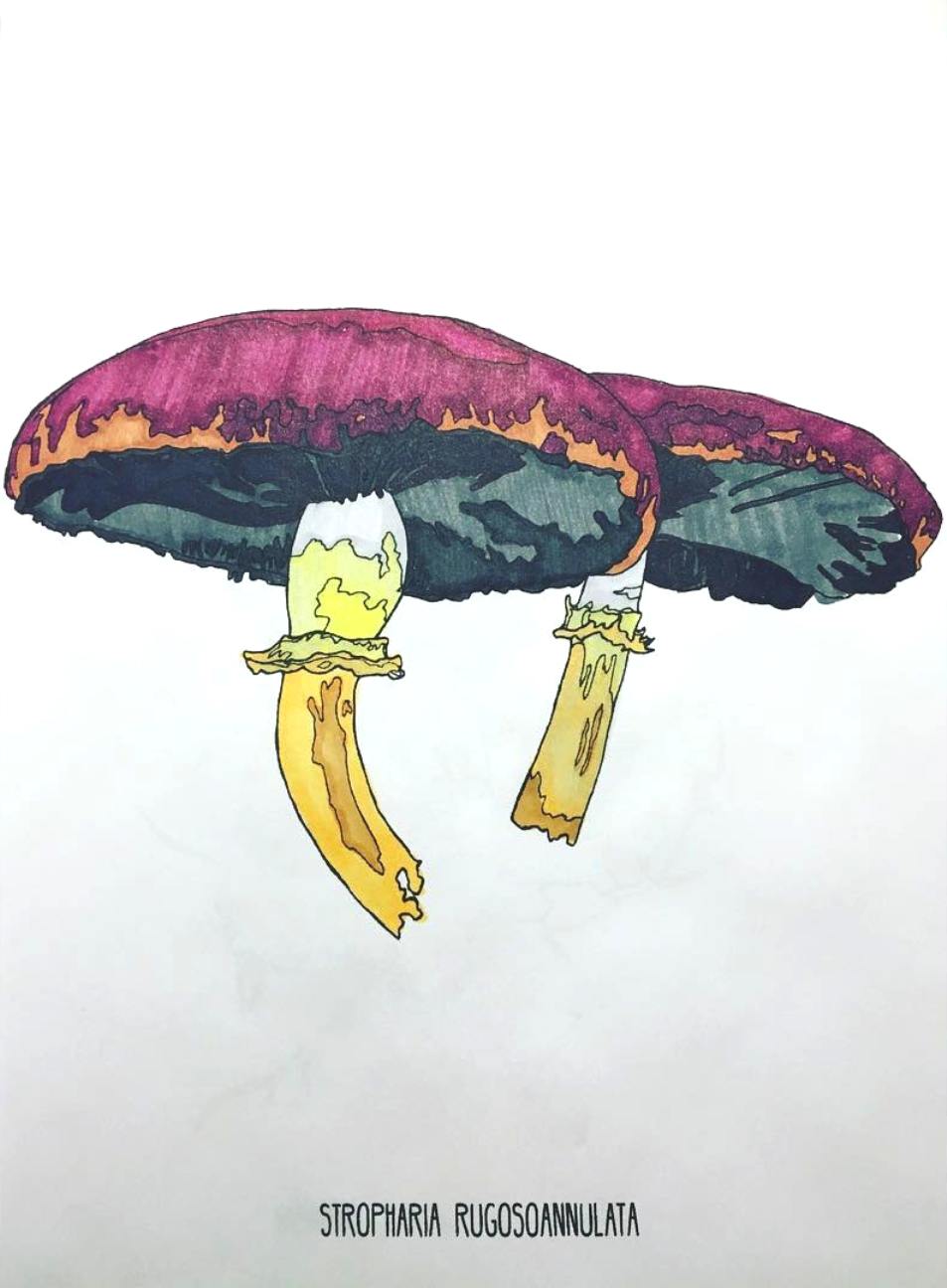 Recognition –
This fungus is recognized as the carpophore can reach dimensions of 15 – 20 cm and over in diameter. The color of the hat can be of various shades, from reddish-brown, vinous red, violet (yellow in Stropharia rugosoannulata f. Lutea).
The lamellas are adnate, dense, ash gray, violet with white thread. Cylindrical jamb, attenuated at the base, white, pale yellow at the base, often with rhizoid cords, in some cases widespread and branched, it presents a ring with typical streaks.
The stem is tall and is surrounded by a rough ring, from which the name originates.
The flesh is firm, whitish, with a characteristic, almost metallic odor and initially mild and therefore slightly bitter.
At the microscope we can see ellipsoidal spores, 11-13 × 6-9 μm, smooth, with germinative pore, blackish brown with a purplish brown color.

Cultivation –
Stropharia rugosoannulata is easily cultivable on a substrate similar to the one on which it grows in the wild. Some studies have shown that this fungus can be grown very well on the same soil as corn. Furthermore, finding its own preferred conditions, this fungus can also grow in other types of cultivation, for example of medical herbs cultivated for herbal purposes.
Both the typical form of this mushroom and the lutea form often grow in the same station and at the same time, without, however, the respective specimens being mixed.

Uses and Traditions –
Stropharia rugosoannulata, unlike most mushrooms of the genus Stropharia, is an edible mushroom, described as very tasty by many authors, and cultivated commercially especially abroad. It is present in the list of marketable mushrooms in Italy.
It is cultivated and marketed abroad, especially the lutea variety, but its edibility is controversial; in fact there have been minor gastric disturbances, probably due to collections in polluted places or to food abuse.
This mushroom, due to the large size of the carpophore, is also called “mushroom godzilla” .This mushroom, due to the consistency of its flesh, with its immutable white color, and size, immediately found favor with its discovery. Once found the possibility of cultivating it on preferential growth substrate easily reproducible in an artificial way, it has also become a commercially cultivated species in Central and Northern Europe, especially in Germany, Austria and the Netherlands, as well as at amateur level.
However, in recent years mild intoxications have been reported, mostly due to gastrointestinal intolerances; they seem to have been caused by specimens grown in the wild, so some authors believe those from controlled cultivation to be safe. Instead, other authors prefer to follow a more cautious line and advise against eating it.
The large size and fleshiness of the specimens, together with the color of the lamellas, make it possible to identify this fungus with ease.
The only species that could deceive the less experienced could be the Stropharia hornemannii (Fr.) S. Lundell & Nannf., Also of good size and with a similar coloring especially in the young specimens, which however has a stem covered by fluffy scales . In the event that the scales are removed due to excessive manipulation or due to atmospheric conditions, the ring can be observed in S. hornemannii which is fleeting and thin, while in S. rugosoannulata it is broad, persistent and superiorly streaked.
Furthermore, the young specimens, with closed cap and hymenophore with not yet visible lamellas, may appear so squat to resemble a porcino, especially in the case of a hat with a dominant brown color. S. eximia Benedix is ​​also mentioned in literature, probably due to a completely depigmented form, ie with a white cap, of S. rugosoannulata.
A 2006 study showed that Stropharia rugosoannulata has the ability to attack the nematode Panagrellus redivivus; the fungus produces spiny cells called acanthocytes that are able to immobilize and digest nematodes.

Preparation Mode –
This mushroom for the consistency of the meat could be consumed, cooked and preserved in various ways. To this day remains the doubt about its certain edibility given the cases of slight poisonings that occurred in various parts of the world. One reason could be the presence of specimens collected in the wild, not certain.