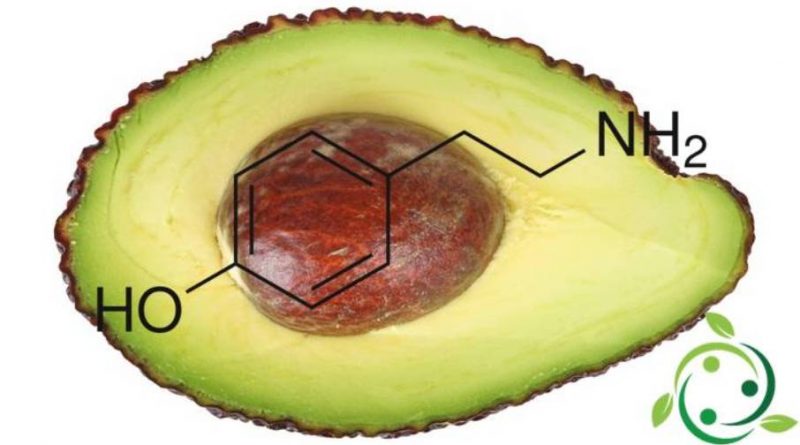 Tiramina, whose term in the official IUPAC nomenclature is: 4- (2-aminoethyl) phenol is whose brute or molecular formula is: C8H11NO is an amine derived from the amino acid tyrosine. It is a substituted phenylethylamine.
Tiramine is an amine very present in nature and especially in living beings and is synthesized by decarboxylation of tyrosine following fermentative processes or bacterial decomposition.
Tiramine is present in good concentrations in some foods; These include: smoked herring, aged cheeses, yoghurts, processed meats (chicken liver, cured meats and sausages), soy sauce, aged red wines, in fish in general, in chocolate and in some vegetables such as avocado, figs, broad beans, ripe harvested bananas (in addition to dopamine and tryptamine), coffee, etc. It is also contained in soups in pouches or canned, in yeast and in alcoholic beverages.
Tyramine is a sympathetic mimetic, a compound that is able to stimulate the release of norepinephrine from neuronal vesicles causing vasoconstriction, with increased heart beats and blood pressure.

For this reason, a high intake of tyramine (with an intake of tyramine between 200-800 mg) through food can cause the so-called “pressure response to tyramine”, which causes an increase in systolic blood pressure of 30 or more millimeters of mercury.
Tyramine is also one of the main substances to which are attributed the effects linked to drunkenness and the consequent headache.
It is also a molecule responsible for some forms of food intolerances.
For those suffering from migraine it is advisable to reduce the intake of foods rich in tyramine.
In fact, most of the effects of tyramine would be explained by the release of catecholamines and serotonin which would act as cerebral vasodilators, with an increase in capillary permeability and perivasal edema.
The edema, stretching the perivasal nerve endings, would cause headaches, irritability, photophobia and nausea, all symptoms underlying migraine pathology.