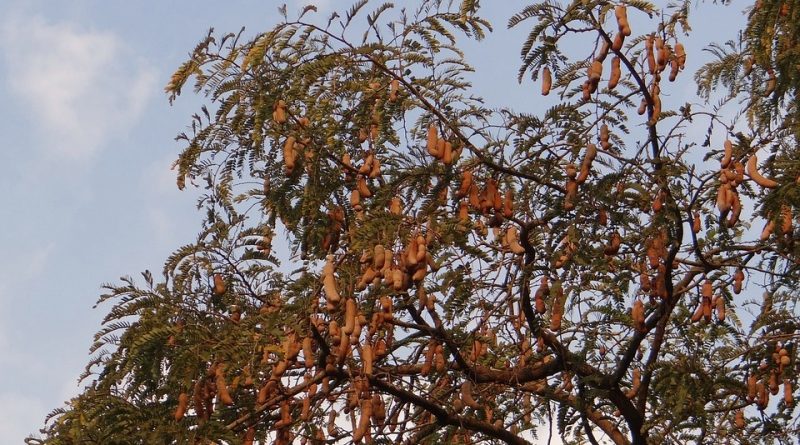 Systematics –
From the systematic point of view it belongs to the Eukaryota Domain, United Plantae, Magnoliophyta Division, Magnoliopsida Class, Fabales Order, Fabaceae Family, Caesalpinioideae Subfamily and therefore to the genus Tamarindus and to the species T. indica.

Etymology –
The term Tamarindus comes from the Arabic tamár híndi, an Indian date. The specific epithet indicates from the Indies:

Geographical Distribution and Habitat –
Tamarind is a tropical species native to East Africa and India, but now present in tropical Asian and Latin American areas.

Description –
Tamarindus indica is a plant with underdeveloped stems, with a base diameter that normally reaches 80 cm, while the branches also reach 25 meters in height.
It is a tree, broad-leaved and evergreen, massive, with slow growth and is long-lived, becoming centuries-old; in favorable conditions it can even reach a height of thirty meters and more than seven meters in circumference. The wood has a hard and compact marrow, dark red, around it is more yellowish.
It has alternate leaves, paripinnate, briefly petiolate, shiny on the upper side and pale on the lower one. The leaflets are small, opposite, close together, oblong, obtuse and hairless. The leaves are deciduous during the dry season only in places that have a particularly long dry season. The flowers are large, yellow with red or orange stripes, irregular, gathered in raceme inflorescences. The fruit is a hazelnut-colored legume, indehiscent, almost cylindrical, generally 10-15 cm long, slightly curved, and contains up to a dozen whitish seeds. Under normal conditions, the tree bears fruit not before its sixth-seventh year of age.

Cultivation –
Tamarind is a plant that has no particular cultivation requirements but obviously needs direct sun and high temperatures due to its tropical origin.
It grows well also near the sea and therefore on the coasts where the soil is more saline. It has no problems developing in clay or sandy soils and the optimal pH is neutral. Its limitations are more in the production of fruits because it needs a tropical-warm climate and sometimes, even when cultivated in the milder areas of Italy, it risks not bearing fruit or causing the pods to rot due to too much humidity.
The tamarind fears very cold temperatures with prolonged frosts, while if the temperature drops for a few days it has no particular resistance problems. Only the first years of growth can be less rustic, but in general the tamarind is a very robust tree. Irrigation must be regular even if it does not require large quantities of water; it can suffer from humidity, especially when accompanied by cold temperatures.

Uses and Traditions –
Tamarind is a plant used for feeding, for ornamental purposes and also for its medicinal properties. An ancient Eastern proverb says: “he who plants tamarinds does not collect tamarinds”. This is due to its slow growth and sprouting.
Tamarindus indica contains an active ingredient (tamarindine) which is active against aspergillus niger and candida albicans. Experimental studies have shown its particular efficacy against Staphylococcus aureus, Bacillus subtilis, Escherichia coli and Pseudomonas aeruginosa.
Pulp, leaves and bark have medical applications.
For example, in the Philippines and Sudan the leaves have traditionally been used for herbal teas useful to counter malarial fevers. In India it is used in Ayurvedic medicine for gastric or digestive problems and against toothache. In Italy its properties were already known at the time of the Salerno Medical School, Pietro Andrea Mattioli (1500) defined it useful “to move the body”. In low doses it regulates intestinal function, while at higher doses it has a laxative effect.
Of the tamarind is used the pulp of the fruit, suitably purified by dissolving it in boiling water, it is then sieved and the liquid obtained is concentrated in a bain-marie or placed to dry in the sun; contains sucrose, tartaric acid, citric acid, malic acid, potassium tartrate, rubbery and resinous substances, starch, etc.
Moreover, thanks to its density and durability, the heart of tamarind wood can be used to make furniture and ceilings.
The leaves are used in India and Africa to feed silkworms of the genera Anaphe or Hypsoides, which produce a silk considered to be of superior quality.
Leaves and flowers are also used as mordants for fabrics and straw hats.
The aqueous extract of the leaves is used to fight the Schistosoma parasite.
Tamarind trees are also widely used in India – particularly in Andhra Pradesh – to provide shade on the roads.
The fruits of the tamarind are also very much appreciated by monkeys.