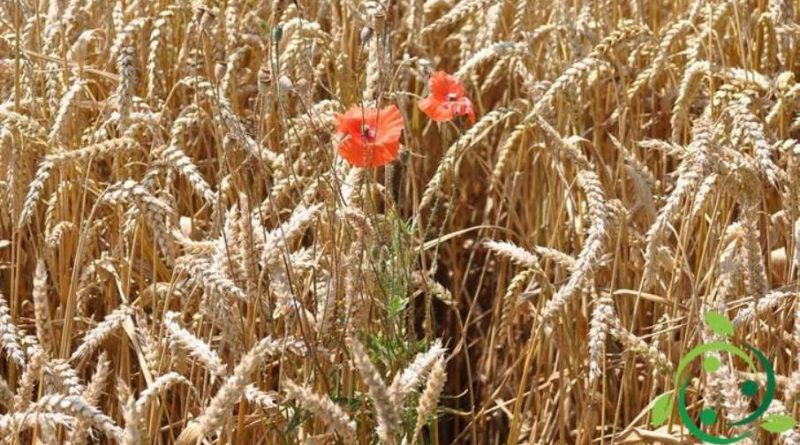 How to grow wheat in an organic way

Durum wheat (Triticum durum Desf.) Is a herbaceous species of the Poaceae family. It is a tetraploid wheat, widely cultivated, worldwide, for processing into flour.
The cultivation of wheat in a biological manner is certainly a topical subject not only for the health benefits on nutrition but also for the ecological effects that it entails for the extensive planetary cultivation.
In this sheet we will see, therefore, how to grow wheat in an organic way, following some simple agronomic advice.
Let’s start with the organic supply of the soil.
The organic supply to ensure the cultivation of organic wheat, in pre-seeding, is very important and can be done or with a manure, bringing 350-450 quintals per Ha. This operation must be done during the sowing of the crop that precedes the organic wheat, or with a pelleted organic fertilizer at a dose of 5-7 quintals per Ha.
As far as nitrogen is concerned, this should be divided into two stages, at sowing and at the end of winter, combining it with a weeding harrow passage to favor mineralization and control weeds. It is important to avoid nitric nitrogen but if possible using the ammonia or urea nitrogen that, for the lotus more gradual release, is more suited to this type of cultivation and, moreover, avoids the excessive softening of the plant, during the doffing phase, which could then lead to attacks by various parasites.
Another important technique is that of false seeding to eliminate as many weeds as possible before sowing organic wheat. This operation must be carried out lightly, 15 days before sowing.
As for the variety choice, it is good to opt for varieties resistant to fungal diseases certified for organic farming. And too dense sowing should be avoided, so it is necessary to operate at 2.8-3 ql / ha of seed and avoid the re-stagnation, as well as the close succession to maize. Interesting is instead the use of varieties of ancient grains that for their greater size ensures greater control of weeds to give them greater competition. In this sense, the nitrogen supply through manure is a joint action of unquestionable value.

The minimum rotation allowed by the organic is three years, but it would be better to reach four, making the wheat precede a legume that leaves nitrogen of organic origin in the soil.
An interesting technique can be that of the intercropping.
The recourse to the associated crop with self-seeding clover (Trifolium subterraneum) represents an interesting technical itinerary that allows to cover the ground for the whole arc of the year.
The legume maintains high availability of nutrients, in particular that of nitrogen, fixing it directly in the ground and controls the development of weeds between the rows.
The land remains covered for the entire summer by crop residues and with the first autumn rains; the clover begins to vegetate, completely covering the ground, which can be used for grazing or green manure.
Wheat and clover are sown simultaneously in autumn. The distance between the twin rows of grain (12.5 cm on the rails and 37.5 cm between the rails) allows to insert a band of underground clover. The quantity of seed in the plant is halved for both species compared to that normally used for the respective pure crops. It is possible to make changes to the seeders to sow both species in a single operation.
However, the grains that seem to benefit most from this intercropping are the low-sized ones, which do not shade the clover, have a good body and are rustic.
However the wheat is sown (alone or associated), then, after an emergency has occurred, it is advisable to carry out a grooming to eliminate any pests and to aerate the soil, while during the setting, if soil conditions permit (ie if there is no ice and there are no stagnations, especially in the regions located at greater latitudes), a grooming is done in the opposite direction to the previous one.
Now let’s look at the prevention plan against fungal diseases.
Certainly a preventive treatment must be carried out based on cupric products, such as copper hydroxide, copper oxychloride, tribasic copper sulfate, cuprous oxide; in fact the use of copper will be increasingly diminished over time, both because it is a heavy metal, and because it is possible to start programming, but on small trial parcels, to test the method in your agro ecosystem, treatments based on others products such as: lecithins, bicarbonate of potassium, etc. which must however be accompanied by careful observation.
However, after 15 days, a treatment with specific products, such as mycorrhizal fungi and rhizosphere bacteria, should be performed to activate the self-defense systems in the plant towards the main fungal diseases.
A further grooming may be advisable at the rising. Moreover, if there is the danger of oidium, septoria and rust attacks, it is possible to intervene with sulfur-based treatments that also serve to improve the quality parameters of the grain.
Along with the fungicide treatment, a foliar treatment with organic nitrogen-based products enriched with amino acids and microelements is necessary to keep the wheat foliar apparatus vital. Finally, with the complete spike it is possible to carry out a treatment with copper and sulfur that “covers” the crop up to the harvest.