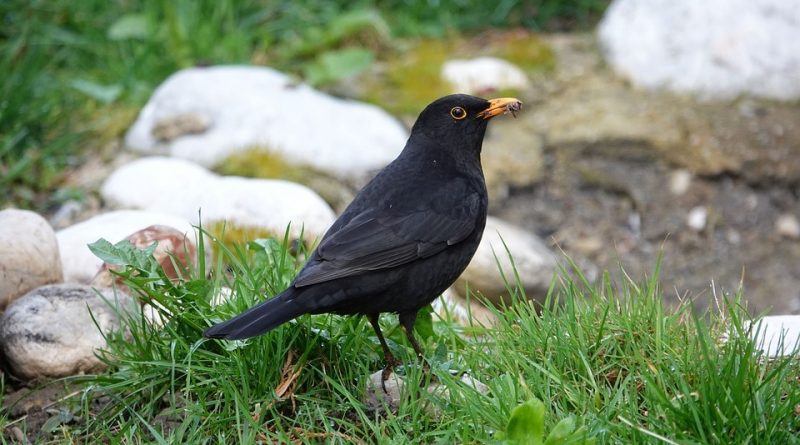 The Blackbird (Turdus merula Linnaeus, 1758) is a passerine bird belonging to the Turdidae family.

Geographical Distribution and Habitat –
The Blackbird, after the sparrow, is the most widespread bird in Europe, with the exception of northern Scandinavia, and in Italy. It is also present in Asia, in north-western Africa, in the Canaries and in the Azores.
The natural habitat of the blackbird is the forest, but it adapts to living in any environment where there are the conditions to nest: it can in fact be found in orchards and vineyards and in urban areas in close contact with man.
Turdus merula reproduces in Europe, Asia and North Africa, and was introduced in Australia and New Zealand.
It has a certain number of subspecies related to the different habitats of the globe, among these we remember:
– T. m. merula, the named subspecies, which commonly grows in most of Europe. A small population grows in the Nile valley and is present in the Mediterranean including Cyprus and North Africa. The birds introduced in Australia and New Zealand are of this subspecies.
– T. m. azorensis is a small breed that breeds in the Azores. The male is darker and shinier than a merula.
– T. m. cabrerae, which we find in Madeira and in the western Canary Islands.
– T. m. mauretanicus, which we find in central and northern Morocco, in coastal Algeria and in northern Tunisia.
– T. m. aterrimus living in Hungary, southern Greece, Crete, northern Turkey and northern Iran. 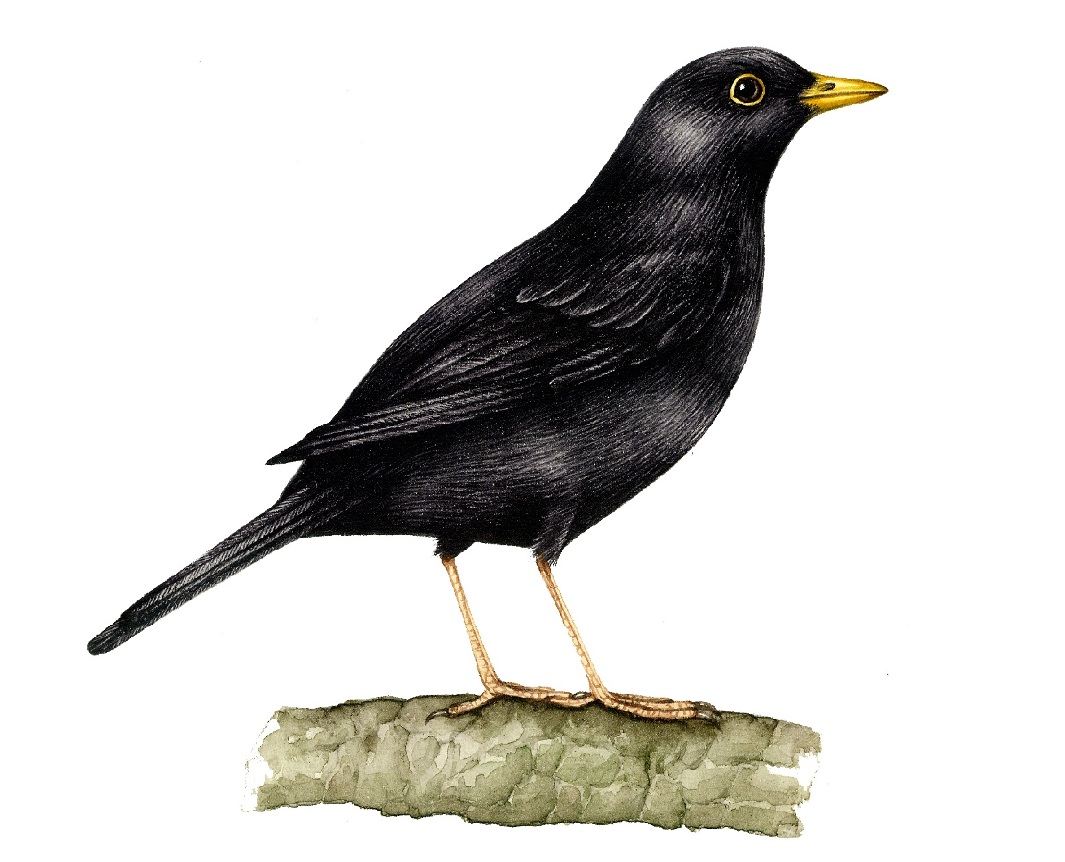 Description –
The Turdus merula is recognized by some essential characters, despite having a certain sexual dimorphism. The male is up to 25 centimeters long and presents a plumage generally completely black or dark brown, with a beak and eye contour of a bright yellow color that tends to orange. The legs are brown and scaly.
The female is on the other hand smaller and longer from 15 to about 22 cm, with a dark brown color, with a lighter, streaked throat. The juveniles and the females present a brown coloration of the beak, instead of yellow or orange. In the male specimens are sometimes present phenomena of leucism, which is highlighted with the white color of part of the primary remiges or caudals.
In some cases, phenomena of albinism may be present, giving rise to individuals with white bodies and red eyes.

Biology –
Blackbirds are birds that generally live in isolated pairs but, during migration, they tend to become more social and gather in flocks.
In natural conditions the life of a blackbird is 2 or 3 years, but if bred in captivity and in favorable conditions they can live much longer, reaching 15-20 years.
These are omnivorous animals that feed mainly on fruit, berries and small invertebrates, such as cockroaches, earthworms, etc.
For its reproduction the female blackbird builds a nest on the branches of trees, in the bushes or in holes in the ground.
Within this the female lays from 4 to 6 eggs of blue-gray color and irregularly spotted with gray dots three times a year.
After careful observation, it can be seen that the nest is built at heights from the ground, depending on whether it is a first, second or third brood.
The incubation period of the eggs goes from fourteen to fifteen days and the brooding is mainly cured of the female, even if, rarely, also the male can collaborate.
During the winter the blackbird moves from the northernmost countries to the warmer ones, while in temperate areas, such as Italy, it is present throughout the year.

Ecological Role –
The male blackbird protects and defends its breeding ground, chasing away other males by performing a ritual consisting of a short run, where the head is first raised and then bent together with the tail.
If a battle occurs between male blackbirds, usually the intruder is soon thrown out.
Also the female blackbird can be aggressive, especially in spring when it competes with other females for a good nesting area, and even if the fights are less frequent, they tend to be more violent.
As long as it is available in winter, both the male and the female will remain in their territory throughout the year, while occupying different areas. Migrant Turdus merula species are more sociable, travel in small groups and feed on wintering grounds. The flight of migratory birds is characterized by moments of rapid flapping of the wings interspersed with moments in which they glide or sustain themselves in air currents.