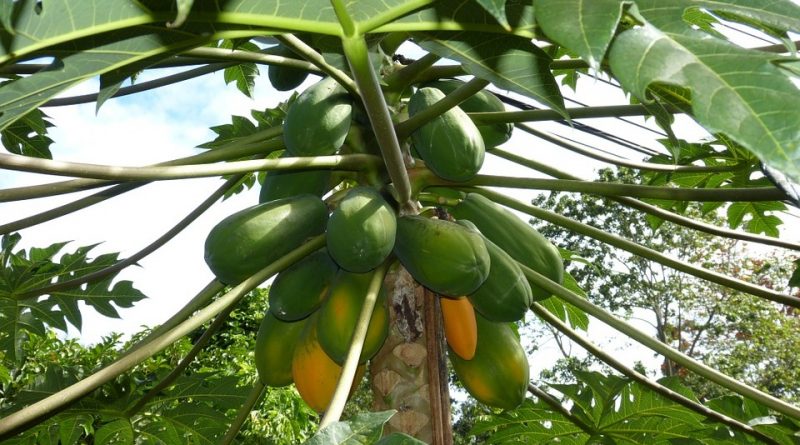 The Papaya (Carica papaya L.) is an arboreal species belonging to the Caricaceae family.

Systematics –
From the systematic point of view it belongs to the Eukaryota Domain, Plantae Kingdom, Magnoliophyta Division, Magnoliopsida Class, Magnoliidae Subclass, Violales Order, Caricaceae Family and therefore to the Genus Carica and the Species C. papaya.

Etymology –
The term Carica comes from the ancient Greek Καρία Caría, in Latin Caria, in Turkish Kariye, in Arabic karwija, name of a fig tree, placed by Linnaeus for the similarity of its leaves. “Specific papaya epithet comes from the Spanish-American papayo, in turn derived from the Caribbean vernacular term ababai.

Geographical Distribution and Habitat –
Papaya is a species native to Central America, known and used throughout America for many centuries, although today it is grown in many countries on other continents, mainly in Asia and Africa. It lives in tropical environments (Central and South America and Asia Pacific) at temperatures that must never fall below 0 ° C to avoid rotting and is very common in Brazil and the Hawaiian Islands. In the Mediterranean it is cultivated in Israel and, in Italy, only in Sicily, where it must be cultivated, in winter, under a greenhouse, with considerable problems for production. 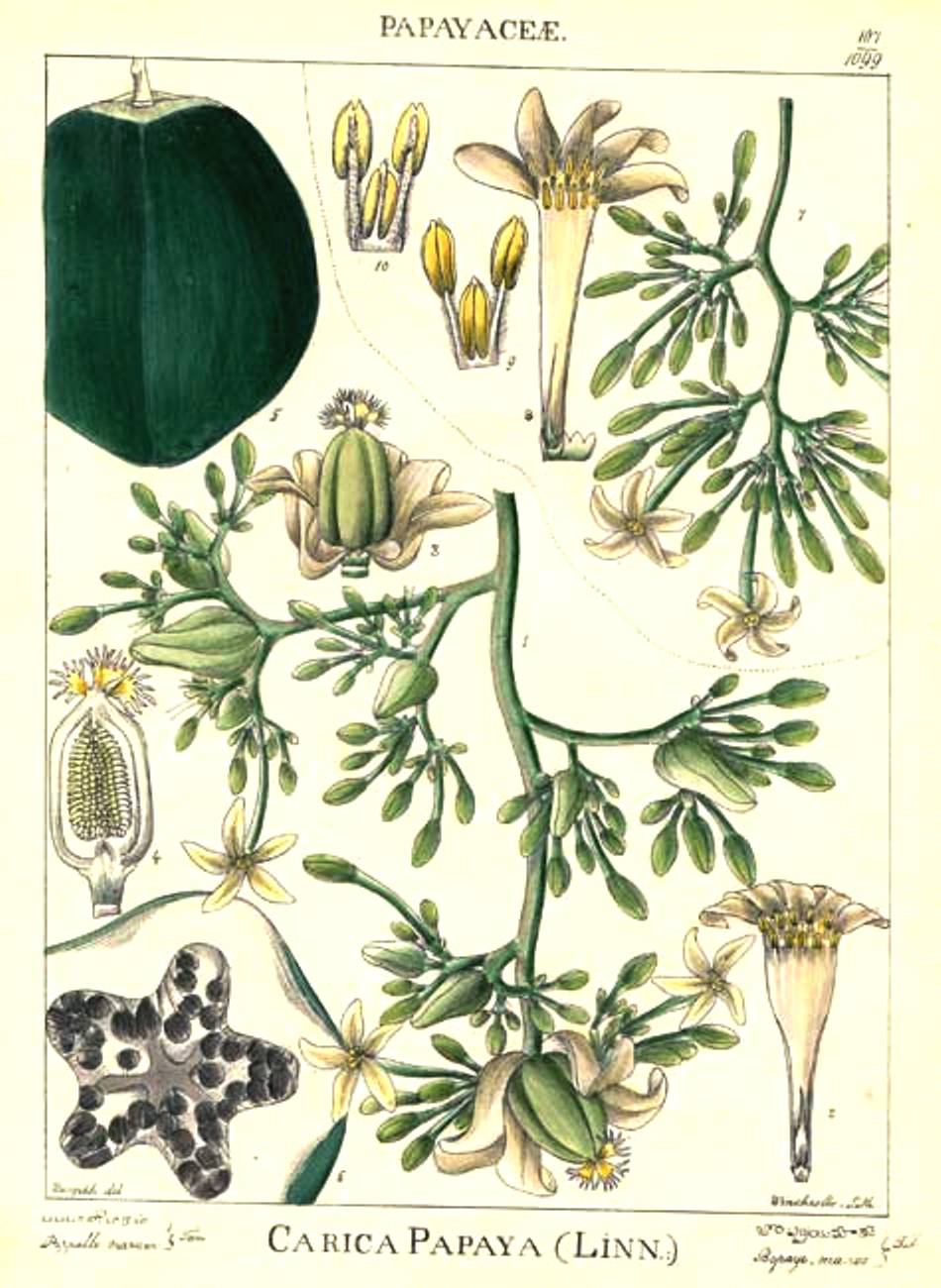 Description –
Carica papaya is a small arboreal species, with a stem up to 5–10 m tall, which looks like a small little branched tree. The trunk, even in mature specimens, has a tender, slightly woody texture, and presents scars produced by the growth and fall of the upper leaves. The sap is milky in consistency and toxic in the natural state for ‘human being, being able to produce allergic irritations upon contact with the skin.
The leaves are arranged in a rosette at the apex of the trunk, they are palmate-lobed and 50–70 cm in diameter.
The flowers are produced in the armpit of the leaves. Papaya has a very complex floral biology. There are dioecious plants and plants with hermaphrodite flowers.
If the pollen of hermaphroditic flowers fertilizes hermaphrodite or female plants, plants with hermaphroditic or feminine flowers are obtained, while if the pollen of male plants fecundates plants of female plants, we have male, female and hermaphrodite plants. The dimorphism of the flowers is very evident; in fact the female ones, solitary or grouped in small groups and axillary, are light yellow, while the male ones, inserted on long axillary racemes, have a pale yellow monopetal corolla in the shape of a tube.
The fruit is a berry characterized by a very variable shape and size, more or less orange that contains small black seeds, covered with a mucilaginous film.

Cultivation –
The Papaya is a very demanding plant in terms of soil; the soil must be dissolved and allow a rapid percolation of the water in order to avoid root and collar rot; the temperature must never fall below 0 ° C. Papaya is propagated by seed, bred according to natural forms and with planting widths of 3 x 3 meters and does not require pruning operations.
It is a plant that benefits particularly from organic fertilization. The plants, once implemented, can be pollarded and renewed with one of the many shoots.
The fruit picking technique is manual; this is done from November to June. Production can reach up to 150 quintals / ha. The most interesting varieties are “Solo”, “Kapoho Solo” and “Sunrise”, all with fruits weighing less than 0.5 kg.

Uses and Traditions –
In Mexico, this plant, before the arrival of the Europeans, was called Chichihualtzapotl, which in the Nahuatl language means “sweet fruit (da) nanny”, and was a fruit particularly connected with fertility.
In the Philippines the fruit of the papaya is the subject of industrial cultivation of great importance for the country’s economy. Of particular value is the cultivation on the island of Guimaras, known for the great variety and quality of fruit plants.
The papaya has a delicate consistency and an oblong shape and can be green, yellow, orange or pink. The fruit can weigh up to 9 kg but, for marketing purposes, in most cases it should not weigh more than 500 or 600 g, especially in the varieties of dwarf plants, very productive and generally intended for export, to be more transportable and last longer after the harvest until they are consumed. The size of the fruits decreases according to the age of the plant.
Papaya is also a fruit rich in provitamin A and ascorbic acid. In addition to being consumed as fresh fruit, in smoothies, pastries and preserves, the immature fruit is consumed in many countries as a vegetable prepared in different ways. Papaya latex contains papain, an enzyme with numerous applications in the food, cosmetics and pharmacopoeia industries. In folk medicine, papaya is used as a digestive.
In Panama they use latex from the leaves to eliminate warts. Other uses of papaya in tropical America are anthelmintics and antidiarrheal.
Papaya is extracted from the papaya, an active ingredient with a proteolytic function. Contrary to popular belief it does not promote weight loss, but the simple digestion of proteins. This enzyme produces over 1000 tons of it per year worldwide and is used in the manufacture of beer, cosmetics and in the food industry. Papain is also used to soften the meat: in the barbecues we use the juice that flows by cutting the bark of the green papaya to pour it over the meat, making it very tender and juicy.

Preparation Mode –
In addition to medicinal and cosmetic uses and in some applications of the food industry, Papaya is used above all for the consumption of large fruit, which has a similar use to melon. In Thailand, the unripe fruit, cut into julienne strips, serves as the basis for the som tam (Thai: ตํา) known as green papaya salad. In the Philippines, where papaya trees are often grown near homes, the fruit is regularly consumed fresh and used as an ingredient in the preparation of numerous local dishes such as ‘atchara, lumpia and in various chicken and pork recipes.
The papaya fruit is also used as dried fruit in most of the world.