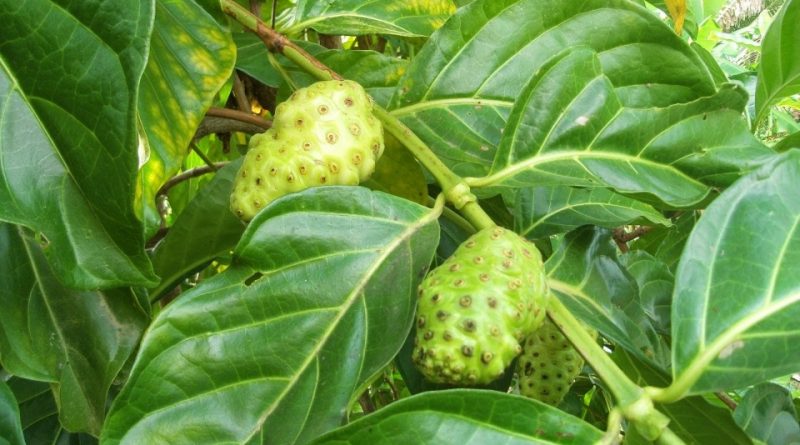 Noni or Indian mulberry (Morinda citrifolia L.) is an arboreal species belonging to the Rubiaceae family.

Systematics –
From the systematic point of view it belongs to the Eukaryota Domain, United Plantae, Magnoliophyta Division, Magnoliopsida Class, Rubiales Order, Rubiaceae Family and therefore to the genus Morinda and to the M. citrifolia species.

Etymology –
The term Morinda derives from the contraction of morus gelso and Indian indica, of India: reference to the common English name ‘Indian mulberry’ attributed to this plant for the similarity of its fruits with those of the mulberry. The specific epithet citrifolia comes from Citrus (Latin name of cedar and lemon, from Greek greek κέδρος kédros cedar and κίτρον kítron lemon) and from folium leaf: therefore with leaves similar to those of a Citrus, for appearance or for aroma.

Geographical Distribution and Habitat –
Morinda citrifolia is a small arboreal species native to the tropical and temperate warm climate zones of Southeast Asia, from India to Taiwan and up to northern Australia.
This plant grows all over the world, in a wide variety of tropical and temperate-warm ecosystems with an average annual temperature between 20 ° C and 35 ° C. The highest cultivation center is in Polynesia and, in particular, in Tahiti. This species has grown wild in other areas where it has been brought by man. 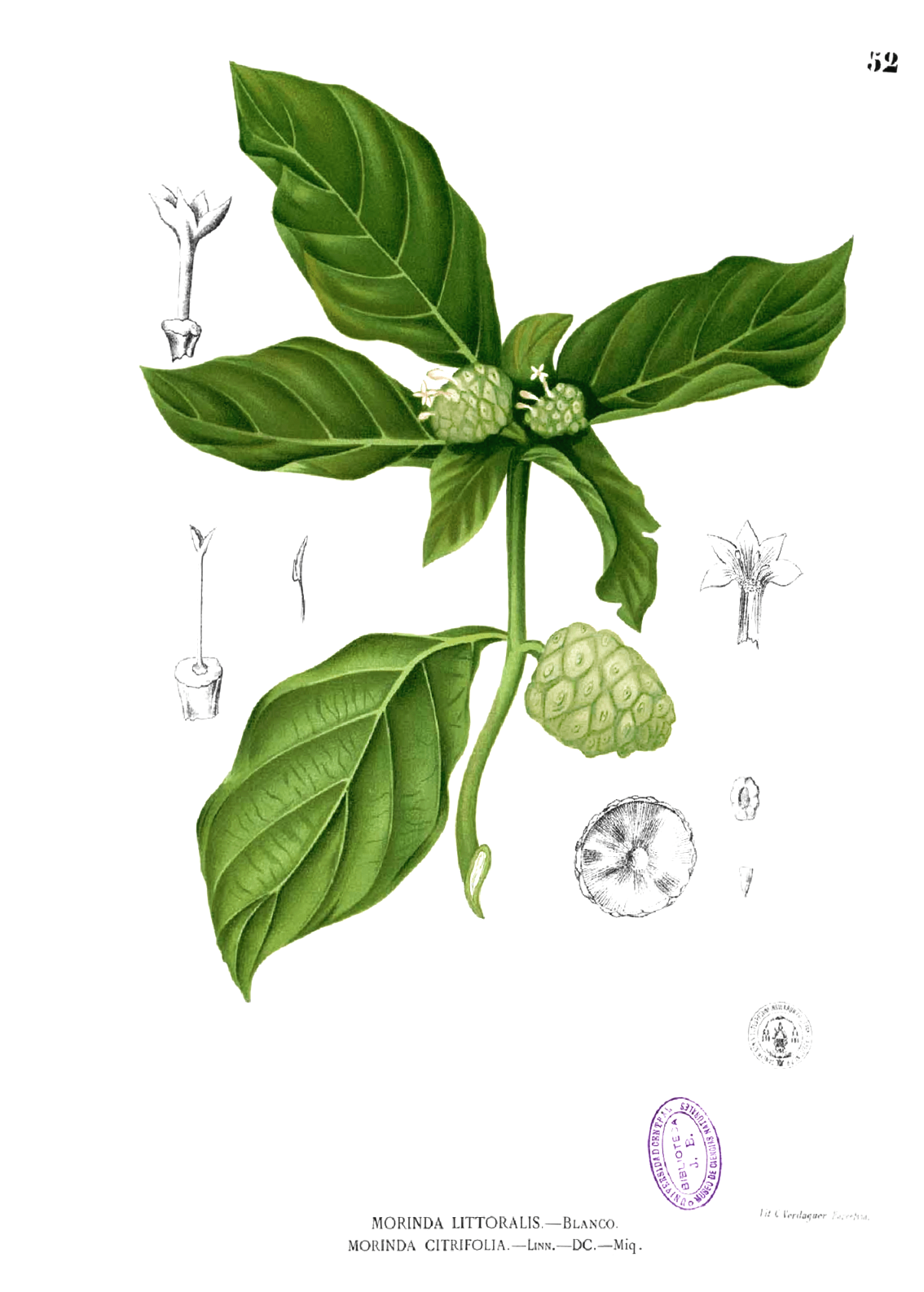 Description –
The Noni is a small evergreen tree, which reaches heights between 3 and 6 m and can reach, exceptionally, up to 10 m. It has elliptical or ovate leaves, large (up to 45 cm).
The flowers are hermaphroditic, with 5 or 6 petals, united in globose inflorescences. The fruit is a sincarpo, which derives from the fusion of many small fruits in a single mass (such as mulberries).
Noni fruits are born on the same branch in later times so you can have ripe fruits, unripe fruits, blooming fruits and buds that will give rise to new fruits.
During the ripening phase, the Noni fruit takes on various shades, from the greenish color that gradually tends to yellow to become whitish yellow and translucent when fully ripe. When it is mature, it is 5–10 cm long, it is tender and exhales an unpleasant smell, which brings to mind the smell of mature cheese.

Cultivation –
Noni can be grown all over the world in a wide variety of tropical and temperate-warm ecosystems, with average annual temperatures between 20 ° C and 35 ° C, and arid or humid climates, with oscillation of atmospheric precipitation between 250 and 4000 mm per year. It also adapts to a wide range of soil conditions, being able to grow on all types of soils: acid, neutral or alkaline, with a good capacity to tolerate even salty soils, which makes it find even in proximity of land near the sea coasts.
It can grow with both sunny and shady exposures.

Uses and Traditions –
Morinda citrifolia, as well as with the names of Noni or Gelso Indian, is also known as nonu, nono, bumbo, lada, munja, and Canary wood.
It is a plant found throughout the tropical belt: in the Caribbean, in Polynesia, in Africa, in India, etc.
Some argue that noni plants would find their ideal habitat in Polynesia, thanks to the volcanic soil of ancient origin with a low content of heavy metals and the total absence of pollution. The collection and transformation of noni fruits in these islands has a centuries-old history and today offers an alternative outlet to the local economy and an employment opportunity for the new generations.
The inhabitants of Polynesia have used the fruits of Noni as a tonic and as a powerful natural remedy for various health problems. Traditionally, native Polynesian healers prepared a juice using ripe fruits that were left to ferment in the sun for long periods.
Even today, modern companies that exploit the characteristics of Noni follow the ancient and traditional method of fermentation.
In Hawaiian and Polynesian cultures the plant was considered sacred and was worshiped as a source of life. The indigenous kahuna healers, who used native herbs and plants, called it “tree of life”, “plant that kills pain” and also “headache tree”. All parts of the noni (bark, roots, leaves, flowers and fruits) have been used in herbal medicine for their medicinal properties.
The properties attributed to noni are similar to those attributed in the traditional Chinese herbal medicine to the congener Morinda officinalis. Today, pharmacological research has recognized the presence of noni active ingredients, including xeronine and proxeronine.
The use of Noni is lost in the night of history and has been used for several centuries for food purposes, although this use has always been discouraged by its unpleasant smell; according to some sources, in the log book of Captain James Cook we refer to the unpleasant smell of cheese that hovered in the islands of Polynesia and that was due to the use of noni, already widely cultivated in those islands. Moreover, the leaves of Noni are also used as a food for pets and silkworms in India. In Puerto Rico the fruits are used as food for pigs.
Another interesting use is for the production of dyes. In fact, the Noni bark contains a red pigment and the roots contain a yellow pigment; these pigments are used, with lower yields than other species of the genus Morinda, for the production of dyes for fabrics and leathers.
Wood is instead used, more marginally, for buildings, firewood, sculptures, etc. and from the seeds an insect repellent oil is obtained.

Preparation Mode –
In 2003 the European Commission authorized the marketing of Noni juice in Europe as a food ingredient even though the Scientific Committee for Food Products, which issued the favorable opinion, noted however that there is no evidence of “particular beneficial effects of the juice of Noni, higher than those of other fruit juices “.
The food uses of Noni in various parts of the world are:
– ripe, raw fruits seasoned with salt (Burma);
– ripe, cooked fruits, mixed with coconut and preserved for sea voyages (Polynesia);
– unripe fruits, cooked with other ingredients to make curry-type sauces;
– use of fruits in times of food shortages (Hawaii, Polynesia);
– very young leaves, cooked and eaten together with rice (Java, Thailand);
– ripe leaves, used to wrap the fish before cooking and eaten together with it after cooking;
– unripe buds (Kiribati).