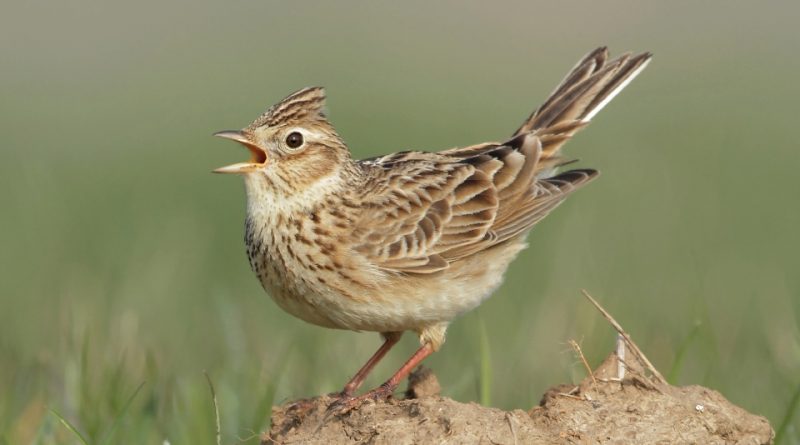 The Skylark (Alauda arvensis Linnaeus, 1758) is a passerine bird belonging to the family Alaudidae.

Geographical Distribution and Habitat –
The Skylark is a widespread bird throughout Europe and Asia. The populations of the north and east migrate in the fall to southern Europe and North Africa and then return at the end of the winter; the southern populations are permanent. The most frequent habitat of larks is represented by more or less cultivated fields, steppes, meadows, pastures and sand dunes, both in the plains and at high altitudes. In Italy it is present throughout the Peninsula, in Sardinia and in Sicily. 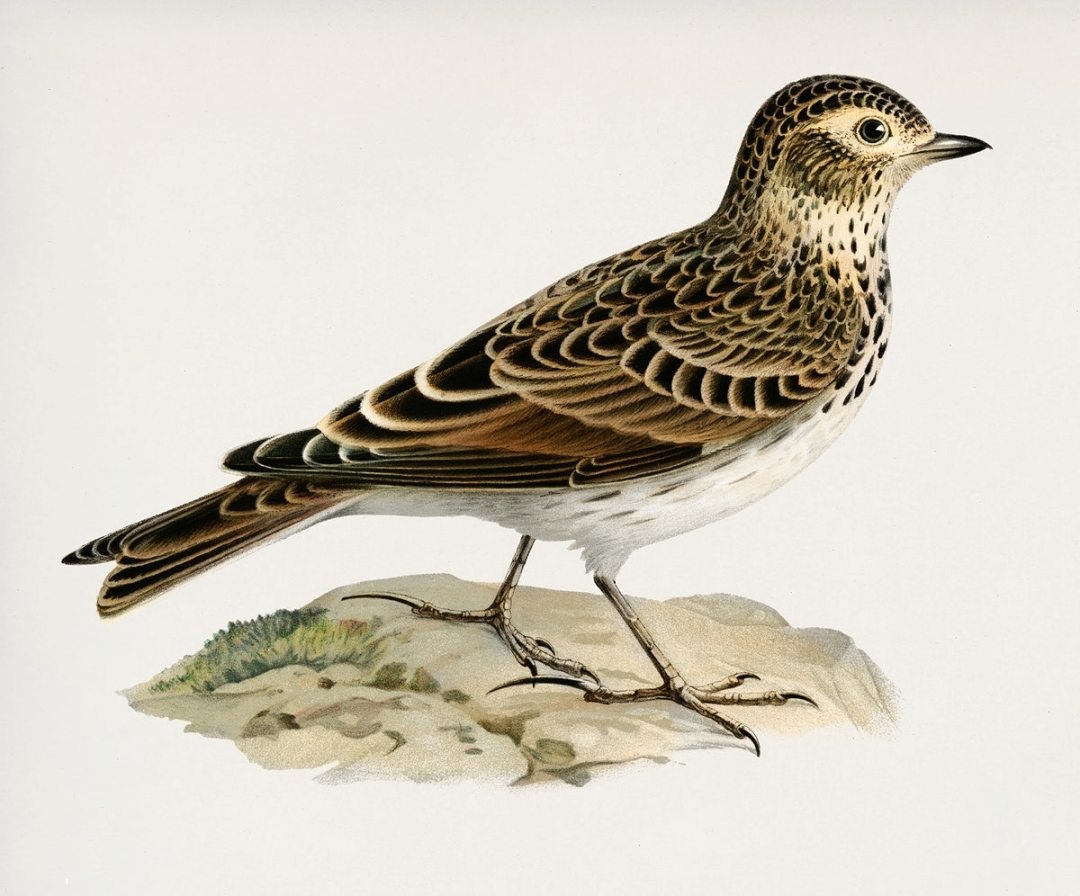 Description –
The Skylark is a bird with minimal sexual dimorphism as male and female have very similar characteristics: the length varies between 16 and 20 centimeters, the weight between 33 and 48 grams and the tail measures on average 7 centimeters. A peculiar characteristic is the tuft of feathers on the nape, which the bird raises only if it perceives a dangerous situation. The feathers are predominantly brown in color, have lighter shades in the lower part and small dark streaks tending to black in the upper part. These same streaks appear slightly wider on the chest, with a cream-colored shade, interspersed with brown spots that fade on the neck and throat. The tail and the back of the wings are bordered in white. The legs are long, as well as the spur (in the back finger) which can reach 3 centimeters.
During the flight it shows a short tail and wide short wings.

Biology –
The Alauda arvensis is a gregarious bird and forms small herds, with a powerful and wavy flight, alternating beats with wing closures. He loves flying a few hundred meters high and then returns to the ground with closed wings, reopening them only a short distance from the ground. It is a terrestrial species that walks and bounces easily, keeping its body in a horizontal position.
The Skylark nests on the ground, from sea level to rural areas. The female is helped by the male to build the nest, usually positioned in depressions of the ground surrounded by low tufts of dry grass. In the period between March and August the females lay 3-6 gray-whitish eggs speckled with brownish-green and speckled with brown which hatch for 11-12 days. The young, which are also fed by the male, are able to fly about 3 weeks after birth. Make 2-3 broods per year. This bird feeds mainly on seeds, vegetables (seeds, sprouts, leaves), enriching the diet with insects during the reproductive period. Insects are also the food of the small in the nest. Occasionally it also feeds on small animals. In spring the larks also feed on the buds of the hemlock because they are particularly rich in nutrients. Remember that the hemlock is a plant toxic to humans but not to the lark.
The behavior of the skylark, which in the morning of the warm season rises vertically in flight to sing and then precipitate quickly and return to the top taking up the song, inspired poets and writers and gave rise to a rich symbolism, making it even a heraldic animal .

Ecological Role –
In Italy the area of ​​diffusion of the Alauda arvensis is quite vast with an estimated population of 1-2 million individuals but which is in decline by 30% in the time span from 2000 to 2010. The species is strongly linked to agricultural environments and therefore sensitive to the rapid transformation that characterizes these environments. For this reason it is a species classified as vulnerable (VU) for criterion A.
This species is in rapid decline in most European countries due to the intensification of agricultural practices, with consequent massive use of pesticides and herbicides, which is one of the main causes of loss of habitats suitable for the species.
The species, during the nesting period, is distributed between Europe, northwest Africa and Asia. In winter, it usually migrates south of its range, except for populations in central and western Europe, which sometimes spend the cold season in the nesting site. In Italy, the Allodola is a nesting, wintering and migratory species with the presence of different populations in our country.
During reproduction it shows a tendentially solitary nature, unlike the winter period and migration, when it moves in flocks, even consistent.