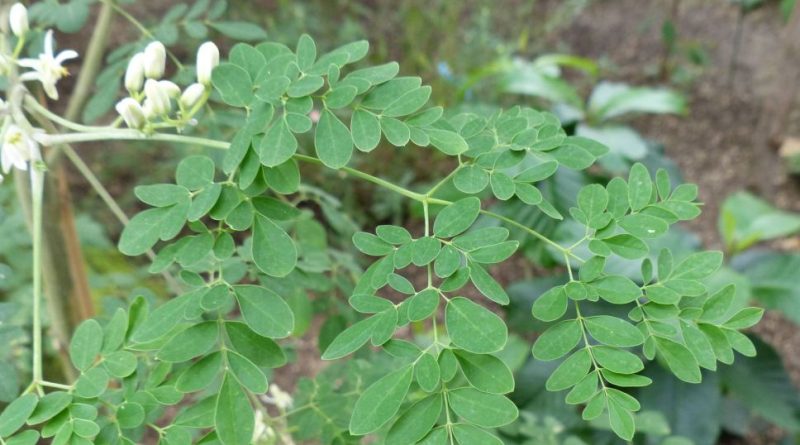 The Horseradish Tree (Moringa oleifera Lam., 1785) is an arboreal species belonging to the Moringaceae family.

Systematics –
From the systematic point of view it belongs to the Eukaryota Domain, Kingdom Plantae, Magnoliophyta Division, Magnoliopsida Class, Capparales Order, Moringaceae Family and therefore to the Genus Moringa and to the M. oleifera Species.
The terms are synonymous: Moringa pterygosperma and Moringa aptera.

Etymology –
The term Moringa derives from the local vernacular name of this plant: moringo in the Malabar, murunga in Sinhalese and murungai in Tamil. The specific oleifera epithet comes from oleum, oil and fero, lead: therefore suitable for producing oil.

Geographical Distribution and Habitat –
Moringa oleifera is a plant native to eastern India, in an area corresponding to the foothills of the Himalayan range of Uttar Pradesh. The species is today quite widespread and cultivated throughout the tropical areas of the world. 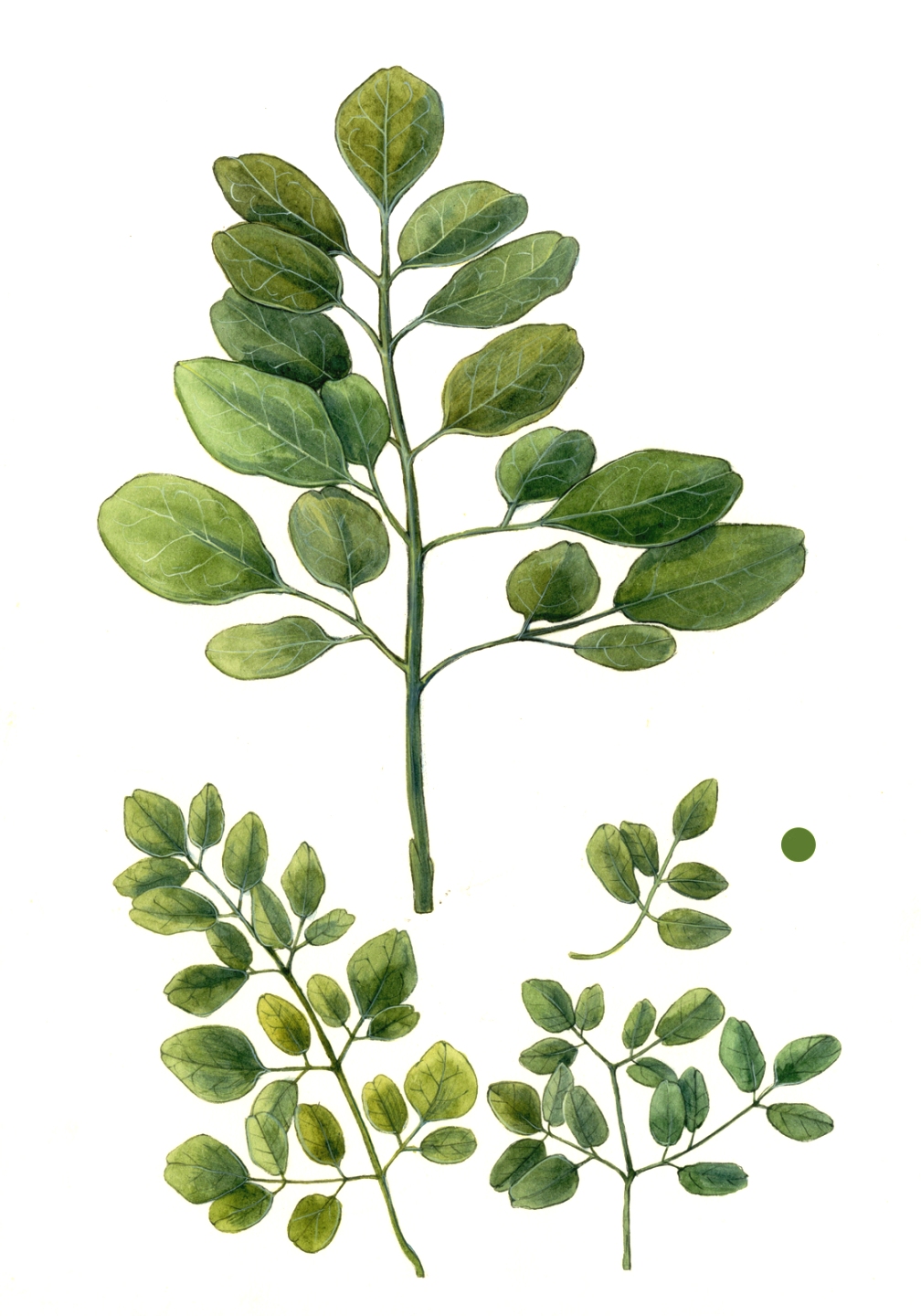 Description –
The Moringa oleifera is a tree that reaches a height varying from 4 to 7 m, although, especially in the areas of origin with deep and fertile soil it can exceed even 10 m in height; the trunk is erect or branched from the base, of soft and spongy consistency; the wood is weak, the branches, thin and intertwined, are pendulous.
The leaves are multi-folded; with each leaf composed of some leaflets which are imparipinnate, oval, opposite and with a terminal leaflet; the leaves are quite robust, with light green backing, glaucous green (pale) on the back.
The roots have a characteristic and strong smell and taste of radish, from which derives its common name.
The flowers, which are small and numerous, are creamy-white in color, with abundant nectar production for the bees but not very showy. Flowering in a tropical environment can take place two or three times a year.
The fruits are large pods with a triangular section, tapered and pointed, with a length of 30-45 cm, green in color and soft if immature; at maturity they take on an ocher and then brown color and a woody consistency. Within these are seeds of brown color, similar to beans, but of a rounded shape and provided with a paper membrane; the seeds number between 16 and 22 per pod and each tree produces 20 to 80 pods.

Cultivation –
For the cultivation of Moringa oleifera it is recalled that the common varieties bear short frosts, especially the adult plants, but the cold of consistent duration severely interferes with growth and fructification, even if the plant survives.
This plant remains in vegetation even in a very dry climate; in its environment, in the event of drought, it is often the only plant that remains green. As a defense against an extremely arid climate, the plant loses the leaves that reform with the return of humidity.
Given its characteristics, it is a plant that can also be cultivated in the Mediterranean environment in the orange cultivation zone and in any case, in more rigid climates than in the tropical areas where the best yields are best to provide vegetable mulching to protect the roots from the cold.
For details of the cultivation technique, see the following sheet.

Uses and Traditions –
The Moringa oleifera, as mentioned, is a species widespread in most of the tropical and equatorial belt of the planet. Today 13 species are known of the genus Moringa, but there are probably others that have not yet been identified.
Known species are: Moringa arborea, Moringa borsiana, Moringa concanencis, Moringa drouhardii, Moringa hildebrandtii, Moringa longituba, Moringa oleifera, Moringa ovalifolia, Moringa peregrina, Moringa pygmaea, Moringa rivae, Moringa stenopelata.
Moringa oleifera is a plant that is eaten practically everything and has a remarkable interest from a nutritional point of view.
The leaves can be eaten and are very rich in proteins, vitamins and mineral salts and have a slightly spicy and pleasant taste even in the raw state. They contain 25 percent in weight of proteins (more than eggs and twice as much as cow’s milk), four times in vitamin A as carrots, almost eight times as vitamin C as oranges, triple as potassium in bananas.
Even the fruits are edible. From the seeds an oil is extracted that represents an important resource for the population: the seeds contain 30 to 50% of oil (olives from 8 to 20%). The oil extracted contains from 65 to 76% of oleic acid which is the same unsaturated fat as olive oil. The oil is sweet and tasty and does not go rancid.
Even the roots are edible and, as mentioned, have a spicy taste like radish. The spicy aroma of the roots is more pronounced than that of the leaves. Even the flowers are edible.
In addition to food uses, Moringa oleifera can be used for other purposes. The oil extracted from the seeds can be used to produce soaps, lubricants and cosmetics with a value equivalent to those produced with olive oil, and therefore quite high. The extracted oils would also be suitable for the preparation of biodiesel fuel, even if it seems an inappropriate use given the quality and potential food uses. From the bark a rubber with many uses is extracted, and tannic substances used for tanning leather. Wood can be used for the paper industry, it also provides a bluish dye.
From the leaves of Moringa oleifera it is possible to prepare, by infusing the leaves in water for several days, a liquid fertilizer.
The most well-known use of this plant is that of water purification through seeds. Moringa seed flour is an excellent purifier for water or other food liquids, having an excellent flocculating power: it fixes and adsorbs the bacterial bodies and other impurities in suspension in liquids by incorporating them in flakes which then fall to the bottom, leaving the more clear and purified liquid. The flocculating power is due to a particularly effective poly electrolyte. This purification property is well known in areas where water is often not pure. In these places the moringa is defined as “the tree of clean water”. For example in the Nile valley it is known as “Shagara al Rauwaq” which literally means “purifying tree”.

Preparation Mode –
Moringa oleifera which, as mentioned, is used practically all from the food point of view. The leaves can be eaten and have a slightly spicy and pleasant taste even in the raw state. They are often prepared in salads, but can be cooked like spinach.
As for the fruits, the most widespread and frequent use is the preparation, by boiling, of immature pods, called “drum maces”, which taste like asparagus.
The seeds are taken boiled or toasted and have the taste of chickpeas. The common use of the roots is that of flavoring (analogous to horseradish), but, due to the presence of an alkaloid (the spirochine) that would interfere with the nerve transmission, excessive use is not recommended.
Even the flowers are edible and usually prepared in salads.