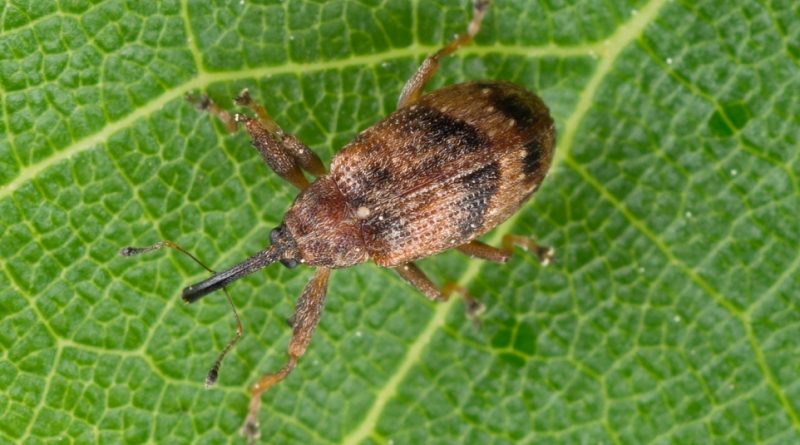 The Weevil Blossom Apple (Anthonomus pomorum L.) is a small beetle from the Curculionidae family.

Geographical Distribution and Habitat –
The Anthonomus pomorum is an insect that completes its biological cycle on apple trees but also pear and cherry.
It is a widespread insect in various parts of the world: from the United States to much of the Palearctic territory, with the exception of the northern part of Scandinavia, and widely distributed in the eastern part of the Ural Mountains, in the Caucasus and in the Far East. Some identifications of this insect in Central Asia and Siberia are in doubt.

Morphology –
The Weevil Blossom Apple can be recognized as the adult is from 4.5 to 5 mm long, with the body having a brown-blackish color, covered with a gray pubescence. On the back of the stilettos it has a light gray V-shaped band. The rostrum is 1/3 long on the body.
The larval forms have a width of 6 – 8 mm, with a more elongated shape than other Curculionid larvae. The head is black in color, has no limbs, and the complexion is yellowish white.
The eggs are oval and milky.

Attitude and biological cycle –
The adults of the Weevil Blossom Apple spend the winter among the dry leaves or in the shelters of the ground. In spring, between April and May, when the temperature has reached stable at least 10 ° C, they resume their activity, mating; after which the fertile females lay an egg for each flower button by drilling it. Each female can lay at most about 100 eggs.
Subsequently they partially cut into the peduncle, to prevent the bud from opening and allow the larva that develops inside to feed on the floral organs and to complete the metamorphosis. In this way, the cut buds hang on the stems or fall to the ground. The development of the pupa lasts more than a week, then the young beetles emerge from the buds through a round hole. The young beetles feed on the parenchyma of the upper side; during this phase their harmfulness is negligible. At this point the adults enter winter diapause at the end of the summer and find refuge under the bark of the trees.

Ecological Role –
The Anthonomus pomorum is a small beetle that, in the popular apple, pear or cherry orchards, prefer the shady areas of the foliage, in the northern side, with dense vegetations. In these orchards, if they are on the edge of forest areas, these beetles concentrate in the edges of tree crops; moreover these insects perceive the plants with more abundant flowering and that lasts for longer time; moreover they can find their host trees using pheromones or chemical signals derived from plants. These beetles can be kept at bay by their predators, in various parts of the world, and by the presence of other natural antagonists, such as eg. insectivorous birds (such as the nuthatch or woodpecker), Carabidae and Ichneumonidae. In some cases, of perfect agroecological balance, over 90% of the larvae are eliminated by the various predators and antagonists.
The harmfulness, and the relative damage of these insects, is more evident when the abundance of parasites for a tree is about 200-300 specimens and damages about 70% of the buds. The main risk factors for attacking the apple’s Antonomo are when there has already been a high infestation the previous year and when the orchards are located near wooded areas.
The damage is caused, as seen, by the attack on the reproductive organs of the flowers that do not fade but take the form of a “clove”. The damage is very limited in the years in which the flowering is abundant, and vice versa. The presence of this insect, in mild form, on the other hand, provides a naturally beneficial thinning (the apple tree blooms abundantly 1 year on 2).
To reduce the presence of this small beetle, a series of measures can be adopted, both of an agro-geological and an agronomic nature. The first ones must be adopted, in any case, during the orchard design phase. Excessive specialization, proximity to woods or natural areas, cultivation in areas with few hours of sunshine, proximity to agricultural areas excessively treated with insecticides and herbicides are one of the causes of greatest risk.
The measures of an agronomic nature are instead linked to the thinning of the foliage, to the elimination or at least reduction of the fertilization of nitric nitrogen, to the combustion of vegetable waste, especially those, inoculated with eggs.
The use of insecticides due to the reduction of these populations should be done shortly before the spring recovery, adjusting even with the minimum stable temperature of 10 ° C, but, in this case, there is the risk of compromising even more the entire ecological balance of the area, as it is going to destroy especially useful insects and natural predators.