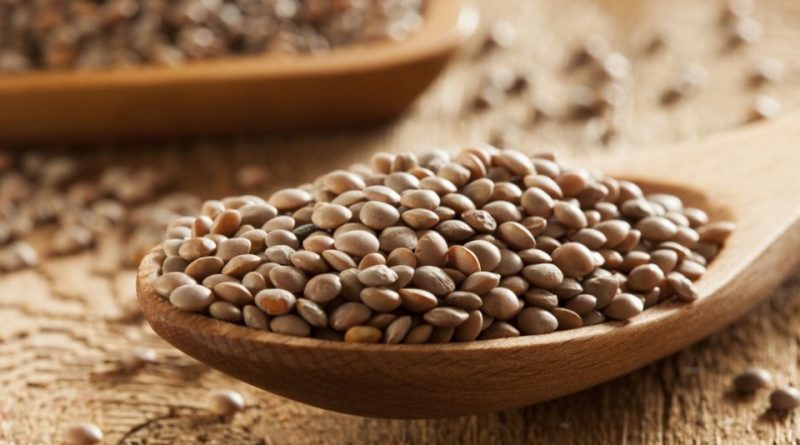 The Ustica lentil is a traditional Sicilian food product, as well as a Slow Food Presidium, grown on the island of Ustica north of Palermo.

Origins and History –
The Ustica lentil is a production that has been cultivated for more than two centuries on the island of Ustica.
The Ustica lentil is a local ecotype, which means that it has developed unique characteristics by adapting to the cultivation environment. It is produced exclusively on the island of Ustica and is the result of a selection made by farmers over the centuries and an adaptation to specific environmental conditions. Thanks to the climate and the volcanic soils of the island it is determined the development of the characteristics of the product such as, ease of cooking, intense taste and aroma.
To understand the origin of the cultivation of lentils in Ustica it is necessary to know that at the end of 1700 the island, until then a refuge for pirates, had stable inhabitants from the nearby Aeolian islands to whom the land to be cultivated was entrusted. Throughout the island the land covered by spontaneous vegetation was cleaned up and became cultivable.
The most widely used crop system was the cereal crop in which, following the agronomic principles of rotation, wheat and vegetable plants followed wheat. Agriculture became so flourishing that many products were exported until the 1960s. The motovelieri arrived with the buyers and distributed loads of quintals of melons and legumes, among which the lentil that was in great demand especially on the Neapolitan market.
Until the second post-war period agriculture represented the base of the economy and of the island society and fishing, although practiced, never had great importance. The confined ones also ate many lentils, which in Ustica were present in large numbers during fascism. Antonio Gramsci confined to Ustica in 1926 mentions them in letters from confinement also because they represented a very frequent dish at the table of the confined.
Subsequently the emigration towards the North, which struck the whole of the South, and the advent of tourism led to a slow but progressive abandonment of the countryside. Island agriculture was no longer enough to meet the needs of the population that preferred to convert the economy back to safer and less strenuous earnings, tourism today represents the source of greater income for the island, which has high potential especially for the beauty of its sea and its depths.
Today there is an association of 6 producers that packages the product with a single image and, by signing a set of rules together with Slow Food, produces exclusively organic. The threshing method was mechanized thanks to the help of the Sicilian Region, which initially provided the producers with a fixed-position threshing and now a combine that easily and without delay, the long and laborious work in the farmyard, method used until 2000.
Production has increased considerably and has gone from around 20 quintals in 2000 to around 200 this year. Many abandoned lands have been put back into cultivation, partially recovering the typical rural landscape made up of small plots and dry-stone walls. Besides being an important economic outlet in the island reality, the Ustica lentil has become the symbol of a return to an almost forgotten agriculture, of the recovery of the landscape and the rediscovery of the identity of an island and its traditions.

Geographic area –
The Ustica lentil is a production that has been cultivated for more than two centuries on the island of Ustica. Ustica is an island of volcanic origin situated 36 miles north of Palermo and extended for only 800 hectares.

Raw material –
The lentil of Ustica belongs to the group of microsperma lentils, with small seeds; In fact, 1000 seeds weigh about 20 grams and each has a diameter of around 4 millimeters. It is produced exclusively in organic and therefore without the use of chemical substances or herbicides.

Description –
The Ustica lentil is characterized by a coloring of the seeds that is predominantly dark brown and often has some gray tones and various types of streaks, while the inner color is orange. The variability in the appearance of the seeds is an indication of an internal biodiversity typical of ecotypes, which is not found in commercial varieties that instead have seeds all of the same size and color.

Production Mode –
The Ustica lentil is the smallest lentil in Italy, cultivated on fertile lava soils with a completely manual technique. The lentil is an annual plant whose cycle, in Ustica, takes place between January and June. The preparation work in the fields actually begins at the end of the summer, because before sowing, which takes place from mid-December to mid-January, the soil must be worked several times both to favor the storage of water during the autumn rains and they follow the summer drought, both to obtain a soil structure that can accommodate the seed and subsequently the development of the lentil plant. The plots are very small, on average around 3,000 square meters, they are surrounded by dry-stone walls and are often scoured by salt air, so the use of agricultural machines, when possible, is very complicated. The post-sowing and more laborious phase is manual weeding. It is made in spring with a hoe, passing all the rows meticulously. This operation takes place several times depending on the incidence of weeds. It is also necessary to guarantee the biological method and therefore not to use chemical substances or herbicides. In April the flowering begins and at the beginning of May the pods begin to develop, each of which contains one or two lentils which then mature towards the end of the month. Between the end of May and the beginning of June the dry plant and only at that point the harvest takes place, which includes a phase of grubbing the plant and a threshing phase to separate the lentils from the rest of the plant.
Grubbing is almost always done by hand due to the presence of stones in the ground and given the size of the plants (about 15-20 cm) that do not allow the use of mechanical mowers; this operation takes place at dawn when the plants are still wet to prevent the pods, if too dry, from opening and the lentils fall on the ground. The threshing is done using a combine that, given the small size of the plants and the considerable presence of stones, cannot harvest but only thresh the lentils already harvested on the various plots. The lentils before being packaged are selected and subjected to a cold treatment to avoid the development of pests during storage.

Gastronomic Use –
Poor food par excellence, Ustica lentils are a fundamental ingredient of local cuisine. The two classic recipes are the soup, enriched with vegetables and flavored with basil or wild fennel, and pasta and lentils, prepared with broken spaghetti.
The Ustica lentil has a wide versatility in gastronomic uses even in particular combinations, from sausages to seafood. Even one of the most prestigious magazines of Italian gastronomy, Il gambero rosso, has recently dealt with the Ustica lentil, including it among the ten best Italian lentils and subjecting it to a panel test following which the following comment was expressed: “Piccolissima, dark brown in color, once cooked it is rather uniform and compact, with little presence of the skin separated from the seed. On the nose and in the mouth the aromatic sensations of the legume are pleasant and true, delicate but quite persistent.
One of the most traditional dishes, prepared exclusively with the Lentil of Ustica is the soup.
For the traditional Usticese soup, various types of vegetables are added, in quantities not excessive and such as to cover the taste of the lentil. Vegetables vary depending on the season and the taste of the person who eats it. Surely they cannot miss onion, courgette and tomato. In the summer version we will use the courgette with its sprouts, called tenerumi and basil at the end of cooking. In the winter version, the courgette can be replaced by the red pumpkin and the tenerume by the chard. Potatoes can be added to taste. Further versions include the presence of celery, cauliflower or broccoli. To flavor, wild fennel or rosemary leaves and very often garlic are used. Chili can also be added as desired.
The lentils should be cooked in cold water brought slowly to a boil, the water should be dosed in order to obtain the right consistency of the soup. To make cooking easier, do not put salt and mix until the lentils are completely soft. The vegetables can be sautéed in extra virgin olive oil before being added or they can be put raw at the same time as lentils. A little extra virgin olive oil is always added to the dish. The soup can be eaten alone or accompanied by toasted bread to taste rubbed with raw garlic.
For a complete and balanced meal with carbohydrates and proteins, you can add pasta, traditionally broken spaghetti.