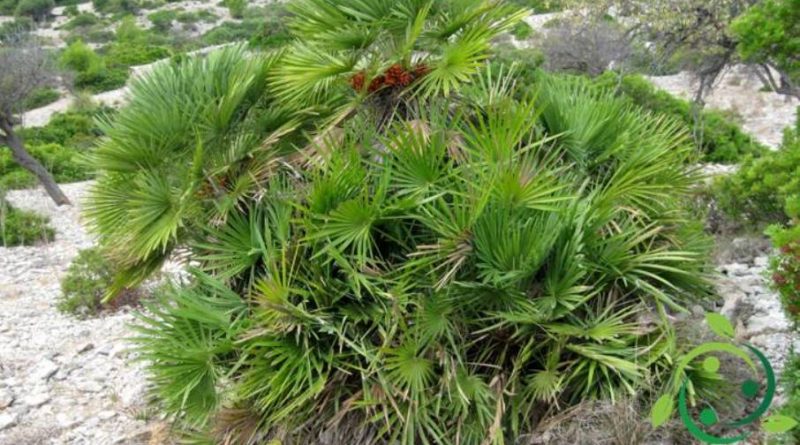 How to cultivate the dwarf palm

The dwarf palm (Chamaerops humilis L., 1753), also known as the Saint Peter’s palm, is a plant of the Arecaceae family, the only species of the genus Chamaerops and a typical plant of the Mediterranean maquis. It is a plant widely used as an ornamental plant, in private gardens and public parks, due to its natural tendency to form large, very decorative bushes. It is also appreciated for combating erosion, the desertification of soils and its ability to regenerate itself even after fires.In this sheet we will see how to cultivate the dwarf palm following the most appropriate techniques.
The dwarf palm is a thermophilic species with developed plant tissues that allow it to withstand periods of prolonged drought and high temperatures, also thanks to a sturdy and collated root system that extends to several meters deep.
The dwarf palm, over the years, tends to assume a bushy growth habit thanks to the development and growth of the different basal suckers that form at its feet.
The leaves are leathery and deep green in color, with a lance-shaped shape with a page crossed by evident parallel ribs that gradually segment, fray, taking on the typical fan shape with evident filamentous residues on the edges of the leaves that among other things fork towards the tips. The flowers are gathered in showy and pendulous panicle inflorescences visible at the base of the leaves. Each inflorescence is formed by small yellow-greenish, unisexual or hermaphroditic flowers, generally on distinct plants. The fruits are ovoid and fleshy berries of golden yellow color when fully ripe. The seed, one per berry is woody.
The dwarf palm, for its cultivation, prefers bright and sunny places with optimal temperatures between 22 and 30 ° C. The most suitable soils are the loose ones, typical of the red earths of the sunny areas of the Mediterranean coasts, to which, in order to have more luxuriant growth, organic matter must be added before planting.
As for irrigation, even if the dwarf palm resists drought, if you want a faster and more luxuriant growth, you need to irrigate it immediately after the plant and then, with shifts of up to fifteen days during the summer period.
If the dwarf palm is grown in pots it should be watered regularly from March to October only when the soil is completely dry even in winter, always and only if the substrate is dry.
If the dwarf palm is grown in pots it should be fertilized once a month, from the beginning of spring to late summer by administering at its feet liquid fertilizer or, every 2 months, slow-release granular rich in macroelements such as nitrogen (N ), phosphorus (P) and potassium (K) and with a good percentage of microelements such as iron (Fe), manganese (Mn), copper (Cu), zinc (Zn), boron (B) and magnesium (Mg).
If grown in the ground it is good to add mature manure or humified organic substance to the end of the winter by mixing it with the first layers of soil. In the middle of the earth, absolutely avoid the use of nitrogen fertilizers so as not to weaken the plant’s resistance to pests such as aphids and cochineal and above all from the white fly.

For the propagation of the dwarf palm it is possible to operate either starting from seed or, even better, by agamic means by dividing the tufts or suckers that form at the base of the plant.
In the multiplication by seed, little advised for the long growth times, it is necessary to find fresh seeds, freshly picked from the plant, which must be put immediately to macerate in water for at least 7 days, time required to the external envelope that protects it from reaching a soft consistency.
For the sowing operation then the seeds are stratified on the surface of a substrate composed of sand and peat in equal parts. The container is wrapped in a plastic bag and placed in a shady place at a constant temperature of 30 ° C. The soil should always be kept moist until the shoots appear, which occurs in about 2 months.
Once the new plants are obtained, they must be transferred to individual pots and reared in them for at least 2 years before they can be definitively planted.
In the division operated instead by cespi it is operated in the spring period, between April and May, by placing the shoots that form at the base of the plant to root in a jar containing soil, peat and sand in equal parts. For this operation it is recommended to choose the sprouts that have at least 2-3 leaves.
The jars, on which the suckers have been placed, should be kept in a protected place with a minimum temperature that should not fall below 10 ° C and for the first 2 – 3 months, moreover the substrate should always be kept slightly moist. The young palms thus obtained must be grown in pots before planting them outdoors.
For plants grown in pots, repotting should be carried out periodically. This operation must be done when the roots have occupied all the available space and come out of the drainage holes of the draining water. When the pot is large, just remove old (2-5 cm) soil and replace it with fresh soil.
The dwarf palm, like all other palms, does not require pruning but simply proceeds to remove the dried leaves, cutting them with well sharpened and disinfected shears from the point where they start from the stem. In the leaves that have the dry apical part, only the tips are eliminated so as not to compromise the aesthetics of the plant.
The dwarf palm, although it is a plant very resistant to parasitic attacks, can be subject to whitefly, especially if the insolation is not optimal or if you have used nitric nitrogen fertilizers. It is also resistant to fungal diseases such as powdery mildew (white powder) and rust.
For the cultivation of the dwarf palm, outdoors, it is advisable to mulch the base of the plant with coarse gravel to limit the loss of water and to protect it from the cold of winter.
As for its alternative uses, it is recalled that the most tender apical buds of the dwarf palm are edible. In times of famine they were consumed boiled as vegetables, instead of potatoes and even as flour for making cakes.
Furthermore the fruits are rich in tannins and liposterol compounds that can be used as astringents, to support the functionality of the prostate and urinary tract.
The leaves, due to their fibrous consistency, were once used for the manufacture of baskets, brooms, hats, fans, mats, ropes, etc.