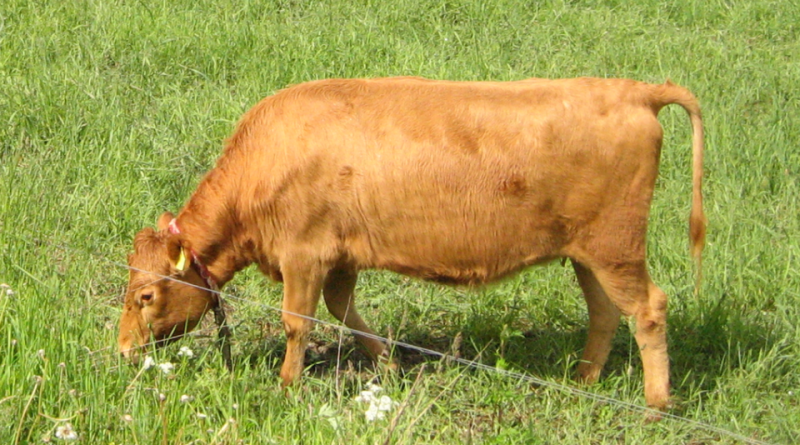 The Western Finncattle or Länsisuomenkarja in Finnish is a Bos taurus bovine breed Linnaeus, 1758) originally from Finland with a prevalent aptitude for milk production.

Geographical and area distribution –
The Western Finncattle (Länsisuomenkarja) is the prevailing breed present in Finland, with about 4,000 head of cattle, but with decreasing figures. This phenomenon is due in part to the increase in the numbers of two very similar breeds that are: Eastern and Northern Finncattle, as the subsidies for breeding these two breeds are higher.
All Finncattle breeds are small, all naturally without horns, although they differ in appearance and production levels. The Western Finncattle breed is the largest of the three breeds, and cows produce about 6435 liters of milk per lactation (by comparison, the Holstein breed produces an average of 8630 liters).
The geographical area of ​​the Western Finncattle is formed by the current Finnish borders, formed in 1947. Before the war this breed was mainly in the western part of the country.

Origins and History –
The Western Finncattle is a breed originating from Finland and, as mentioned, to date, is the dominant breed in Finland; it seems that also breeders of other breeds have entered in its recent history. The origins of the Western Finncattle reside in the ancient cattle races that were brought to Finland, it is presumed from the Baltic area, in a period that can be dated between about 4300 and 5200 years ago . The herds of cattle are believed to have been well established during the Bronze Age 2500 – 3700 years ago. The Western Finncattles differ from other European cattle both from a genetic point of view and from the aspect, since the animals have adapted to the living conditions of the place and to the breeding choices made by man.
In the mid-nineteenth century the Finncattle group, represented not only by the Western Finncattle, but also by the Eastern and Northern Finncattle, their numbers decreased significantly, reaching the minimum in the eighties of the twentieth century. Western Finncattles were recorded in herd books from 1906, but the three races were combined in 1947, and the Western breed was selected as the official Finncattle breed standard. However, the three types remain distinct and today are considered separate races, despite sharing a genealogical register.

Morphology –
The Western Finncattle is a breed that is characterized by its mantle of formentino red, golden or brown-beige, with a belly sometimes spotted with white in the region of the breast. It is also a genetically acorned (polled head) breed with a pink musk color.
The Western Finncattle, like the other two Finnish breeds, is small (with an average weight of 527 kg for adult animals) although, among them, they differ in appearance and production levels.

Production aptitude –
The Western Finncattle breed is mainly bred for milk production although some producers also use it for meat production.
The cows produce, as mentioned, about 6435 liters of milk per lactation. Western Finncattle cattle have adapted to the Finnish climate better than other cattle breeds, and tend to live long and be very fertile. In milk the lipid content, with particular reference to that of good fatty acids, is higher than in other Finnish breeds, moreover Finncattle’s milk proteins have a lot of type B Kappa Casein, which is missing from other milks.
Finncattle milk also has better coagulation properties, which is advantageous for the production of cheese, vili (a product similar to yogurt but with sour milk) and yogurt. Finncattle milk is often sold raw directly from farms for further consumption or processing, however production is reduced and distribution channels are limited.
In addition to its production capacity, for which the Western Finncattle breed is bred, these cattle are used for research and reproduction purposes, in order to preserve this native breed and biodiversity. The active conservation of native Finnish animal breeds began in the 1970s and in 1984 the Minister of Agriculture and Forest Sciences established a working group for a gene bank to save the Finnish races, including therefore the Western Finncattle. In addition to individual farms, Finncattle flocks were raised on farms connected to prisons and agricultural institutes. Today this breed risks extinction due to its limited number, a lack of knowledge on the part of consumers and rural policies that support other large-scale productions.