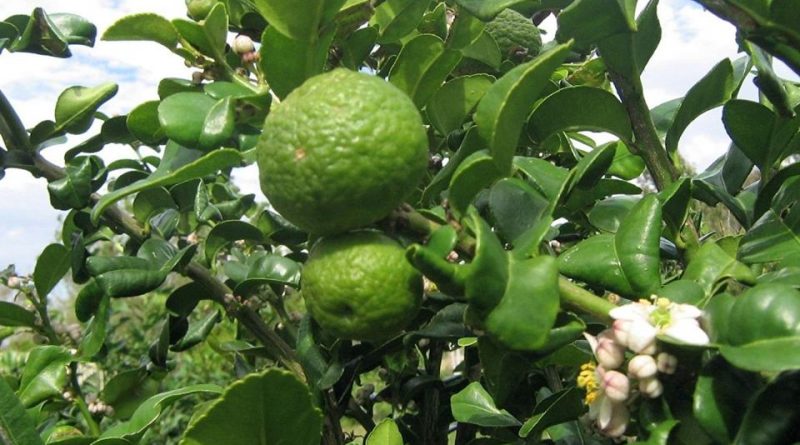 The kaffir lime or Papeda of Mauritius (Citrus hystrix DC.) Is a small tree belonging to the Rutaceae family.

Etymology –
The term Citrus comes from the Latin name of cedar and lemon, of Greek origin, κέδρος kédros cedar and κίτρον kítron, lemon. The specific epithet hystrix is ​​derived from hystrix porcupine, porcupine: due to the spiny appearance similar to a porcupine.

Geographical Distribution and Habitat –
The Papeda of Mauritius or Combava has origins originating in India and South-East Asia and is still cultivated in Thailand, Vietnam, Laos and Cambodia. It is also widespread in Indonesia and Malaysia, the islands of Réunion and Madagascar.
This small tree was introduced in 1808 in the city of Nimes, near Montpellie, by a ship captain. In addition, a Citrus hystrix plant was purchased by Professor Gaetano Savi, for the Garden of Pisa, around 1825 from France. 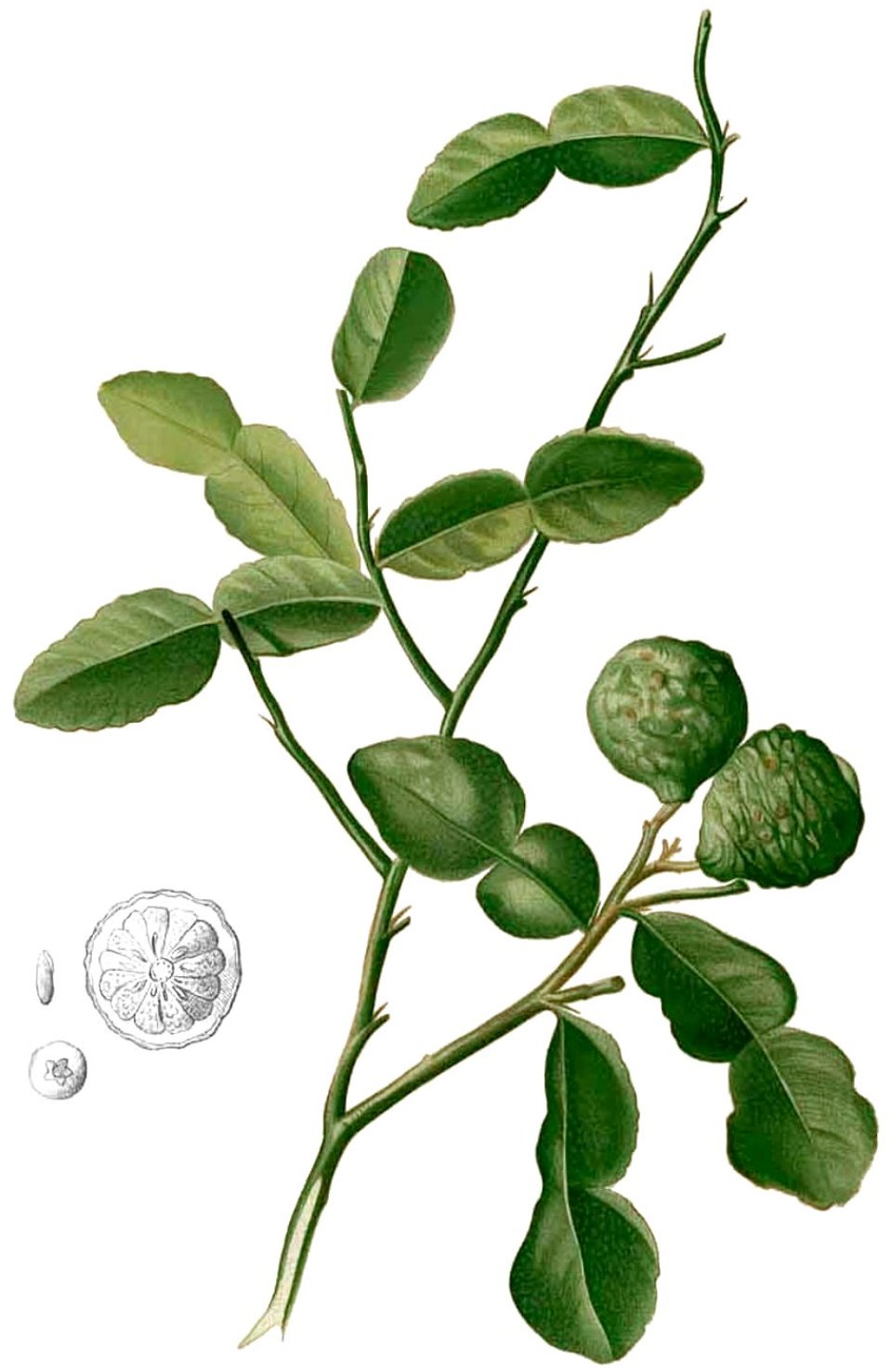 Description –
The Citrus hystrix is ​​a small, very spiny tree with irregular crown and short spines, with thick and luxuriant foliage. Unlike the other citrus, it has leaves up to 12 cm long, pungent, with a central narrowing, dark green, very particular, ovate-oblong in shape. The flowers are small, white and fragrant. The fruit measures no more than 3 cm and can be round or oval, sometimes stretched like a fig to the hairline, greenish-yellow in color and with a corrugated skin. The skin is strongly rippled and irregularly convex, with a bright green color to dark green. The taste is extremely sour, bitter and therefore the fruit cannot be eaten fresh.

Cultivation –
For the cultivation of the Combava, remember that, also due to its origins, where it evolved, it is a citrus fruit that prefers to stay in places exposed to the sun, at least partially; furthermore, if repaired, it can withstand cold even up to -6, -7 ° C and this allows it to grow even in northern Italy. throughout the summer it is possible to have fresh fruit for most of the year between March and October.
For fertilizing we recommend an organic fertilizer, which in addition to being balanced improves the soil structure where it is grown. The optimal period to make the fertilizer is the end of winter by mixing it superficially in the soil.
The fruit ripens when it begins to change color and take on a more yellow shade: at that point, unlike the lemons that remain attached to the plant, the Combavas fall to the ground and that is when they can also be used in the kitchen.

Uses and Traditions –
Citrus hystrix is ​​a citrus fruit whose origin has not yet been determined with certainty. According to some authors, it is considered a hybrid between cedar and lime, others are of the opinion that it is a spontaneous mutation of the lime.
This plant, if in a part of Europe, including Italy, is known as combava, the name kaffir lime is used in the Anglo-Saxon world. The term kaffir is problematic, however, because in African countries, and not only that have undergone European colonization, it has taken on an offensive and racist meaning similar to negro and it is preferred to use the translation of the sound of the word used to describe the fruit in the language Thai: makrut or more simply the term thai lime.
The juice, the leaves and in some cases the peel of the Combava is rich in essential oil; these fruits are used, with excellent results, in the cuisine of Thailand, Vietnam, Laos, Cambodia, but also Madagascar and Indonesia. In Italy it is not easy to find them: the leaves can be bought dried or frozen, in both cases they do not lose their intense and penetrating flavor, in ethnic or specialized shops; while fresh is found almost exclusively online, but to overcome this problem you can grow it on the balcony. In order to have leaves and fruits always available, it is in fact possible to keep it in a vase, cut into a sapling.
Although all these uses are reserved for Creole cuisine and the regions where it is cultivated (Laos, Thailand, Bali, islands of Réunion, Madagascar), in recent times even Western cuisine has tried to appropriate it.
Like the other citrus fruits, the Combava is also used on an industrial level. Good scents are produced, since the skin contains many terpenes, the limonene and above all the citronellol which has a strong rose fragrance.
It is recalled that in Indonesia the juice and thin dried slices of Combava are used as a medicine. It is sold under the name of jeruk obat which literally means medicinal fruit.

Preparation Mode –
The extreme acidity of the fruits of the Combava does not allow it to be ingested as a fresh fruit but does not limit its use in the kitchen. The peel is regularly used as a spicy ingredient in sauces and condiments, and thin slices of Combava can accompany fish dishes. Particularly appreciated are the leaves that form the basis of many salads. After appropriate processing, the juice is used in the preparation of some rum-based liqueurs that are produced on Madagascar and on the island of Réunion. However its main use is in the form of powder, obtained by drying the peel.