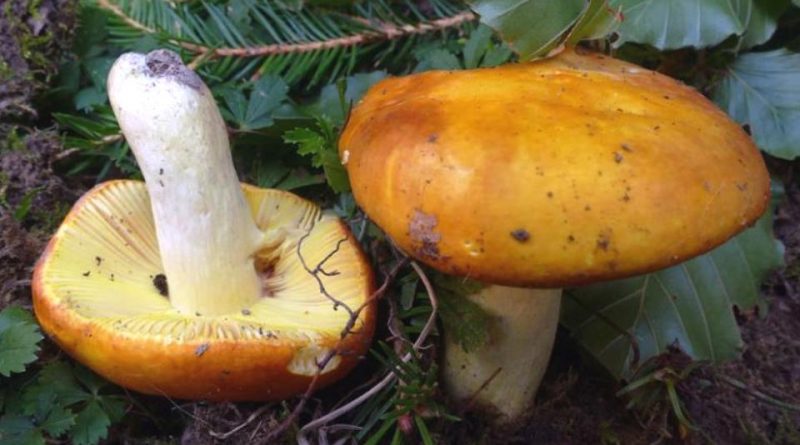 The gilded brittlegill (Russula aurea Pers., 1796) is a basidiomycete fungus of the Russulaceae family.

Systematics –
From the systematic point of view it belongs to the Eukaryota Domain, Fungi Kingdom, Phylum Basidiomycota, Class Basidiomycetes, Russulales Order, Russulaceae Family and therefore to the Genus Russula and to the R. aurea Species.
They are synonyms and obsolete binomials: Agaricus auratus (With.), And Russula aurata (With.) Fr.

Etymology –
The term Russula is the diminutive of rússa, red: reddish. The sepcific golden epithet provieneda golden aureus: golden, gold, due to the color of its hat.

Geographical Distribution and Habitat –
The gilded brittlegill is a fungus that grows in broad-leaved forests, occasionally also under conifers, especially in the more temperate areas. It develops in the period from late spring to late summer. 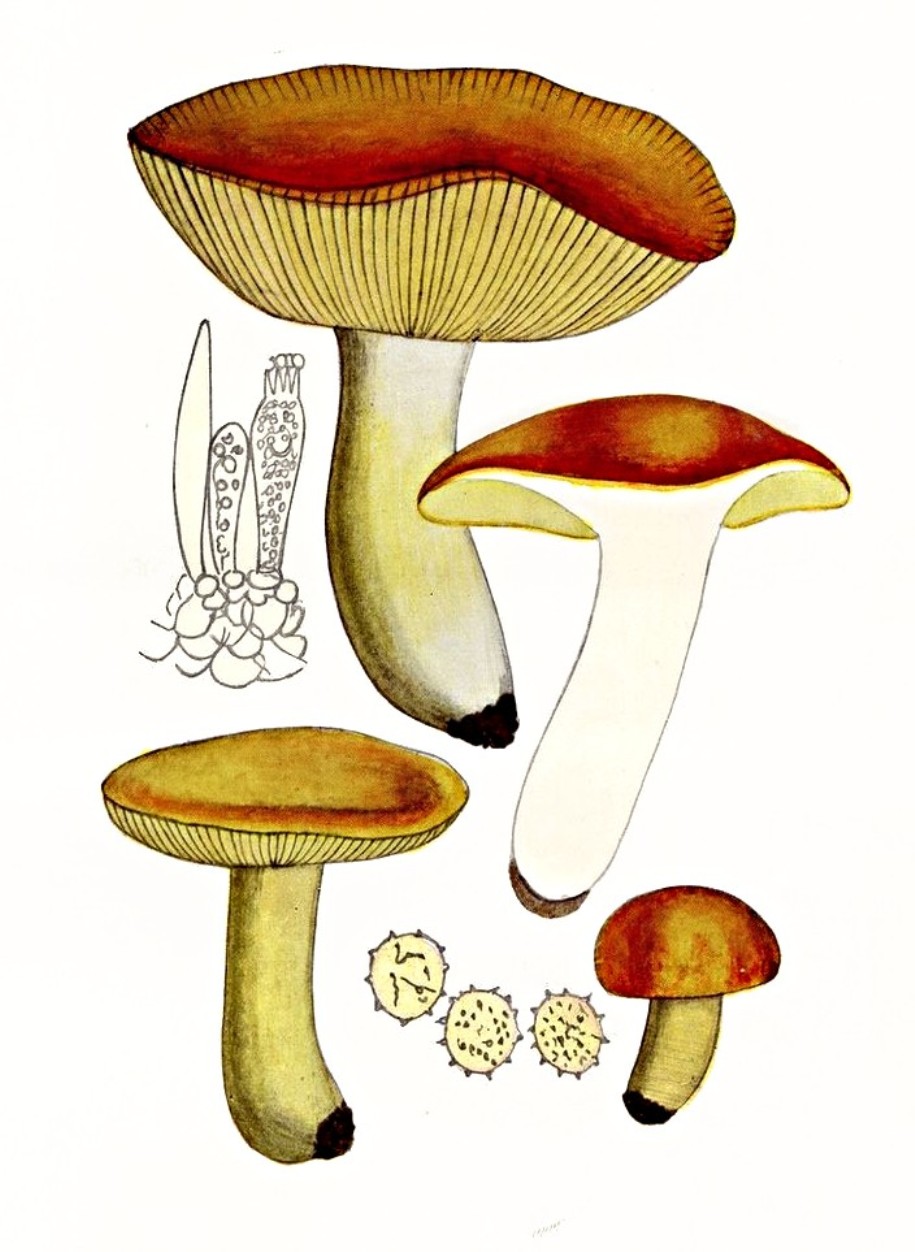 Recognition –
It is recognized by the hat of the size of 5-12 cm in diameter, quite firm, first hemispherical, then convex and finally flat with a slight central depression. The cuticle is separable over half, dry, rather opaque, with a red color with more or less extensive yellow-gold spots. The margin is rounded and in adult specimens it is furrowed.
The gills are dense, fragile, cream-colored and then golden, about 9 mm wide, adorned or free at the stem, from the beginning tinged with citrine yellow on the wire, then yellow-cream and finally ocher.
The stem is 5-8 x 2-3 cm, with cylindrical conformation, rounded base, flared at the apex, attenuated at the base, of fleshy consistency, first full then stuffed, white in color, almost always shaded at least in part yellow lemon with brown spots.
The flesh is whitish, firm, yellow under the cap cuticle, very fragile, with no noticeable odor and sweet taste.
Under the microscope, spores of 7.5-9 x 6.5-7.5 µm are noted, sub-ovoid, warty, reticulated, mass yellow.
The basidia are 50-13 µm and the cystidia are fusiform, of 60-80 x 9-12 µm.

Cultivation –
Russula aurea is not a cultivated mushroom.

Uses and Traditions –
This Russula, also known as gilded brittlegill, both for its bright yellow and red colors, with various shades, is easily recognizable in the field, however it often appears without the characteristic yellow or completely yellow shades and in this case the only valid aid can be obtained from the pleasant taste of the meat. However, even if it is one of the most recognizable russul at a glance by the collectors, from which it is also considered among the most valuable of the genus and of excellent edibility , confusion with Amanita caesarea is not infrequent on the part of the neophytes: the presence of residual veils on the hat and of a volva well evident at the base of the stem facilitate the gatherer in the determination.
Possible confusions can also be made with:
– Russula melliolens which has a bright red or purple-red cap or even a rosy load, yellowing or ocher-stained gills when ripe, whitish stem, rarely also with pinkish shades, white meat with irregular brownish nuances and unmistakable smell of honey found in adult specimens, edible, grows under broad-leaved trees;
– Russula vinosa (Russula obscura) which has a dark red, purplish-red or wine red cap, absence of yellowish tones and has the flesh and the sharpness of the strongly graying lamellae, it grows on damp ground under the conifers;
– Russua lundellii, which is recognized for its exclusive growth under birch and for its acrid taste;
– Russula maculata, for growth under Quercus, for very acrid meat and a fruity-honeyed smell.
Russula aurea is a mushroom with excellent edibility and much sought after.

Preparation Mode –
The Russula aurea, due to its flavor and characteristics, can be enjoyed raw in vegetable salads and excellent sautéed with garlic, extra virgin olive oil and parsley, with the hats stuffed with a mixture made with minced meat or cheese, many aromas and chopped stems, since nothing is thrown away of this mushroom. It can be prepared with excellent linguine mare e monti. It can also be prepared as cutlets; after removing the stalk, sauté to flavor and then pass in the breadcrumbs and fry in the oven. Or bread with the egg and fry in plenty of oil. It can be cooked and then blended and reduced to a cream to be placed on slices of toasted bread and with melted cheese.