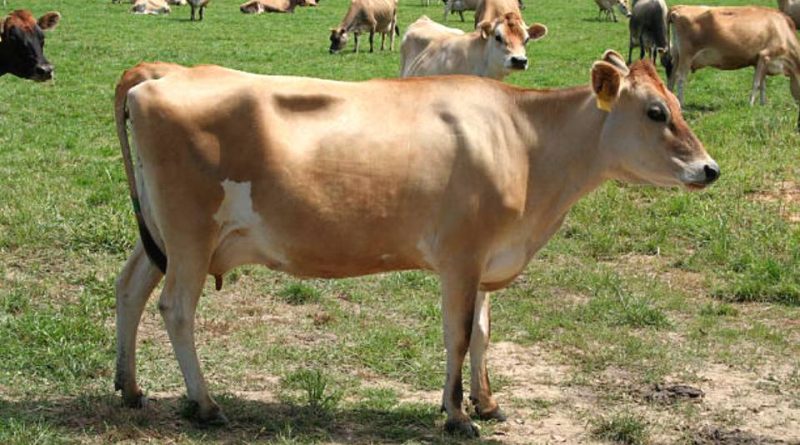 Jersey is a dairy cattle breed (Bos taurus Linnaeus, 1758), originating from the island of the same name in the English Channel.

Geographical and area distribution –
Jersey, originally from the island of the same name, where it is still raised today, was exported to various countries around the world. The most consistent nuclei of Jersey cattle are found not only in the island of Jersey, in Europe (Denmark, England), in the United States, in Canada, in New Zealand, Australia, South Africa, several Latin American countries and central.

Origins and History –
Jersey is a cattle breed that, as mentioned, is native to the island of the same name in the English Channel, located in the bay of Saint Malo a few kilometers from the French coast. Since in ancient times this island was a peninsula united to France, it is assumed that the origin of the cattle derives from a Neolithic settlement of the animals, which was later crossed with animals from the provinces of Brittany and Normandy, in a period before 1100. The orographic and morphological conditions of the island, with somewhat rocky soil, mild and windy climate and characteristic pastures, have contributed to a morphological development with a smaller size; to this we must add a local selection policy in consanguinity, originated following the overt superiority of the island’s cattle over French livestock.
Furthermore, since the importation of live livestock was prevented in the second half of the nineteenth century, this allowed the characters to be fixed well and to maintain the breed even in an optimal sanitary state. for the creamy milk and that produced excellent butter, from before 1700, when the exports of this breed began. The origin of the name Jersey is a contraction of Caesarea, which was the name by which the island was known to the Romans. According to some etymological studies it is believed that this name derives from Caesar and also the root bound to Caseum, the cheese and; in short, a very appropriate name for this breed which, notoriously, is famous worldwide for its dairy processing capacity. Jersey is today the second dairy breed in the world, for a total of about 8 million heads spread on all continents.

Morphology –
In addition to its small size, the Jersey breed is distinguished by a mantle of Fromentino color, with shades ranging from dark brown to light yellow and often with areas of white hair on the sides and belly. The bow of the tail is black. Often black hair can be found on the head. Around the black muzzle, there is a white halo.
The size is reduced; it is in fact one of the smallest bovine breeds bred, with females that on average are: 125 cm; 350-400 kg and males: 130 cm; 450-600 kg. They are very angular animals, with flat or concave profiles, with small heads and very prominent supraorbital arches, thin neck. The trunk has a triangular shape. The skin is very fine; fine skeleton. Thin limbs but sturdy ligaments.

Production aptitude –
The Jersey breed has excellent dairy capacity, both in terms of quantity and quality, due to its fat and protein content, while it is very scarce and has an aptitude for meat.
Its milk possesses contents superior to any other dairy cattle breed bred, with fat, protein and superior calcium content, but the parameters that make the difference in cheese making are the K casein bb, in higher percentages, quantity of non-protein nitrogen lower, useful subject; all parameters higher than average milk. For this reason, Jersey has a higher yield, but it is not suitable for cheesemaking due to the thickness of the fat globules (excellent for butter instead) and above-average qualitative values.
The Jersey breed is very adaptable to the most varied climatic conditions, very early as a somatic and sexual development; reaches sexual maturity towards 10 months and the first birth is very early and without any particular problems. It is also very long lived.
It is in general a very frugal, versatile animal. It has an extreme adaptability to all types of breeding, both wild and intensive. Jersey cows adapt well to different breeding options, stables linked, with bunks, outdoors or to pasture and to the most disparate weather conditions.
It has an excellent index of food conversion. This gives the Jersey cow an excellent index of food conversion into milk. Jersey consumes 4.5% or more of its body weight in the ingestion of dry substance, which is about 20% more than other breeds. Since Jersey consumes more SS per kg of body weight it spends more than its nutritional requirements for milk production and body maintenance with a lower feeding cost, since the more a cow consumes per kg of body weight, the more dry matter an efficient producer.
Jersey also has less susceptibility to major diseases of intensive farming. Compared to the average they have, in fact, 76% less difficulty in giving birth (the difficult parts stand on the breed in less than 2.5% and, in fact, the concept of ease of birth is unknown in the breed), 52% less retentions of placenta, 50% fewer mastitis problems, 81% fewer blind quarters, 75% less incidence of ketosis, 67% less animals eliminated due to limb and foot problems. They are therefore simpler and less expensive animal management.