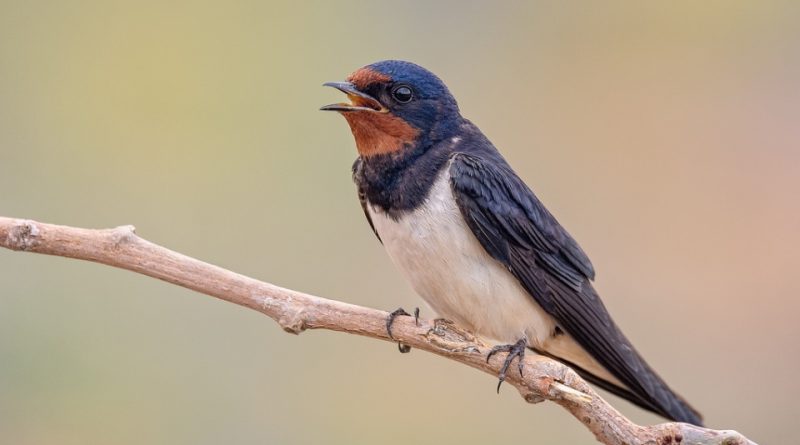 The barn swallow (Hirundo rustica L. 1758) is a small migratory bird belonging to the Hirundinidae family. 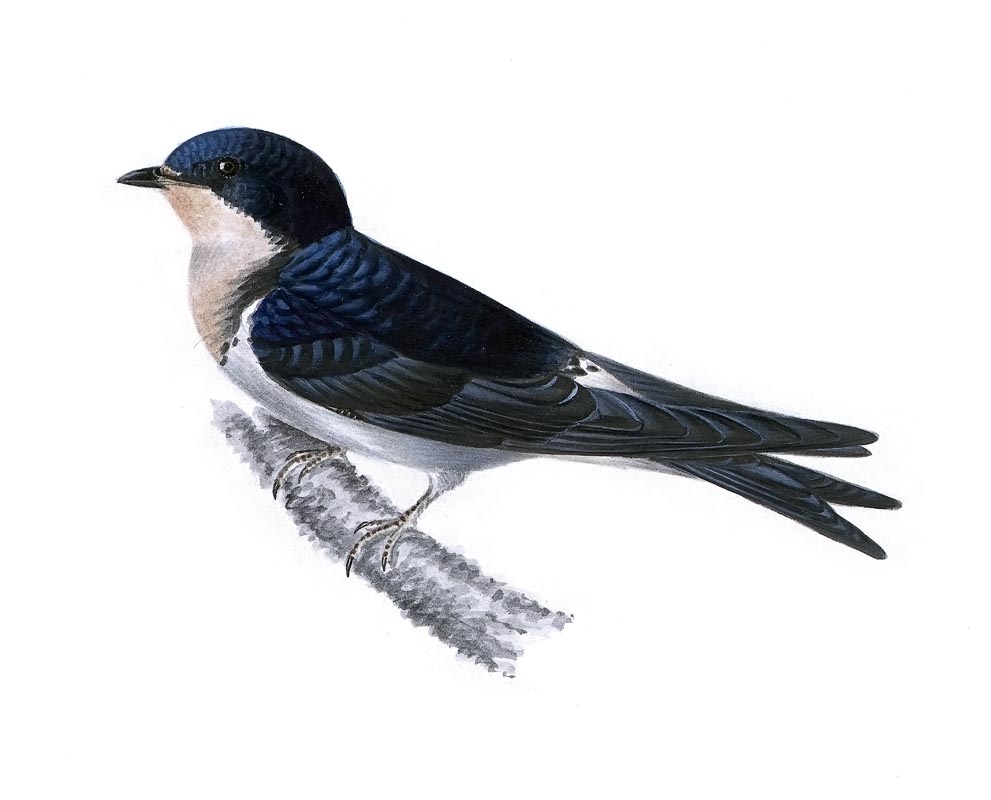 Description –
The barn swallows are up to 19 cm long, with a cobalt blue plumage in the upper parts, with chestnut front and throat and the rest of the body whitish. They have a long and forked tail, curved and sharp wings of 12-13 cm and a small straight gray-black beak.
It is also recognized because in flight it performs graceful evolutions, alternating gliding phases with sudden accelerations with frantic beats of the wings. Stancing perched on air supports (electric wires, branches, etc.), assuming an elegant position almost perpendicular to the support.

Biology –
The barn swallow is a migratory bird that from April to October nests in the northern hemisphere and then moves to the southern one where it winters.
In Italy, it usually arrives around March 21 (hence the saying that a swallow does not make spring) and remains there until early October. The female lays 2 to 6 eggs even twice a year. The eggs hatch after about 16 days. The young are fed by both parents and are ready to leave the nest after 20-24 days, but remain close to their parents for another time.
Before the spread of human constructions, the common swallows nested on cliffs or in caves; today it nests above all under protrusions in human constructions, such as roofs of houses, barns, stables: in places – therefore – where it is easier to find insects.
The nest, in the shape of an open cup, is made of mud and plant material, which the adult carries in its beak. The inner part of the nest is lined with grass, feathers and other soft materials.
The European barn swallow, which then came the bad season (September or early October) migrates to South Africa by flying in large flocks and covering up to 11,000 km to winter and return with the arrival of spring. The road they travel to reach South Africa is differentiated, most of them from Northern Europe arrive in western France, pass the Pyrenees and head towards eastern Spain, then cross the Mediterranean through the Strait of Gibraltar and from Morocco continue through the desert in the Sahara, Algeria, Niger and Chad, until arriving in the Democratic Republic of the Congo in November / December where they winter. Other flocks, including those coming from Italy, crossing the Mediterranean prefer to continue passing through the Nile valley, partially avoiding the desert areas.

Ecological Role –
The migratory flight of the Hirundo rustica always takes place during the day, feeding in flight and flying almost at ground level. This bird, like the other swallows and swifts, feeds almost exclusively on insects. It normally feeds on flies, mosquitoes, dragonflies and other flying insects. Also because of its usefulness for the man of mosquito eater during the summer, its decline is worrying. It also feeds on worms and cockroaches.
The global population of common swallows is estimated at least 200 million individuals, even if it is in sharp decline, especially in the last decades, probably due to the concurrence of several factors: the ever increasing diffusion of intensive agriculture and the use of insecticides which reduces the number of insects, and therefore also the number of swallows; the reduction of habitats and the destruction of nests, although in Italy they are protected by law, or the impossibility of building new ones; in addition, in the wintering areas the swallow is actively hunted by the local populations.