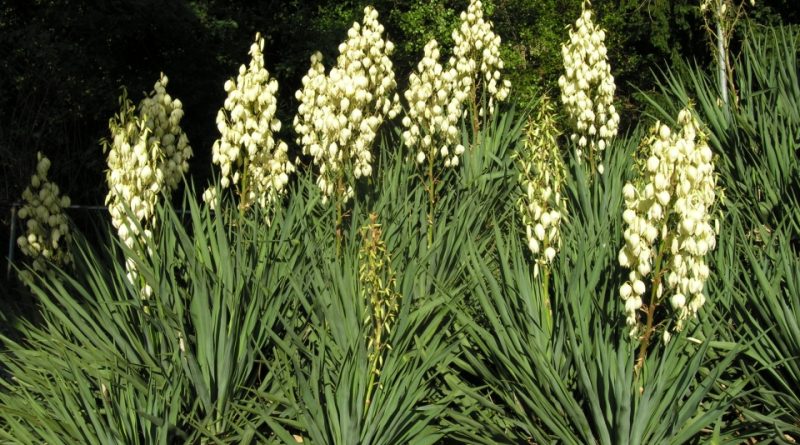 The Yucca gloriosa, or more simply yucca (Yucca gloriosa L.) is a succulent shrub species of the Agavaceae family.

Systematics –
From the systematic point of view it belongs to the Eukaryota Domain, United Plantae, Magnoliophyta Division, Liliopsida Class, Liliales Order, Agavaceae Family and therefore to the Genus Yucca and to the Y. glorious Species.

Etymology –
The term Yucca comes from yuccas dolces or yuccas bravas, names common of this plant in use in central-North America (especially Venezuela, Mexico, Texas). The specific glorious epithet derives from the Latin gloriosus, glorious: for the superb bearing of the plant.

Geographical Distribution and Habitat –
The Yucca gloriosa is a species native to the coastal areas of the south-eastern United States, in an area between the States of Alabama, Georgia, Florida, Louisiana, Mississippi, North Carolina and South Carolina. It was subsequently introduced as an ornamental plant in many countries and became naturalized in other countries such as: Great Britain, Italy, France, Portugal, Spain, Turkey, Mauritius, Réunion, Guam, Puerto Rico, Argentina, Chile and Uruguay.
In the countries of introduction it is cultivated almost exclusively as an ornamental plant. 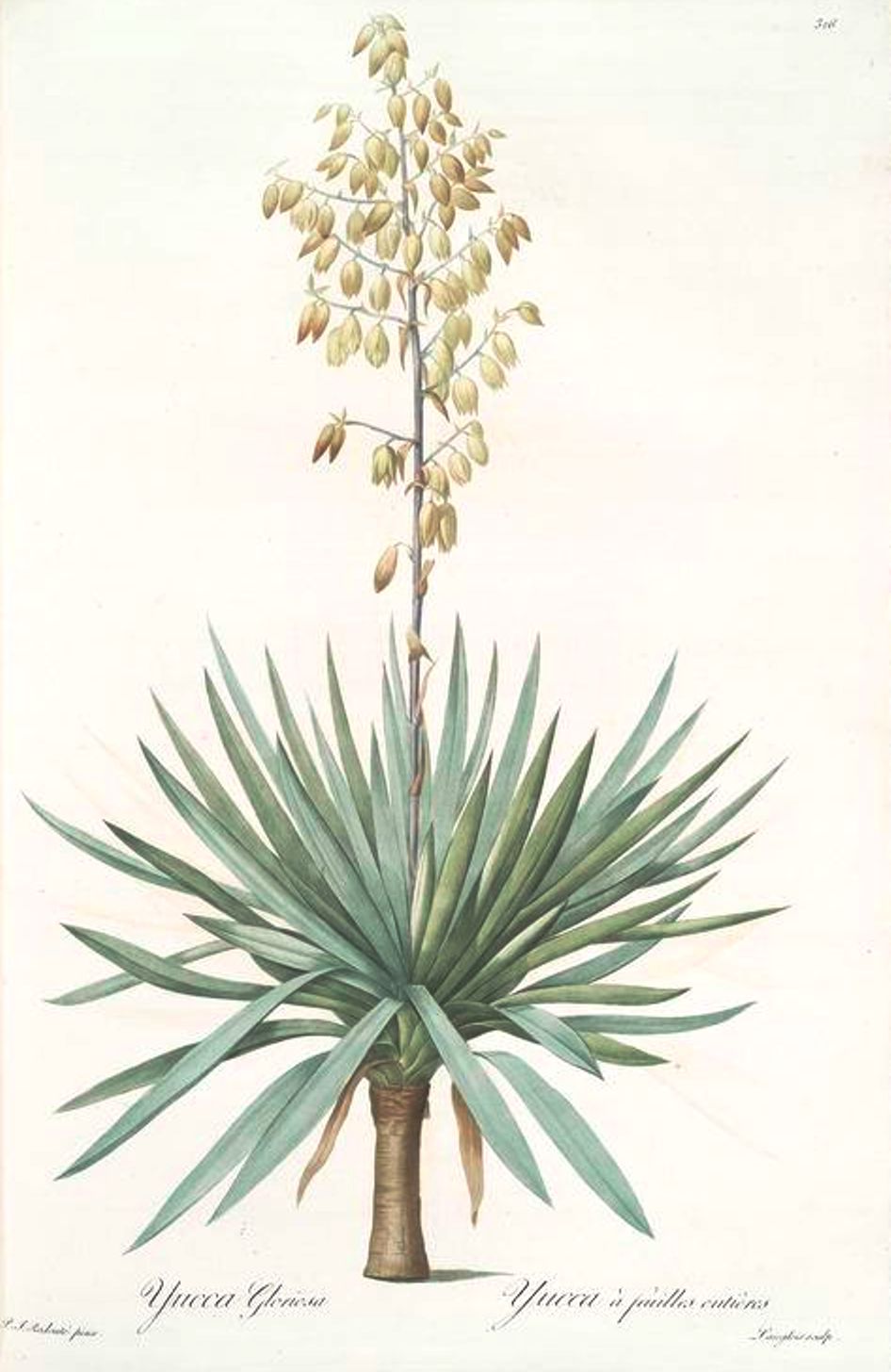 Description –
The Yucca gloriosa is a fanatic head of the cow characterized by an erect stem, simple or branched, which can reach up to 5 m in height. The leaves are lanceolate, glaucous green in color, 40 to 100 cm long, with entire or slightly serrated margins.
The flowers are white-candid, bell-shaped, perfumed and gathered in a high panicle inflorescence. The flowering period is between July and August.

Cultivation –
For its cultivation, like many other succulent plants, this species manages to collect water in the leaves and in the trunk, so it resists very well to long periods of drought and, in general, to bad weather. If cultivated well, this plant not only produces very pleasant flowers, but also dense and luxuriant foliage.
It is a plant that can be cultivated, for ornamental purposes, both in the ground and in pots. In pot the ideal for the yucca is to be near a window, without however receiving the direct rays of the sun, and at a temperature that is around twenty degrees. Every three years you need to change the vase, always using soils compatible with plants of this type. In summer it should be watered about twice a week, while in winter it is enough once a month, the important thing is to check that the soil does not dry out too much. When it is very hot it is always advisable to vaporize the leaves a little to keep them well hydrated; with the arrival of the first warm it is necessary to start fertilizing it regularly, until the beginning of winter. If cultivated in the open ground, a plant with very few needs is shown, especially in hot environments. For the details of the cultivation technique, see the following sheet.

Uses and Traditions –
The Yucca gloriosa is widespread in Italy for ornamental purposes. It is very common in gardens as an ornamental plant due to the beauty of its white flowers, bell-shaped and gathered in terminal panicles that can exceed one meter in length.
The species where more detailed studies exist are the schidigera and the glorious, which serve as a starting point in the research on the less known Yucca filamentosa L., native of central and North America and used as an ornamental plant in Europe.
These are plants characterized by a high content of compounds such as saponins, phenols, polycyclic terpenes and steroidal glycosides, which justify the application in the biological, pharmaceutical and industrial fields. Yucca has been the subject of the most varied research ranging from the medical field to the microbiological, zootechnical, food, aquaculture and packaging fields.
From the native Indians of America the yucca has been defined as the tree of life, due to its innumerable health properties. The most used part is the stem of the plant. The trunks are mechanically macerated, left to dry and then transformed into yucca powder. Otherwise the macerated material is subjected to mechanical squeezing to produce the Yucca juice which in the United States, under the authorization of the FDA – Food and Drug Administration – is used in soft drinks and in various food uses.
Over the years the study of Yucca has highlighted a strong presence of bioactive principles for human nutrition, such as the presence of polyphenolic compounds:
– ellagic acid which is considered a powerful antioxidant, antiviral and antibacterial;
– tannic acid which has antibacterial, anti-enzyme, antioxidant, astringent and antimutagen properties;
– quercetin which is a powerful antioxidant, antihistamine and anti-inflammatory;
– cinnamic and 2 hydroxycinnamic acid also considered antioxidants, antihistamines and anti-inflammatories;
– finally, gallic acid for its antimicrobial and antiviral activities.
Other important compounds present in the Yucca are saponins that lower the presence of cholesterol in the blood. The studies carried out by Bingham et al. and from Chapman et al. have found that in the blood of the Masai population of Eastern Africa, despite a diet rich in animal fats, blood cholesterol is low. This phenomenon has been attributed to the use of saponin-rich herbs added to milk and meat-based soups.
Other studies have confirmed a hypocholesterolemic activity and prevention of colon cancer thanks to saponins.
It can therefore be concluded by affirming that the saponins widely present in the Yucca can intervene in the prevention of problems related to the level of cholesterol in the blood and related to colon cancer. As for the industrial uses of Yucca, its extract is already widely used thanks to the fact that, the saponins present in it are ideal ideal foaming agents for all those carbonated drinks where the foam is appreciated. The Yucca, instead, in animal nutrition is administered to livestock and poultry to increase growth and productivity. to reduce ammonia and odors from poultry droppings. Recent studies have confirmed that the antibacterial activity of Yucca schidigera extract inhibits some rumen bacteria by modifying rumen fermentation.
An interesting aspect is that of the antimicrobial activity, antifungal, antifermentative of the yucca extract. Suffice it to say that in Japan there is already an extract of Yucca (with ethanol) devoid of taste, smell and color, which does not affect the quality of the food but is able to carry out an anti-deaerating activity to prolong the shelf-life of food products containing rice , beans, pickled vegetables, processed fish meat and fermented seasonings.
Today the Yucca extract is used in the natural washing of vegetables and fruit, to lengthen the shelf-life. In the United States of America it is sold as a nutritious supplement. Tests carried out personally on the washing of vegetables and fruit have given positive results, obtaining an increase in the conservation of the products themselves, delaying the formation of mold and inhibiting the activity of the microorganisms Saccharomyces cervisiae, whose genus can cause the swelling of the packaging caused by the production of gas deriving from undesired refermentations.

Preparation Mode –
The Yucca gloriosa, as well as other species of the genus, is a plant that, although it is grown mainly in western countries as an ornamental plant, lends itself instead to a very interesting series of uses and uses. For this reason it can be used as a food supplement for a whole range of foods, both for its active ingredients and for the food characteristics that it provides instead to the foods with which to integrate it. Among the other uses, already mentioned, it is also interesting its use to prolong conservation, especially of fruit and vegetables due to its microbial inhibition activity.