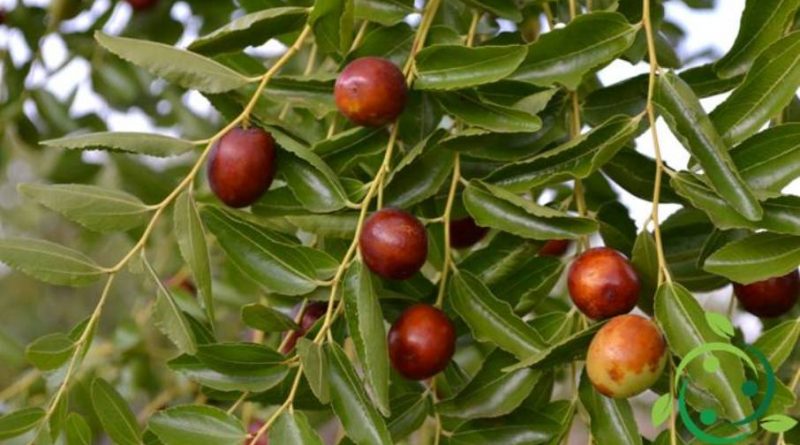 How to prune the Jujube

The jujube (Ziziphus jujuba Mill.) Is an arboreal fruit species of the family of the also known as Chinese date, natsume or tsao (simplified Chinese: 枣; traditional Chinese: 棗; pinyin: zǎo).
The fruit of the Giuggiolo is called the jujube and is a small drupe that has a single seed inside; it is more or less the size of an olive, with purplish red to brown and yellowish pulp.In this sheet we will see how to prune the Giuggiolo according to its physiological characteristics and with the aim of obtaining a good and healthy production .
Recall that the jujube is a deciduous and broad-leaved plant, generally bearing a tree and sometimes a shrub, with rounded leaves, of a light and brilliant green. The development of this plant can reach a height of 8-12m but, in the cultivation conditions it is kept lower also to facilitate the collection of jujubes.
As regards the training system of the Giuggiolo, various forms can be chosen: the column form, the spindle or the pyramid one.
For Giuggiolo, in our opinion, the most suitable form, as for other fruit trees, is the pyramid shape.
The pyramid is a form of breeding in volume. In this form the skeleton is composed of a vertical trunk that is not trunk, ending in an arrow above the crown. The primary branches are inserted in a spiral along the axis or in overlapping stages, have an inclination of about 45 ° and a length of the order of one third with respect to the distance between the insertion and the top of the arrow. This conformation gives the crown a conical profile.
If you choose the pyramid training system, the sixth plant, due to the growth in plants, must be quite large, with distances of 5-6 meters on the row and 5-7 meters between the rows, with a density of 240-400 plants per hectare. The height varies depending on the vigor of the plants and local traditions, but it is still quite high compared to the canons of modern fruit-growing.

As far as the Giuggiolo pruning period is concerned, this should usually be done twice a year. The first pruning has the aim to prolong the flowering, to give harmony to the crown and to favor the ventilation and the entrance, inside the foliage, of the sun rays; this technique, which is carried out in the summer period, has the purpose of eliminating dry and non-productive branches. Those that are too long to about 5 meters above the ground are shortened to facilitate harvesting of fruit. With the second pruning, which is usually done in the mid-autumn period, after the harvest of jujubes; this operation, especially in the colder regions, takes place after the first frost. This time the operation must be more radical to stimulate the flowering of the following summer. We use well sharpened and disinfected shears, with which we shorten the branches by about half their length and we can prune those damaged and old at just a few centimeters from the ground. Before pruning the jujube it is important to irrigate it abundantly to avoid the water stress inflicted by the cuts. The jujube lends itself however to the form of shrub farming; in this case there is no central stem and the whole plant is bred with a much smaller size. In this case we must be careful not to excessively increase the internal vegetation of the shrub and annually eliminate all the damaged branches, airing the interior and cutting off the excessively long ones.
A final mention for the harvest of jujubes that must be made when the skin becomes brick-colored, as at this stage the fruits will be less harsh and sweeter.