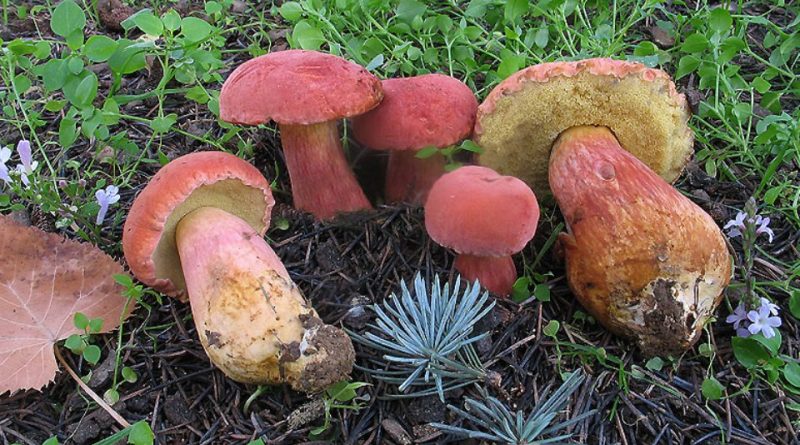 Etymology –
The term Rheubarbariboletus comes from the late Latin reubarbărum and from the Greek ῥᾶ βάρβαρον, which literally means “barbarous root” and from the term Boletus, which derives from the Greek βωλήτης bolétes, with which the Greeks called a sort of mushroom (from βωλος bólos with the meaning of glebe , clod, bush, because growing among the clods or bushes); others believe that the meaning of βωλος is to be extended to a ball, since the cap of most mushrooms is globose; for some authors it derives from the name Bolites with which the Romans referred to the best edible mushrooms, although originally referred to only ovules (Amanita cesarea), but soon used to call porcini mushrooms as well.
The specific epithet armeniacus refers to the color of the apricot, fruit of the Prunus armeniaca.

Geographical Distribution and Habitat –
Rheubarbariboletus armeniacus is a widespread species in southern Europe, especially in areas with a mild climate; it grows solitary or in groups, under broadleaf, especially chestnut trees. Fruits in the period between late spring – summer and late autumn. 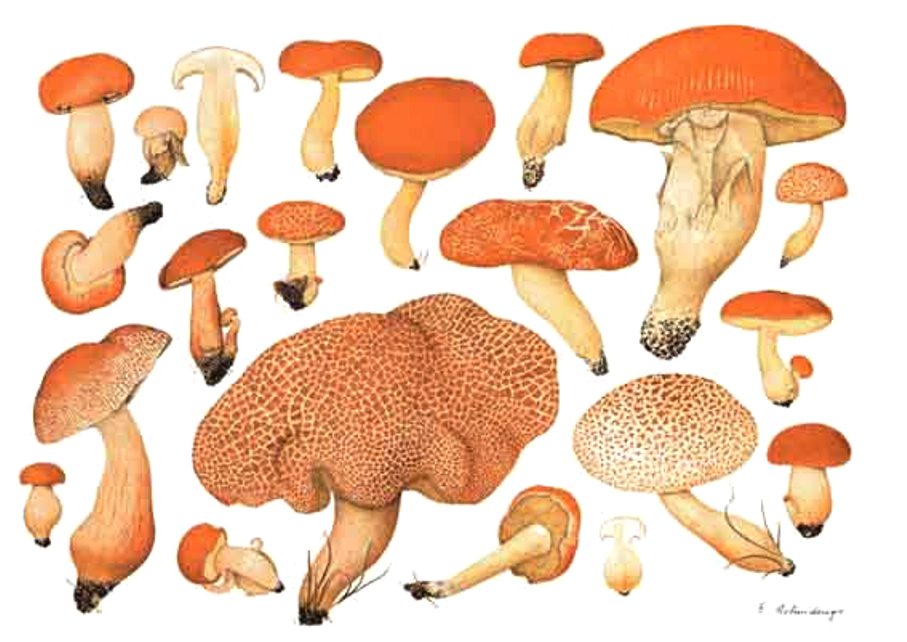 Recognition –
This mushroom is recognized by a hat of 4–10 cm in diameter, with a hemispherical to convex shape; the cuticle is dry, velvety, opaque, sometimes with cracks which in the adult fungi highlight the underlying yellowish flesh, with a color that ranges from yellow rose to apricot rose, salmon pink. The margin is convoluted and then extended.
The tubules are fine, attached or adnate, of a golden-yellow to olive-yellow color that turns slightly to bluish to the touch.
The pores are large, from round to angular, golden yellow in color, then darker with a tendency to olive-colored ocher; they too turn bluish to the touch.
The stem is 6-8 x 1–2 cm, cylindrical, attenuated at the base, almost rooting, fibrillose, white-yellow with concolorous shades to the cap. The meat is quite firm, consistent, fibrous, but soon soft and of color yellow with orange nuances, with a slightly fruity smell and sweetish taste.
At the microscope, spindle-shaped brown-olive spores in mass, 10-14 x 4-6 µm, sometimes guttulate, smooth are noted. The basidia are classic or slightly clavate, 25-35 x 8-10 µm, tetra-sporic. The cystidia are fusiform 40-50 x 8-11 µm.

Cultivation –
Rheubarbariboletus armeniacus is not a cultivated mushroom.

Uses and Traditions –
The Rheubarbariboletus armeniacus, in spite of its name means apricot, can assume different shades from its typical color. For this great chromatic variability, the Rheubarbariboletus armeniacus can be confused with similar species. The distinction with Hortiboletus rubellus (Krombh.) Simonini, Vizzini & Gelardi = Xerocomus rubellus (Krombh.) Quél. it is based on the presence in the latter of the typical red-carrot or vermilion dots in the meat at the base of the stem; Rheubarbariboletus persicolor (H. Engel, Klofac, H. Grünert & R. Grünert) Vizzini, Simonini & Gelardi = Xerocomus persicolor H. Engel, Klofac, H. Grünert & R. Grünert predominantly with growth associated with thermophilic vegetation, particularly under Quercus , is stained with greenish if it is bruised, especially in young specimens, the flesh of the stem takes on rhubarb or saffron; Xerocomellus ripariellus (Redeuilh) Šutara = Xerocomus ripariellus Redeuilh grows in wetlands, such as the vicinity of lakes or streams with Alnus, Populus and Salix, a peculiar characteristic is the stem, sometimes streaked longitudinally to livid areas especially in adulthood and the vinous colors with violet tones of the meat at the base of the stem, intensely turns to bluish in the tubules and in the median area of ​​the stem; Xerocomellus dryophilus (Thiers) N. Siegel, C.F. Schwarz & J.L. Frank = Xerocomus dryophilus (Thiers) Singer is distinguished by its exclusive growth under Quercus, brilliant cuticle and viscous species at humid weather, pileic colorations of a beautiful cinnabar red in youth, chrome yellow at the apex of the stem, dark red at its base. The flesh, at the base of the stem, presents purplish-red tones tending towards blackish, it turns slowly to bluish elsewhere to the section. As regards its edibility, the Rheubarbariboletus armeniacus is to be classified as a good edible on condition that the stem is eliminated in how little digestible.

Preparation Mode –
This fungus, once the stem is removed, lends itself to being consumed and preserved similarly to other edible boletes.