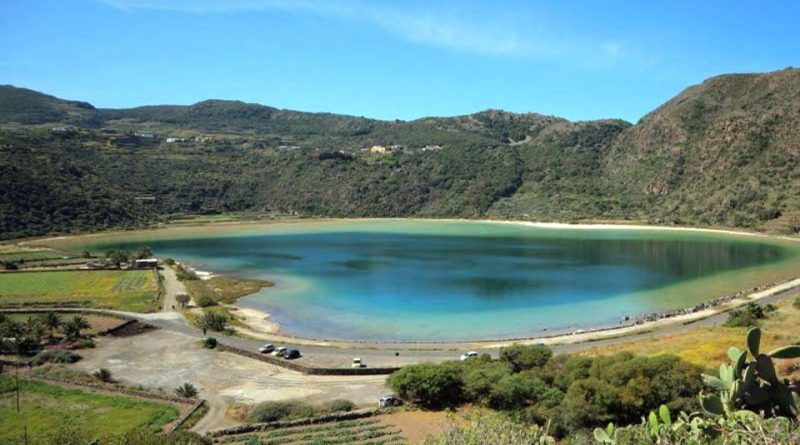 The Pantelleria Island National Park, whose WDPA Code is: 555529737, is a protected natural area located in Sicily, on the Island of Pantelleria.
The Park was established by decree of the President of the Republic of 28 July 2016 and is, in chronological order, the last Italian national park to be established, and the first in Sicily.
The National Park of the Island of Pantelleria, occupies 80% of the island, with a variety of landscapes related to the volcanic nature of the island: lava flows, favare, volcanic lakes and thermal waters. Dry stone walls and terraces testify to ingenious agricultural practices of ancient memory, preserving precious biodiversity. In 2014, the “Agricultural Practice of the Vine in Alberello” was included on the UNESCO list as Intangible Cultural Heritage of Humanity and in 2018 the “Dry stone landscape of Pantelleria” was inscribed on the National Register of Historical Rural Landscapes. Among the cultivations with vines, olive trees and capers sprout the dammusi, ancient units of lava stone walled dry with white domed roofs. The archaeological areas are a widespread museum in the area: settlements dating back to the Bronze Age, a 16th century BC village, megalithic tombs unique in the world, a late Punic Acropolis and a late Roman settlement of the 5th century AD
The territory of the park is divided into three zones:
– zone 1, of significant naturalistic, landscape, agricultural and / or historical, with no or minimal degree of anthropization;
– zone 2, of naturalistic, landscape, agricultural and / or cultural-historical value, with limited degree of anthropization;
– zone 3, of landscape and / or cultural-historical value, with a high degree of human settlement.
The surveillance of the territory is entrusted to the Forestry Corps of the Sicilian Region, together with the Command Unit for forest, environmental and agri-food protection of the Carabinieri.

La Flora –
The vegetation of the island of Pantelleria is quite complex, compared to the other Sicilian islands. From the sea level up to 250 m of altitude we find the low scrubland or garigue referable to the community of Periploco-Euphorbietum aspalathoidis; besides we find a shrub-arboreal vegetation with pine forests of Pinus pinaster and P. halepensis, mixed with Quercus ilex, which is part of the association Pino-Genistetum aspalathoidis, in which different species participate, including Erica spp., Rosmarinus officinalis, Cistus spp. ., Calycotome villosa and Genistha aspalathoides. At altitudes above 500 m and in the valleys there are pure thickets of Q.exex. The climatic vegetation is represented by the Erico-Quercetum ilicis, characterized by the presence of Q. ilex, Erica arborea and Arbutus unedo, which are also accompanied by Pistacia lentiscus, Phyllirea angustifolia, Daphne gnidium, etc. The abundant bedding and the humus layer of these woodland environments host numerous species belonging to the mesofauna, an index of high diversity both at the level of the litter and at the level of the first 20 cm of soil, in different areas of the undergrowth.
In these habitats we find a total of census species (as of 2014) equal to 640 species, including 13 endemisms and 63 rare and very rare species for the island. The following is a list of endemic species:
Anthemis secundiramea ssp. cossyrensis, also reported for the Maltese islands;
Filago lojaconoi, also reported for Linosa;
Genista aspalathoides var. gussonei, typical of the maquis and garrigue;
Helichrysum rupestre var. errerae, variety located in the stretch of coast between Suvaki and Punta Tre Pietre;
Limonium cossyrensis, found only along the coastal area between Arenella and Punta Tre Pietre;
Limonium secundirameum, limited only to the external part of the southern shores of the Specchio di Venere Lake;
Matthiola incana ssp. pulchella, typical subspecies of the rocky Pantelleria coastal areas;
Medicago truncatula var. cossyrensis, found in uncultivated arid;
Plantago afra ssp. zwierleinii, also found in the Pelagie and Maltese Islands, typical of uncultivated arid and pastures;
Sedum rubens var. cossyrensis, typical of stony places, even very little land;
Senecio leucanthemifolius var. cossyrensis, typical of uncultivated near the sea;
Serapias cossyrensis, an orchid typical of the most advanced stages of the succession of the Mediterranean maquis from 300 m to 836 m of the Great Mountain;
Trifolium nigrescens ssp. nigrescens var. dolychodon, typical of arid and uncultivated meadows.
From a phytosciological point of view, the main community of the island is the Mediterranean maquis, which presents itself with all the main aspects, from the pioneer stages to the climax, represented by holm oak woods of Quercus ilex (ballùtu), some of which are centenarians.

In the higher areas Pinus pinaster (maritime pine, zappínu) is dominant, considered among the oldest biodiversity reservoirs of the species. Along the most arid and south-facing stretches of coastline prevails Pinus halepensis (Aleppo pine, déda or zappínu mánzu). Most of the territory is occupied by the low bushy scrubland, dominated by genera such as Erica, Pistacia, Calycotome, Cistus, Arbutus unedo (corbezzolo, mbriákuli) etc. In the drier or more wind-swept areas, close to the sea, the low spot gives way to garrigue, with xerophytic species, adapted to the chronic lack of water such as Thymus capitatus, Rosmarinus officinalis, Thymelaea sp. Other typical elements are vegetation of the Bagno dell’Acqua lake, a volcanic crater that hosts a hygrophilous grassy and bushy vegetation typical of brackish wetlands, and that of the cliffs, typically halophilous and xerophytic. To these are added the very special communities of thermal environments, dominated mostly by microflora (cyanobacteria) and hygrophilous species.

Fauna –
Also from the faunistic point of view, Pantelleria is characterized as a link between southern Europe and northern Africa. To date, faunal populations are only partially known, with some insights only on some terrestrial animals, such as vertebrates and especially insects.
As far as the latter are concerned, the territory of the island is decidedly heterogeneous, a characteristic that allows the presence of multiple ecological niches. Environmental heterogeneity means the presence of multiple refuge areas for any animal or plant, in which any predators or competitors cannot reach. All this reflects on the total number of species of Arthropods (large grouping of animals such as insects, crustaceans, spiders, centipedes, etc.) known to the island, greater than the other islands. In particular, for Pantelleria 1096 different species of arthropods have been counted, many of them of African origin and some of which have Pantelleria as the only home in the world. In particular, for the island of Pantelleria 14 endemisms have been found at the time:
among the isopod crustaceans (little pigs of St. Joseph, purceddrúzzi of San Ghjuséppe) we cite Spelaeoniscus vandeli, which probably evolved from a similar African species;
among the crickets, Gryllotalpa cossyrensis, circumscribed on the shores of Lake Venus, among the bugs, Apterola kunckeli focarilei, among the beetles (beetles, cetonias, ladybugs, woodworms, etc.) Danacaea caneparii, Heliopathes avarus donatelae, Pachychila crassicollis cossyrensis, Acmaeodera bipunctata romanoi, Scymnus caprai, Stenostoma cossyrense, Alaocyba separanda, Otiorhyncus cossyrensis, Pseudomeira cossyrica;
among the ants, Leptanilla poggii, an ant with an intense dark yellow exoskeleton observed for the first time in 1991 in a litter sample at the base of holm oaks in the Ghirlanda Plain.As for reptiles, we remember the snake Coluber hippocrepis, a species of the Mediterranean western (Ibero-Sardinian-Maghreb) which, migrated from Tunisia in ancient times, settled in Sardinia and subsequently in Pantelleria. Several species of lizards of African origin have been found, including Lacerta podarcis sicula.
As for the avifauna, the variety of birds on the island is remarkable: 260 species, many of which nest permanently and others were observed during the migratory season, in spring and autumn. Indeed, Pantelleria is on the main migratory routes and is a place to stop and rest on the journey between Europe and Africa. Among the birds of prey we remember the steppe eagle and the peregrine falcon. Near the waters of Lago Specchio di Venere it is not rare to see gray and red herons, pink flamingos, cranes, knights of Italy and storks. To this wealth, we add some nesting species among which two rare that, in Europe, nest only on the island: the Iberian beccamoschino and the Algerian blue tit.
Since Pantelleria is a bridge between Africa and Europe, many species of birds cross the Mediterranean in both directions, even rare species, such as the enigmatic Queen’s falcon (Falco eleonorae), whose black silhouette frequents the skies of the island. Other species of the Falconiform family are present: the black kite, the peregrine falcon, the buzzards, the harris. A show to be admired is in spring when large flocks of these arrive from Africa, sailing on the sea, transported by updrafts. It is not difficult to see in the skies of the island the white outline of an Egyptian vulture or lesser eagles like the Bonelli’s eagle and the harrier. However the Falco most characteristic of the island is “u Sicarro”, the kestrel, a sedentary species that has colonized all the cliffs of the island. Other rare birds that frequent the island are the Gruccione (Merops apiaster) locally called scilakilà, the jay marine, the upupa (katabúbbo), the oriole called ghiannúni, all birds appreciated for the color of their plumage. They must be counted among the island’s regular visitors, thrushes, blackbirds, woodcocks, quails, although the waders must be given proper mention: very many are the Gray and Red Herons, the Night Herons, the Garzette ciuffetto, the Cavalieri d’Italia, the Avocette and the Cranes. A nod to the Big Mountain which is the only European station where the colorful Algerian Blue Tit nest and, as mentioned, the rare Beccamoschino.
Among the mammals, the Plecotus bat is mentioned, present above all in the natural caves of Gelfisér. The wild rabbit is very widespread, a scourge for the cultivation of vines. We also remember the small rodent Crocidura ichnusae, a small mouse present only in Tunisia, Sardinia and Pantelleria.