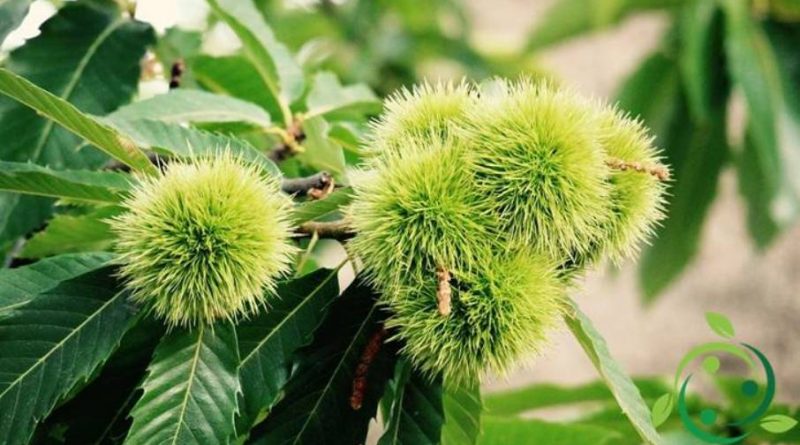 How to prune chestnut

The European chestnut (Castanea sativa Mill., 1768) is a tree of the Fagaceae family that can reach considerable dimensions, in nature its maximum height is 30 meters with an extension of the foliage of about 15 meters; it has a columnar habit and a very expanded globose crown.
In this card we will see how to prune Chestnut to optimize its production capacity. These are monoecious plants with female flowers, easily recognizable with their curled-up appearance and male flowers (catkins). Chestnut is an auto-sterile species, so the presence of different varieties is required for pollination. Moreover, as for other fruit plants, the chestnut is also subject to the phenomenon of alternating production between different years. Among other things, not all plants show the alternation of production the same year, so with targeted pruning interventions after 8 – 9 years of age this phenomenon can be limited.
Finally, remember that chestnuts are produced mainly outside the foliage, so it is necessary that the development of the plant be left free. For this reason, the forms of chestnut training must support the natural posture of the foliage.
Let’s start with the characteristics of the chestnut plant; this is a heliophilous species, which therefore needs an open environment and a full sun exposure in order to be able to vegetate at its best; for this reason, having to make the hair develop at its best, the planting distances will have to take this aspect into account as well to avoid the deterioration of the lateral branches that can be caught by dry matter. In general the planting layouts change according to the cultivated variety. The large-fruited varieties require a distance of 8 meters between the plants and 9 meters between the rows, while the Euro-Japanese hybrids instead require about 6 meters between the plants and 7 meters between the rows.

The first pruning to be performed is that of training
The chestnut breeding phase generally ranges from 4-5 years in Japanese hybrids to 6-7 for European ones. During this time it is necessary to give the plant the basic structure.
In this sense the first intervention, during planting, is to equip the plant with a support pole, to give the plant a support and guide during the growth phase; in general it has a length of about 3 meters of which one meter will be buried. It is at this time that the first shortening of the main beam will be carried out at a height variable between 120 and 130cm.
Subsequently, after the first year of planting, the suckers that will grow from the plant stock should be removed. The cut must be made at the attachment of the sucker and sometimes it may be necessary to remove the soil to facilitate this operation.
In this period the main shaft will have emitted some gems, to continue the development of the main axis, then one will be chosen in a vertical position. Subsequently, when the main stem reaches an important height, the branches up to a height of 3-3 , 5 meters must be removed completely; you will leave this part completely devoid of vegetation.

The breeding of the branches will then take place at 3-3.5 meters, this is because the chestnut tree has a tendency for the branches to lower, so a greater height is required to facilitate the various processes. These branches must be bred freely, without making any cut or intervention.

Given this conformation, we then move on to pruning production
In production pruning it must be taken into account that the plants that already bear fruit must be pruned annually.
The interventions consist in first eliminating the suckers that form at the base of the stump; the suckers that develop on the branches and on the trunk must also be eliminated.
It is possible at this stage that any branches uprooted from the weight of the snow or from bad weather should be eliminated. for this reason intricate and damaged branches will have to be eliminated.
Arrived beyond the ninth – tenth year of age, to favor the production one intervenes with pruning against the foliage. This is a technique that must be performed on all the cultivars but especially for the Euro-Japanese ones. This is a practice aimed at increasing production that must be carried out every two or three years. The technique consists in thinning out part of the branches and sub-branches, inducing the plant to produce new fertile vegetation, this is because fructification occurs mostly on branches of one year of age.
This pruning must be made through return cuts to the branches of the sub-branches and the main branches. These interventions must be more accentuated on plants that have less vigor and have a poorer production. In the case of plants with stunted production capacity it is necessary to intervene by reducing the foliage by about 30%; this intervention is done on branches 20-30cm long.

Now let’s look at the technique of renewal pruning
This pruning mainly affects the short branches, with lengths of up to 30 cm, placed on the branches and on the sub-branches. These are normally not very productive; making a cut however the plant is put in conditions of producing new vegetation. Renovation interventions must be carried out when the ramifications are affected by bark cancer to prevent the spread of fungi, eliminating vegetation from the point of origin.
A true renewal pruning occurs when the highly developed plants, which have many years of life, need a much more drastic intervention to induce them to produce again. We will have to act at the level of the branches and sub-branches with intertwining operations of these branches. Obviously you will have to act with suitable equipment such as saws or chainsaws.

Finally we see the green pruning technique
This operation concerns above all the suckers that form at the base of the strain and that if grown, they take sap from the chestnut plant making it produce less.
Remember that all pruning operations must be carried out with sterilized tools and, especially in the case of larger cuts, copper-based products must be applied to the interested parts.
Moreover it is good that every part removed should be removed from the chestnut wood and, if this is not possible, immediately burned to avoid the spread of fungal diseases such as those generated by the fungus Endothia parasitica.
If, moreover, some twigs remain after pruning it is advisable to eliminate them and leave the lawn as clean as possible.