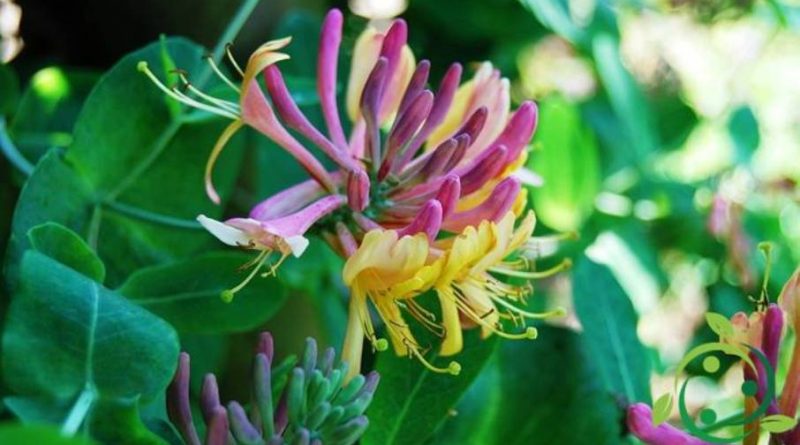 How to grow honeysuckle

The Lonicera caprifolium, also known as Honeysuckle, is a plant belonging to the Caprifogliaceae family. This genus includes plants commonly known as honeysuckles. Among them are the alpine honeysuckle (Lonicera alpigena), the common honeysuckle (Lonicera caprifolium), the Mediterranean honeysuckle (Lonicera implexa) and the hairy honeysuckle (Lonicera xylosteum). On this page we will see How to cultivate Honeysuckle, referring to particular to the Lonicera caprifolium.
Lonicera caprifolium is a climbing species, native to Italy, also called “Madreselva”. It is a deciduous species, which represents the common honeysuckle, with climbing habit, good strength and vigor (it grows up to 7 m in height). Its leaves, ovate or obovate, not persistent, have the characteristic of being petiolate or perfused (the sheath of the leaf wraps the branch in the absence of petiole) depending on whether they are, respectively, at the bottom at the apex of the plant . The flowers, intensely perfumed, of a creamy yellow color with pink shades, 3-5 cm long, appear from May onwards, gathered in bunches of about 6 specimens, in the center of the apical leaves.
It is a vigorous climber, with twisting stems that cling to any support they find, or develop, streaked. This plant also has great vigor and a long scented flowering, which lasts all summer.
It is also a plant of easy cultivation provided that it is cultivated in a fresh soil, endowed with organic substance, choosing a sunny position; the only attention is to make sure that the base, or foot, of the plant is kept slightly shaded, to protect the root system.

When planting young seedlings, remember that, until their root system is fully formed, it will be necessary to water them, especially in hot weather, so that the substrate is never dry. Subsequently, the stamped and grown plants are satisfied with the rains.
As far as planting is concerned, the following is an indication of how to operate. Bisogna prepares the soil with a deep dig to eliminate stones and weeds and add manure; in heavy soils also add planting soil, in sandy ones, where possible supplement with more clayey soil.
Before the installation, the plant must be immersed in a bucket of water to properly humidify the clod of earth; in this case the technique of lifting is excellent.
After 24 hours, you dig a hole 40-50 cm wide and deep, to add mature manure (or other organic substance) to the bottom of the hole and earth. Place the plant, with its support, taking care not to bend the roots and making sure that the collar of the plant is perfectly at ground level. At this point it is filled with additional soil, slightly compacted and watered abundantly.
As soon as it is planted, the ends of the branches must be pruned to make the plant stronger, and guide the twigs towards the support. The new shoots wrap around the support. If, on the other hand, the honeysuckle is planted against a wall, a support such as the modular grids must be prepared in advance.
It is recalled here that the honeysuckles can also be grown in pots, at least 50 cm deep, in a mixture composed of equal parts of frank vegetable soil and plantation soil.
Once planted and in good condition and in a favorable situation, the honeysuckles, as mentioned, are not demanding plants. The only care should be to regularly water the young plants during the two years following the plantation so that its roots they can free themselves in depth. Adult plants withstand temporary droughts, which block growth and flowering. If instead we are in the presence of dry periods, some abundant waterings (15-20 liters of water) will be necessary.
Before the vegetative growth in spring, then distribute good mature organic fertilizer at the base of the plants, taking care to mix it in the superficial part of the substrate. Furthermore, during the growth of the new shoots, the shoots must be guided so that they are distributed harmoniously on their support.
The Honeysuckle, also from the phytosanitary point of view, is a somewhat resistant plant. Generally it does not fear diseases or parasites, but particular situations of humidity stagnation and lack of illumination may cause dusty attacks. In this case it is possible to intervene with fungicides based on Bordeaux mixture.