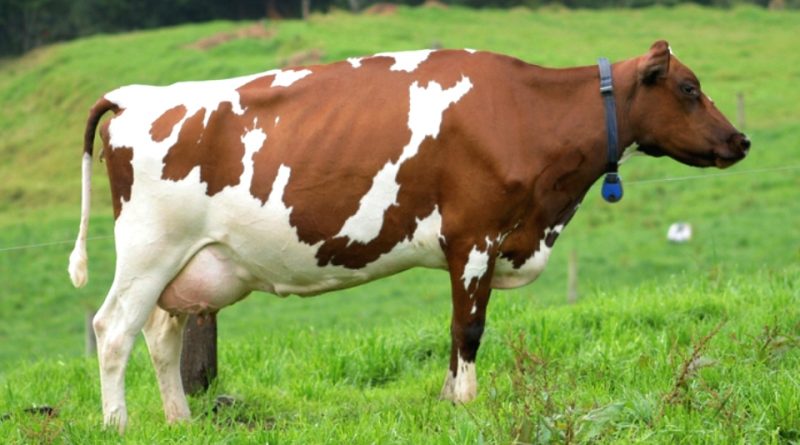 Ayrshire is a bovine breed (Bos taurus Linnaeus, 1758) from milk from the county of Ayrshire in the south-west of Scotland.

Geographical and area distribution –
The main breeding area of ​​the Ayrshire breed was the county of the same name, near Glasgow, in the south-east area of ​​Scotland: it is an area with a rather harsh and cold climate especially in the winter months, climatic conditions that allowed vacca ayrshire to be selected by nature to obtain very strong and rustic specimens, able to withstand even the most unfavorable environmental conditions and to feed even with poor and / or poor fodder.
Ayrshire is today a breed present throughout the world, particularly in North America (United States and Canada), Finland and Sweden.

Origins and History –
The Ayrshire breed is native to the county of the same name near Glasgow in the south-east of Scotland. This breed is believed to be descended from Celtic brachicera cattle.
In fact, Ayrshire has rather ancient origins; it was in fact already known at the time of the Celts and a first official recognition of the breed took place around 1814 and from that moment on it has undergone numerous exports all over the world thanks to its appreciated milk production because it produces a milk particularly suitable for cheese making (fine curd – small globules) and has high adaptability to grazing in all environments (especially in cold climates).

Morphology –
The Ayrshire breed is characterized by a typical white and red spotted coat. Red can range from orange to dark brown. The spots are irregular and the white clearly prevails. The bow of the tail is white. They are animals of great strength and for the ability to effectively convert forage into milk. Today the strengths of the breed are ease of childbirth and longevity. The musello is rosy or fleshy red, the horns are of medium length, facing up and forward (lyre-shaped).
They are not excessively sharp animals, with flat or slightly concave profiles, long and thin neck, excellent thoracic depth and abdominal capacity; moreover, the morphology of the udder is strong with strong attacks. The head is also harmonious, of medium size, with a flat or slightly concave profile.
The Ayrshire breed is medium in size, with females reaching 138 cm and 550-600 kg and males having a height of 145 cm and weighing 850-900 kg.
In the group of Ayrshire cattle, we mention the Finnish Ayrshire (Suomen Ayrshire) which is the Finnish stock of the homonymous English breed. it is an extremely fruitful and productive stock.
this subrace features a mahogany-red dappled coat, lyre-like horns, and fleshy red muzzle.
These are cattle with a prevalent aptitude for milk production.

Production aptitude –
The Ayrshire cow is very appreciated for its milk, which is particularly suitable for dairy processing, both for fat and protein content. In addition to the quality of the milk itself, Ayrshire also has a very abundant lactation, while for meat production it is at mediocre levels.
On a sexual and somatic level it has a rather early development, and fertility stands at good levels without any particular problems at the time of delivery.