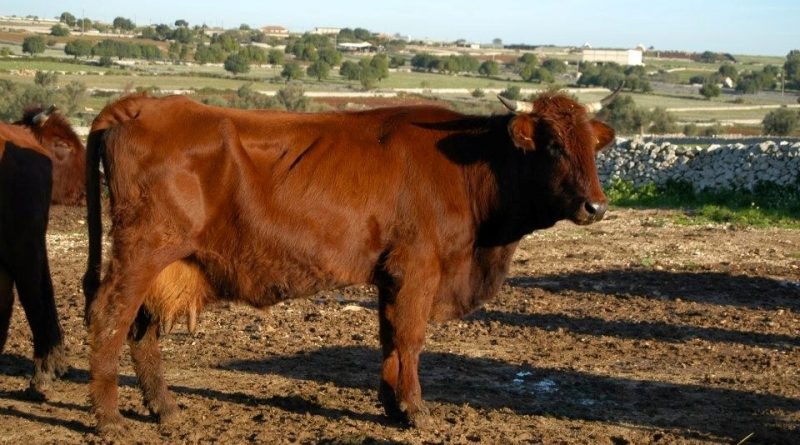 Geographical and area distribution –
The Modicana is a cattle breed originating from the ancient County of Modica (RG) from which it takes its name. It is considered a minor breed due to the few specimens still present in Italy, around 2000 of which only 650 in its area of ​​origin. From the area of ​​the Modicano it subsequently spread throughout the island, adapting to the different pedoclimatic situations, and then exported, in the early 1900s, also to Sardinia where it gave rise to the Modicana Sarda. The Genealogical Book of the Modicana breed was established in 1952.

Origins and History –
As for its remote origins, the debate is still open. According to some authors it came from the Mediterranean, according to others from continental Europe, following the Normans and Angevins. What is certain is that the Modicana breed has always been bred in Sicily since it is populated.
Subsequently, with the advent of agricultural mechanization and with the competition of other more productive breeds the Modicana suffered a gradual decline linked also to the poor yield both in milk (3000 liters a year) and in slaughter (less than 55%) and to the fact that many companies have stopped processing milk directly into cheese. Thus we have progressively passed to the reduction of the garments that from the 25,000 of the 60s of the last century have passed to the current 2,000.
The Modicana breed was included in the Registry of the indigenous bovine populations and limited-spread ethnic groups, established in 1985 in order to safeguard the cattle breeds bred in Italy, threatened with extinction and for the protection of these genetic heritages. Experimental Zootechnical Institute for Sicily has activated itself for the study and conservation of germplasm of the Modicana breed; 12,000 doses of semen were taken, which were stored at the Italian Zootechnical Center, and made available to breeders via ARAS. At the experimental company Giardinello is bred a nucleus of Modica subjects of high genetic value where they are studied, in collaboration with the Department S.EN.FI.MI.ZO. of the University of Palermo, the productive and reproductive characteristics.

Morphology –
The Modicana breed is a bovine characterized by a coat of uniform dark red color, with shades ranging from the black of the bulls to the light brown of the cows. The black shades are found mainly in the front and on the outer face of the thighs. In general, the male’s coat is darker than the female, although generally it has a uniform dark red color, often softened by a graceful tuft on the head and by the black bow of the tail.The musello is dark red, the natural openings black slate, the claws are black, the horns yellowish at the base and black at the tip. The udder is large with the often disharmonic quarters and the long and large nipples. The size and stature of the Modicana are modest, with very angular forms and a very solid skeleton. The male can reach 160 cm at the withers for a weight of 900-1000 kg, while the female generally reaches 145 cm at the withers with a weight of 550–600 kg.

Production aptitude –
The Modicana breed is presented as a triple-attitude, extremely rustic, which manages to survive the torrid Mediterranean summers, feeding mainly on pasture with an integration in the stable in the periods in which this is scarce.
The Modicana is characterized by excellent characteristics for work and discrete for milk (also taking into account the extremely poor food treatment). Milk production averages between 18 and 22 kg per day, in a lactation of 200-220 days, with a fat percentage of about 4%. Poor attitude to the production of meat but very valuable and sought after in traditional cuisine. In the past, the Modicana breed was bred for work (because of very strong limbs and claws), today exclusively for milk. In fact, with the Modicana milk, some typical Sicilian cheeses are produced, such as Caciocavallo Ragusano DOP.
As far as farming methods are concerned, the Modicana breed is bred in the wild all year round and only hospitalized for the milking operation. Like all wild cows it gives milk only if, beside it, there is the calf that stimulates the production of oxytocin. This happens in response to the stimulus of feeding with a semi-voluntary release. The quality of Modicana’s milk is excellent and is the ideal raw material for the typical cheeses of the area.
Furthermore, completely wild breeding also guarantees the very high quality and wholesomeness of the meat, to say the truth still not valued. therefore not only the Ragusano DOP but also the quality of the meat, focusing on the improvement of production, processing and educating the consumer to distinguish the quality.
This is because the meat of animals bred on pasture are more difficult, as it is necessary to identify and fine-tune the exact degree of maturation, that is the particular process of maturing that makes the meat more tender, otherwise it may be harder and tougher than the others. .
Moreover, they do not always meet the favor of the average consumer, who does not like the more intense red color of the meats and the yellowish color of the fat parts (due to the presence of carotene in the pastures). In this sense, pilot projects are already planned for the involvement of farmers and consumers.