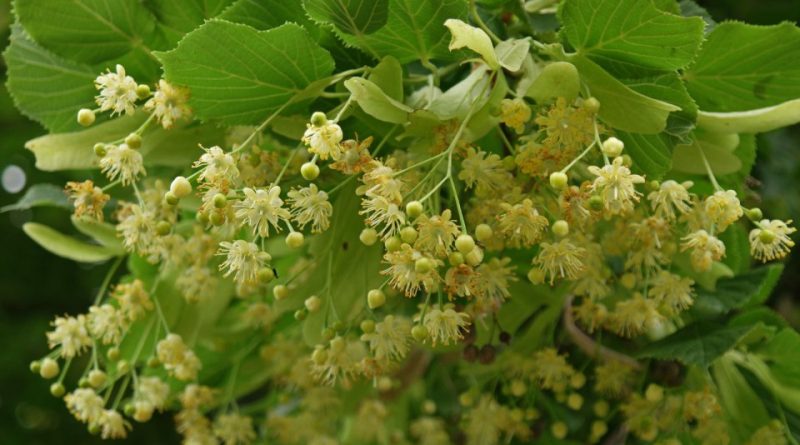 The Linden (Tilia cordata Mill.) Is a deciduous tree species belonging to the Tiliaceae family.

Systematic –
From a systematic point of view it belongs to the Eukaryota Domain, Kingdom Plantae, Magnoliophyta Division, Magnoliopsida Class, Malvales Order, Tiliaceae Family and therefore to the Genus Tilia and to the Specie T. cordata.
The terms are synonymous: Tilia parvifolia Ehrh. And Tilia sylvestris Desf ..

Etymology –
The term Tilia derives directly from tilia, the Latin name of the lime tree in Virgil and Columella. The specific epithet roped, means heart-shaped, heart-shaped, from cor, cordis heart, referring to the shape of the leaves.

Geographic Distribution and Habitat –
The Linden is a tree native to Europe and the Caucasus. is a rather sciafila species, which prefers fresh and fertile soils, at neutral pH or not too acidic and tolerates marly soils.It is widespread from Spain (Basque Country, Catalonia, Pyrenees) to the Urals almost seamlessly. To the north it goes as far as southern Finland, south-central Sweden, the Norwegian coasts and south of Scotland. It is present in the Balkans up to northern Greece and in Corsica. Disjointed areas in the Crimea and the Caucasus. In Italy it is present in the Alps and on the Apennines up to Basilicata. It goes up to about 1500 meters and is very rare in the Mediterranean area. 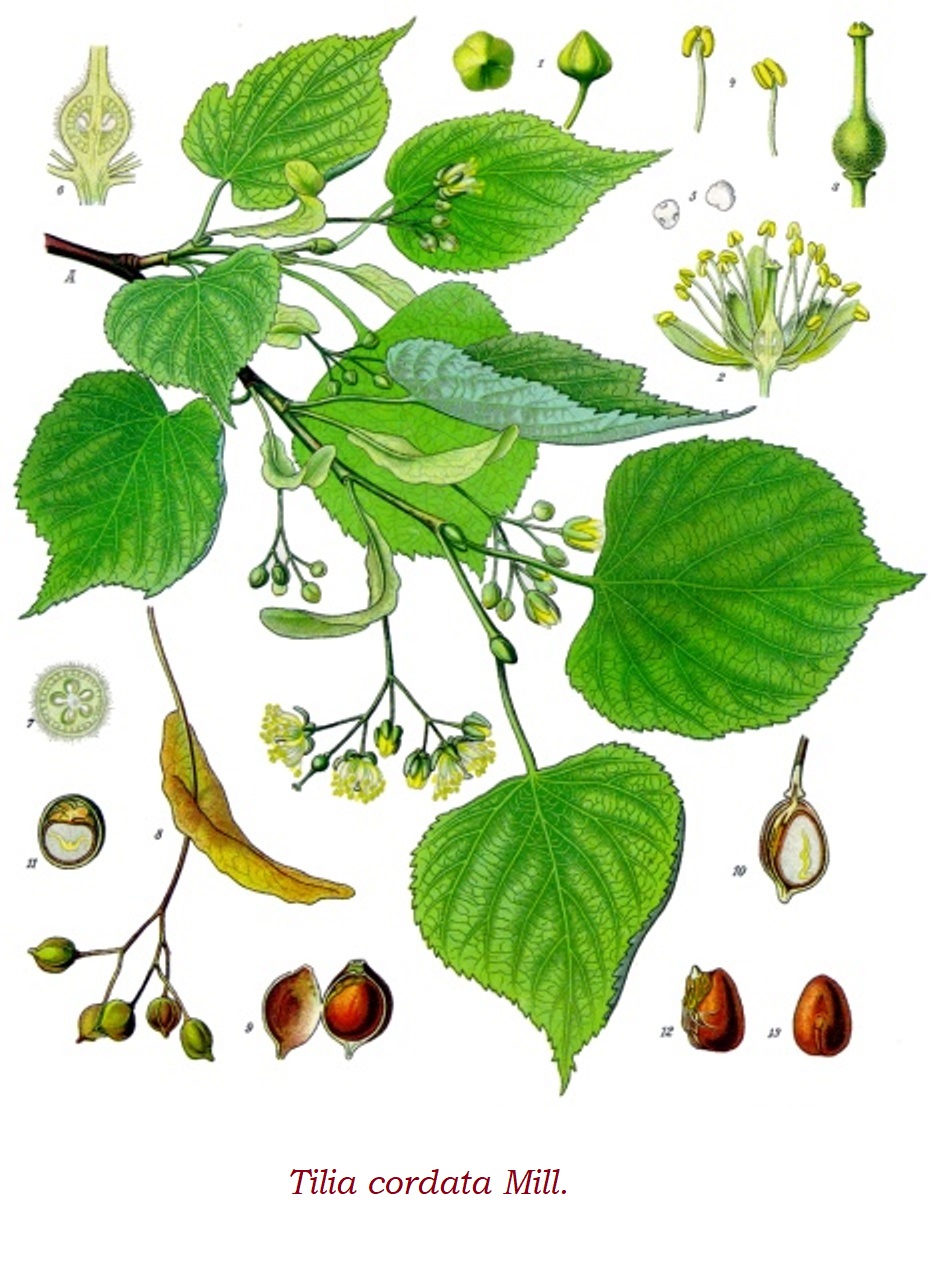 Description –
Tilia cordata is a tree that can reach 30 meters in height, with rounded crown, straight trunk, greyish and smooth before, then rough and furrowed. The leaves are 3-9 cm long, with an asymmetrically heart-shaped base and sharp tip, finely serrated edge; the upper page is dark green and a little glossy, the lower page is glaucent, glabrous, except for small tufts of reddish brown cottony hairs in the armpits of the ribs. The flowers are yellowish, fragrant, in clusters of 4-15 small flowers, with aliform bract. The fruits are small achenes, ovoid in shape that when they come off they use the winged bract to be transported by the wind.

Cultivation –
The wild linden is a plant that grows well in fresh, deep and pH-neutral soil, rich in humus, while it does not tolerate clayey, compact or sandy soils. On acid soils supplant the whole of the local lime tree that does not tolerate the acidity of the soil. It resists better than the local Lime with summer aridity, however it requires humidity of air and soil and exposures in half shade being a sciaphilous plant. The multiplication of the plant occurs by seed or by the root suckers. In the first case it is advisable to use the seeds with uncured tegument which should germinate more quickly (in August). The seeds of Linden are indeed dormant and also require 2-3 years of time before germinating, because not only the pericarp is impermeable to water and oxygen, but also the seed has some integuments that must be modified by the biochemical agents of the soil to become porous. Techniques to encourage germination by interrupting the seed’s dormancy include cold stratification (at 2 ° C) for 14-18 weeks or warm stratification for five months at 30 ° C, followed by another five months of cold stratification. For the sowing operations it is necessary to wait for the spring period, on a bed of fertile soil and sand. Home transplanting takes place with plants of at least one year, always in spring. Much more simple and practical is the multiplication for suckers: in this case just take them from the base of the tree during the winter taking care to remove a bit ‘of roots and transplant them immediately.

Uses and Traditions –
The Tilia cordata is a long-lived tree that can become secular. It is distinguished from the local lime-tree (Tilia platyphyllos) for the smaller leaves, the asymmetrically heart-shaped shape and the presence on the inferior page on the axils of the ribs, of reddish brown tufts. In Italy there are only two species of lime trees in the spontaneous state, namely this species and Tilia platyphyllos. The two species hybridize each other giving rise to Tilia × vulgaris, an entity often used in urban parks and trees. It is a species used in urban green spaces, especially in parks. Its wood is homogeneous and easily workable, but does not have great mechanical resistance. It is used to build small objects, especially for cooking. Also used as an imitation of ebony. As firewood it is not particularly appreciated. This species is used in silviculture, especially in coppices, and was once treated with a turn of 15-20 years. Shifts of 25-30 years are currently preferred. It has excellent ability to emit from the stump. Suckers tend to fall back to the beginning, but then quickly straighten out. However, the lime can also be governed by tall trees. Wild Linden flowers are rich in essential oils and are used to prepare soothing infusions. It is also very well known as a mellifera plant and is bottled by bees, and the honey obtained is slowly crystallized and is often unifloral. Linden honey has a rather light amber color, with the possibility of also seeing reflections tending to yellow-green in its purest varieties. Like all types of honey, it naturally tends to crystallization, although for the lime it is a rather slow operation. Once crystallized, linden honey becomes ivory-white. On the palate it returns a fresh, sweet, aromatic flavor that recalls mountain herbs and mint, while retaining a certain intensity and persistence. The properties of linden honey are numerous and derive from the extraordinary characteristics of the plant from whose flowers the bees collect the nectar. In addition to the normal anti-inflammatory, anti-bacterial and anti-oxidant action that it shares with other types of honey, the lime tree also has some peculiar characteristics, which make it a very versatile honey and appreciated by many. It performs the function of a true anti-spasmodic, functioning as a calming of the nervous system, and is often used as a soothing to counteract the anxious states and the disorders that derive from it. It is particularly suitable for those who suffer from insomnia and also has anti-pyretic properties and helps to cleanse our bodies. In addition, it is recommended for those suffering from digestive, cardiac and circulatory problems, favoring the prevention of heart attack and thrombosis thanks to the presence of potassium and vitamins such as beta-carotene, vitamin K, B and E.

Preparation Mode –
From the Linden, in the cultivation and forest areas it is possible to obtain even a floral honey, moreover, from its flowers it is possible to produce infusions that are used for relaxing and soothing purposes.