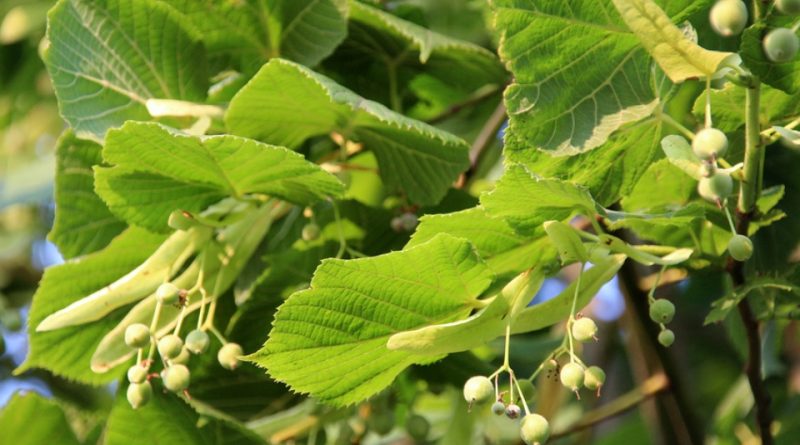 The local lime-tree (Tilia platyphyllos Scop.) Is an arboreal species belonging to the Tiliaceae family.

Systematic –
From a systematic point of view it belongs to the Eukaryota Domain, Kingdom Plantae, Magnoliophyta Division, Magnoliopsida Class, Malvales Order, Tiliaceae Family and then to the Genus Tilia and to the T. platyphyllos Species. It is synonymous with the term Tilia Europea L ..

Etymology –
The term Tilia was already the Latin name of the lime tree in Virgil and Columella and derives from the Greek word “ptilon” which means wing, due to its characteristic leafy bract which facilitates the spreading of infructescences by wind. The specific epithet platyphyllos comes from the Greek πλἄτύς platýs broad, wide and from φύλλον phýllon leaf, lamella, because of the large leaves compared to those of the congeners.

Geographic Distribution and Habitat –
The local lime tree is a plant with European origins, in the Caucasus area. grows in fresh and humid woods from the floor to 1,200 m. of altitude, often in association with hornbeam, English oak, elm tree, black alder, elder ash, maple, mountain elm and beech. In Italy it is not common in the spontaneous state and it is frequently found in parks and gardens. 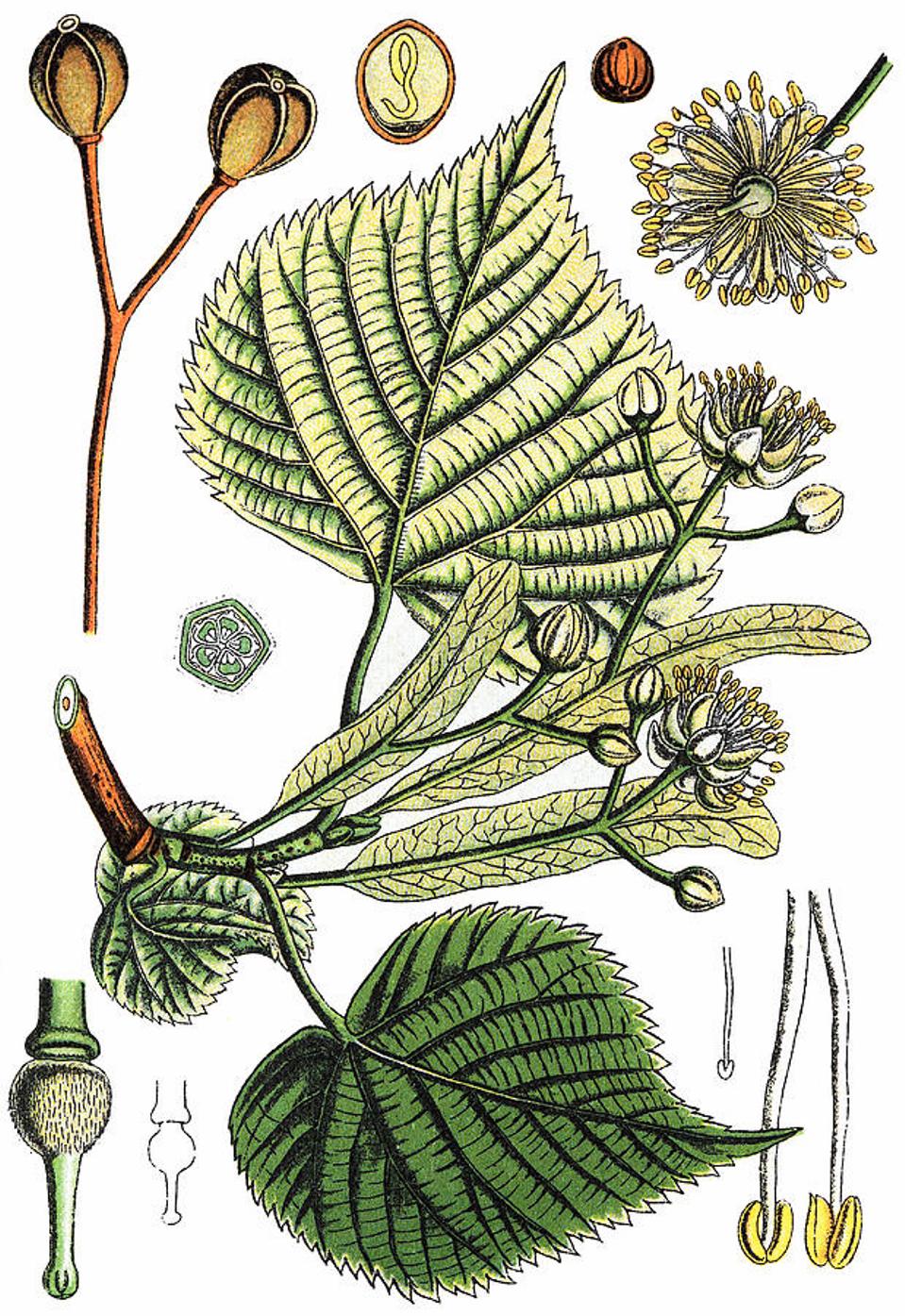 Description –
Tilia platyphyllos is a tree that can reach 40 meters in height, with a rounded, conical shape. The trunk is straight, covered with a grayish rind, first smooth then chapped with age. The leaves are deciduous, 5 to 12 cm long, alternate, petiolate, ovate-cordate and acuminate at the apex, a little heart-shaped at the base. The flowers are yellowish and fragrant. The fruit is a pseudosamara, with a subglobose or pear-shaped pericarp with a thick, tomentose-velvety shell, crossed by five prominent ribs.

Cultivation –
The Tilia platyphyllos is a tree that can be grown up to 1200 meters above sea level on moist, but not too much, and well drained soils. It prefers deep soils with a tendentially acidic pH. This plant has a good resistance to drought, salinity and pollution. In general, however, the lime tree is a tree that grows in full sun that adapt well enough to different situations growing in fact without too much trouble even in urban environments and thus tolerating atmospheric pollution. They are very tolerant plants even at low temperatures. In these conditions, however, the seeds do not reach maturation.I genus does not need fertilization during its growth, at the time of implanting the organic substance is added. The plants during the winter must be pruned to eliminate the numerous suckers that grow at the base of the plant and to contain its development and give it the desired shape. It propagates either by seed or by cuttings from the side suckers.

Uses and Traditions –
Tilia platyphyllos, also known with the name of nostrale linden is a deciduous and long-lived tree that exceeds the century of life. In Italy there are only two species of lime trees in the spontaneous state, namely this species and Tilia cordata. The two species hybridize each other giving rise to Tilia × vulgaris, an entity often used in urban parks and trees. The distinction between the two pure species is not difficult, if the plants are carefully observed, and can be based on these elements:
– the size of the leaves, a maximum of 8 cm in T. cordata and up to 15 cm in T. platyphyllos (nevertheless, in the rejects released as a result of pruning or yielding, the leaves of both species can be much larger);
– the lower page of the leaves: both the species have tufts of hair at the axils of the ribs, but these tufts are brick-colored in T. cordata and whitish in T. platyphyllos;
– the fruit: that of T. cordata is small, maximum 8 mm in diameter, without evident ribs and, crushed between the fingers, it breaks easily; that of T. platyphyllos is larger, with 5 ribs pronounced and much more resistant;
– the gems: in the T. cordata are visible 2 flakes (peru), in T. platyphyllos you see 3; – the young twigs of T. cordata are glabrous, that is smooth, while those of T. platyphyllos are covered by a thin hair, that is, they are pubescent.
This plant is widely used for road trees and parks. Excellent in urban environments, it goes to constitute many avenues citizens. Plant suitable for forestation of hilly areas and foothills. The Germanic and Slavic peoples considered sacred linden and perhaps that is often found in the vicinity of churches and isolated houses in the regions of north-east. It is also very well known as a mellifera plant, it is bottled by the bees obtaining a honey, often monofloral, which has slow crystallization.In addition the wood of this lime tree is used like that of the other similar species, Tilia cordata.Il lime is a plant very sought after in herbal medicine. Its constituents are: flavonoids, coumarins, essential oil, mucilage, tannins, vitamin C, caffeic acid and sugars. The properties of the lime tree are: calming, sedative, anti-rheumatic, diaphoretic. It also performs an excellent antispamodic action at the level of the digestive system, especially if linked to anxiety and nervousness.

Preparation Mode –
The used parts of the plant are the inflorescences and the bracts collected at the beginning of the flowering (June – July) and dried. Harvesting is normally done by hand by detaching the flower with all the bract and must be quite rapid as they have a relatively short flowering period. Once collected, they should be left to dry in a well-ventilated and poorly lit place and then, once dried, they will be kept in a sealed glass container and protected from light. The bark harvested in spring is also used. The lymph and the linden infusion are used for insomnia and nervousness due to its sedative action in the brain. It is also effective for coughs and influences. The decoction added to the bath water has a sedative effect to combat insomnia and nervousness. Tablets soaked in linden tea put on the eyes relieve tiredness, redness, bags under the eyes, burns and rashes. The foot bath with the infusion fights tired and swollen feet. The infusion is also an excellent depurative for the skin, smoothes wrinkles and helps in cases of skin redness. The linden fragrance can also be enjoyed in the kitchen by drying the flowers and once crumbled, using them to flavor sweets or syrups. While in Italy the lime tree is not a widely used plant in the kitchen, on the contrary in other countries, such as Spain, it is used instead of chamomile.