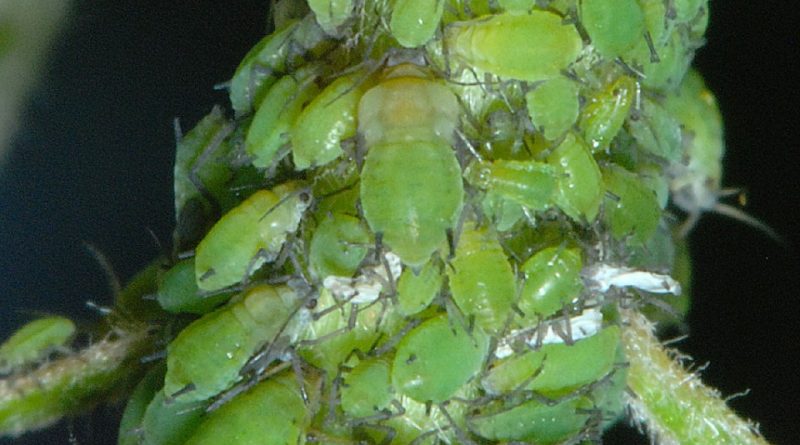 Geographic Distribution and Habitat –
The green apple aphid is a small polyphoid insect that we can find on different species, in many parts of the world. Besides finding it on apple (Malus domestica), Aphis pomi infects other plants in the Rosaceae family including the pear tree (Pyrus communis), the hawthorn (Crataegus monogyna), the medlar (Mespilus germanica), the quince (Cydonia oblonga), the rowan of the birds (Sorbus aucuparia), rose (Rosa spp.) and spiraea (Spiraea spp.). It is a monoecious species that completes its life cycle on a single host species.

Morphology –
The Aphis pomi is a small greenish aphid, small in size (about 2-3 mm in length) that lives in colonies on the shoots and on the lower page of the leaves. The female females have a bright green or yellowish-green body shaped like a pear, with waxy particles, and reach a maximum length of about 2.2 mm. The terminal part of the body is black and the antennas and legs are pale with brown points. Winged females have a black chest and a green abdomen, often with three pairs of blackish spots on the three front segments and dark semicircular spots in front and back.

Attitude and biological cycle –
Green apple-tree Afidae winters at the egg stage (blackish) on young twigs. The wintering eggs hatch in the spring and the aphids colonize the young shoots causing the curling of the edges of the leaves. In spring, April-May, the parthenogenetic founders are born, which begin a series of spring-summer generations that can reach even 15-20, taking place entirely on the apple tree (monoecious species). In June, some winged females are produced, migrating to other branches and trees that at the end of the summer are concentrated in large aggregations. In autumn the sessupare appear, which originate the anfigonici that, always on the Melo, lay the eggs destined to winter. The reproduction is however mainly for parthenogenesis, in which the unmated females provide for the proliferation of the new generations. In the presence of the aphids are added the ants that feed on the honeydew secreted by them. The ants establish an action to protect against the aphid, dissuading and removing predators that could feed on aphids; among these we remember the larvae of the midge Aphidoletes aphidimyza and other parasitoids that lay their eggs in the nymphs of the aphid.

Ecological role –
The Aphis pomi is a somewhat polifagous aphid that however focuses particularly on Melo, Pero and other Rosaceae. The damage is determined by the nutritional bites that cause a partial curling of the leaves and a slight interference in the development of the sprouts that can deform. The abundant production of honeydew, which damages the vegetation either directly (causes asphyxia, slow effect with burns) and indirectly due to the establishment of saprophytic fungi (fumigants) which also induces the photosynthetic efficiency of leaves. In general, the high levels of infestation by the green apple tree can cause stunted shoots, disfigured fruits and premature fall of the leaves, especially on younger trees. Even if the Aphis pomi is much less dangerous than the gray anis, it is necessary to intervene if, after sampling, there is an infestation on 10-15% of the controlled shoots, or in the presence of damage from honeydew. Generally, its presence in apple orchards is caused by bad farming organizations, poorly balanced by agroecological techniques, as correcting these natural aspects upstream and improving the conditions greatly decrease the presence of this aphid. Among the natural enemies we remember:
– Coccinellid Coleoptera (predators): Adalia bipunctata, Coccinella septempunctata and C. decempunctata, Scymnus spp., Harmonia conglobata and others;
– Chrysopid Neuroptera: Chrysopa carnea – Ditteri Cecidomidi: Aphidoletes aphidimyza;
– Ditteri Sirfidi, excellent predators, at the larval stage, of Aphids;
– Parasitoid hymenopterans of the genus Ephedrus and Aphidius;
– Predatory mites of the genus Allothrombium.
Let’s say immediately that, generally if spring treatments have been carried out for the gray aphid (in the period of the pre-flowering and at the end of the flowering) they also control the green apple’s aphid. Specific interventions, with aficidi, on Aphis pomi, can be made necessary on plants in breeding or in summer, in case of strong attacks that could produce a lot of honeydew, damaging the fruit.