The Gargano National Park, identified by the codes WDPA 63641 and EUAP 0005, is a protected natural area established by law n. 394 of 6 December 1991. The Gargano National Park is located in the extreme north-eastern part of Puglia, the so-called “Sperone d’Italia”. It has an extension of 118,144 ha and falls entirely in the Province of Foggia. The four Tremiti islands (marine reserve) are part of the park. Inside the park there is the Foresta Umbra.
The communes that come within the Park are 18 and are:
Island communities: Tremiti Islands, Coastal Municipalities: Mattinata, Peschici, Rodi Garganico, Manfredonia, Vieste;
Inland municipalities with important coastal hamlets (in brackets): Ischitella (Foce Varano), Vico del Gargano (San Menaio), Lesina (Marina di Lesina), San Nicandro Garganico (Torre Mileto), Cagnano Varano (Capojale);
interior and piedmont municipalities: Apricena, Carpino, Monte Sant’Angelo, Rignano Garganico, San Giovanni Rotondo, San Marco in Lamis, Serracapriola. From a geological point of view the territory of the Gargano consists mainly of sedimentary rocks, limestone and dolomites, dating back to the Cretaceous and Jurassic period, mostly stratified and affected by the phenomenon of karst dissolution. The exception is the Punta Pietre Nere, which is a mass of dark volcanic rocks that date back to the Triassic period, and emerge on the beach of Lesina. The karst phenomenon, produced by the action of water and carbon dioxide on the limestone rocks has helped to sculpt the landscape in various ways. Along the edge of the limestone block are large erosive furrows that, with a radial pattern, head towards the sea or the Capitanata. These are rocky gorges (linked to the phenomenon of “dry valleys” or “valleys”), caused by mechanical and karst erosion. The Gargano promontory constitutes, from the ecological point of view, an island, separated from the rest of the peninsula by the of the Tavoliere delle Puglie. Of calcareous nature, it is rich in karst forms, such as caves and sinkholes. Originally the promontory was completely covered by forests, now reduced to about 15 percent of the original area, including the Umbra Forest. 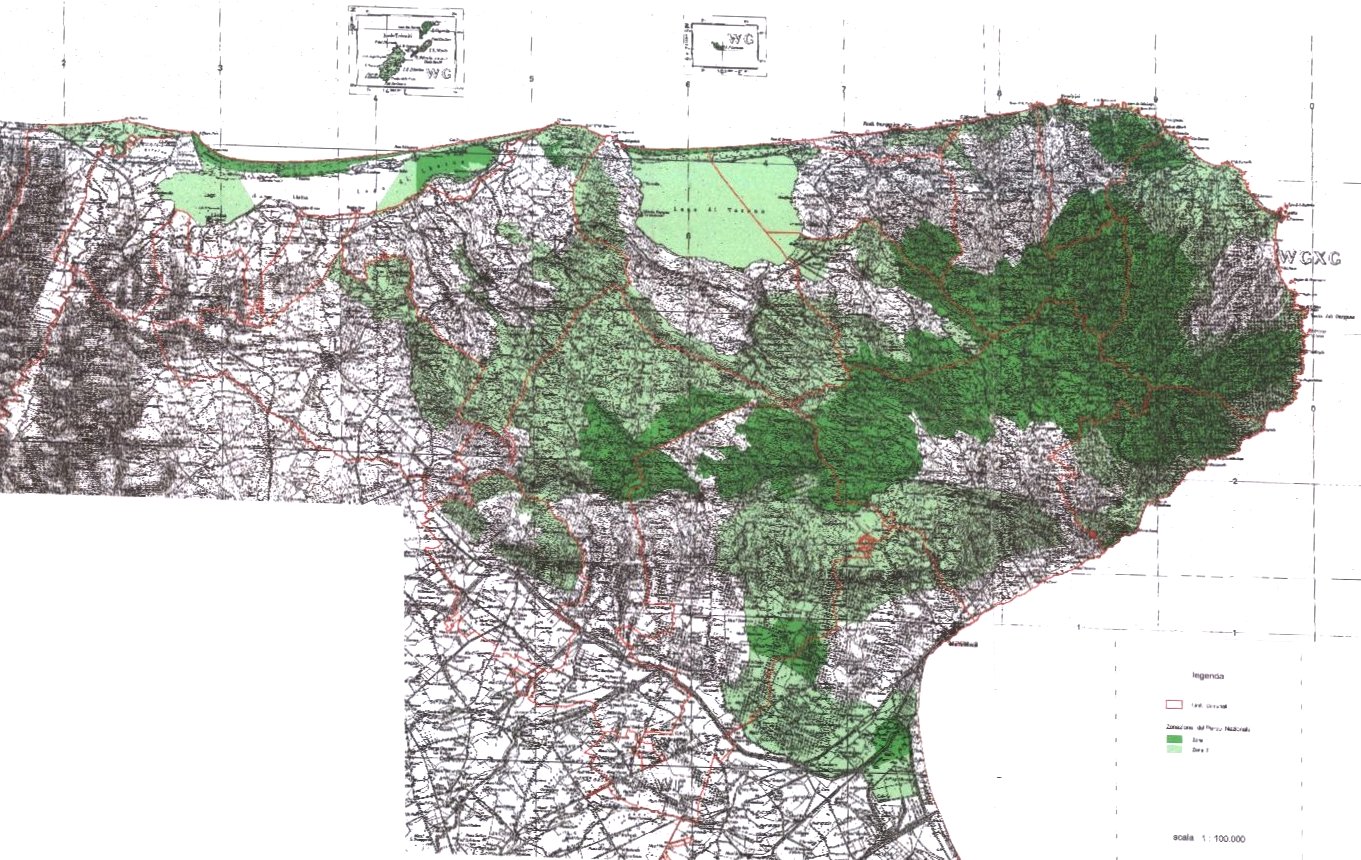 Flora
The Gargano National Park is characterized by a flora conditioned by unique habitats of their kind. In it we find extensive forests of Mediterranean maquis, large karstic plateaus, steep cliffs on the sea, with caves, wooded valleys that descend towards the sea, coastal lagoons, hills and steppe plains (such as the Marshes of Frederick II) .This variegated flora consists of about 2,200 botanical species (35% of the national flora), assisted by a pluviometric trend of about 1300 mm. of water. This particular microclimate allows the presence of some plant essences that are able to live in conditions not found in other parts of Italy and the world: beech woods on the north side, pine forests of Aleppo along the coasts, large extensions of Mediterranean scrub, not counting the oak forests where oaks and holm oaks abound, the mixed forests rich in ornals, ash trees, elms, holly, chestnut, maple, oak, beech, etc. The undergrowth is also populated by numerous essences: ferns, brambles, dog roses, cyclamen, edible and poisonous mushrooms, etc. On the slopes exposed to the sun, the perches, the melastas, the hawthorns surrounded by lentisk bushes, juniper, thyme, brambles grow. , prickly pears and the particular “tree of the devil” (carob tree). Passing towards the foothills the vegetation assumes another conformation and the steppe predominates, with prickly pears, asphodels, ferule, euphorbia, iris; in which a very particular mushroom grows the Pleurotus eringi, in a landscape where we find fragments of olive groves, almond groves, vineyards and wheat fields. Among the most characteristic ecosystems of the Gargano National Park we recall:
– the marshes of Federico II, marshy areas of Frattarolo and the Oasi Lago Salso, divided into two zones: one where reed marsh reed, typhus, eucalyptus, water lily and the other dominates the xerophilous flora or salicornia, rushes, tamarisks, etc;
– the coastal lagoons, characterized by an intralittoral wood that grows on the thin tongue of sand that divides them from the sea (called “island”) and in which vegetate the Cisto di clusio and the numerous reeds that surround the banks.
In the most inland areas of the promontory (forests of Ischitella, Manatecco, Ginestra, Sfilzi, Umbra, Bosco Quarto, Umereta delle Ripe) there are large beech, holm oaks and Turkey oaks, sometimes associated with small sticks, elms and ash trees. Other woods of interesting ecological value are those of Monte Sant’Angelo, Monte Sacro (Mattinata), Spina Pulci (between San Nicandro Garganico and Cagnano Varano.) The coastal area of ​​the promontory is instead characterized by pine forests of Aleppo pine ( about 7,000 hectares) that alternate with the Mediterranean scrub, rich in mastic, phyllireal, multiflora heather and strawberry tree formations.And all the effects the Gargano promontory can be considered an ecologic island in itself, in fact the highest part of the promontory, it has been isolated for a very long prehistoric period, causing phenomena such as:
– endemisms, such as the very rare vedovina of Dalla porta (Scabiosa dallaportae), the bellflower of the Gargano (Campanula garganica), the santoreggia (Satureja fruticosa italica), the citiso (Cytisus decumbens), the enula (Inula candida), the cistus of Clusio (Cistus clusii), a rare species that can be observed on the dunes of Lesina, the cornflower of the Tremiti (Centaurea diomedea) and the icy grass (Mesembryanthemum nodiflorum).
– macrosomatism, abnormal growth of plant species, such as the carob tree of 13 meters in circumference, in the park of Pugnochiuso in Vieste, and the holm oak, 17 meters high, 5 meters in diameter, at the Capuchin monastery in Vico del Gargano.
Another interesting aspect of the isolation of the Gargano promontory is represented by a biodiversity hot spot with the presence of wild orchids, of which more than 80 different species belonging to 17 genera have been registered, some of which are endemic or subendemic of the Gargano as Ophrys promontorii, Ophrys sipontensis, Ophrys argolica subsp. biscutella, Ophrys bertolonii subsp. bertoloniiformis, Ophrys holosericea subsp. apulica, Ophrys holosericea subsp. parvimaculata, Ophrys exaltata subsp. archipelagi, Ophrys scolopax subsp. cornuta, Ophrys iricolor subsp. lojaconoi, Orchis quadripunctata and Serapias orientalis subsp. apulica.

Fauna
The morphological and ecological peculiarity of the Gargano National Park means that there is a vast biodiversity distributed among the most diverse habitats that make up the Mediterranean nature. Within the Gargano, about 170 species of birds are nesting (out of 237 nesting in Italy) and in the most inland forests live 5 species of peaks: green, red, minor, middle and white back. Some birds nest on the “Mountain of the Sun” such as: the buzzard, the minor albanella, the kestrel, the peregrine falcon, the sparrow hawk, the lanner, the marsh harrier and the biancone and, during the migratory period, there are also hawks fishermen and eagles smaller anas. Among the nocturnal birds of prey we remember: the eagle owl, the common owl, the barn owl, the tawny owl and the owl. Other species present in the ecosystem of the Park are represented by: finches, cince, thrushes, blackbirds, cesene and wood pigeons, corvid colonies: gray crows, jays, jackdaws and some pairs of imperial crows. It should be noted that in the wetlands there are about 46 species linked to the aquatic environment, among which the little egret, the red heron and cinerino, the basettino, the bittern, sgarza tufo and the night heron, the mallard, the teal, the garganeer , the snapper tabaccata, the shoveler, the little corriere, the fratino, the stilt of Italy, the moorhen, the coot, the great crested grebe, etc. It is a poultry consistency that combined with species such as wild geese , granaries, lombardelle, swans, flamingos, mignattai, avocette, volpoche, canapiglia and morette, cormorants, various species of seagulls and mignattini, bee-eaters and jays, etc. reaches a quantifiable consistency of 15,000 – 30000 units. If you have the opportunity to visit the reeds we will find species such as: cannereccioni, cane reed pendulum and during the autumn a large colony of starlings. Going to the marshes of the area of ​​Frattarolo, in the autumn and spring, you can see: real-life, gossip, pantan, rain and piro piro of different species, sea partridges, lapwings, plovers, curlews, snipes, whisks, in addition to the hunchback rusty recently reintroduced through a specific funding of the Park Authority. Other habitats where we find particular representations of the avifauna are those of the steppe pastures of the pedegarganica, where among innumerable difficulties, the hen and the big eyes, larks, calandras, chapels and nightjar survive to extinction. Inside the olive groves, in addition to numerous passerines, in spring, numerous turtles and marigolds nest, while in the pastures and in the pedegarganic steppes it is possible to hear the song of the strillozzo. The coastal area is frequented and flown over by swifts, rare reddish swallows, balestrucci, mice, pale swift and alpine swallows. Within the Gargano National Park some EU projects have been financed with the aim of protecting and safeguarding some species including: the last pairs of the lanner (Falco biarmicus), the rarest falcon on the Gargano, as well as promoting the establishment of colonies of grillaio (Falco naumanni), Egyptian vulture (Neophron percnopterus) and eagle owl (Bubo bubo). Passing from the avicultural to the terrestrial fauna it is immediately worth mentioning the Italian roe deer (Capreolus capreolus italicus), subendemic subspecies of the Gargano, in addition to the deer and the most common wild boars, fallow deer, weasels, martens, wild cats (in the thicket of the bush Foresta Umbra), hares, hedgehogs, moles, badgers, foxes, dormice, moscardini, porcupines, squirrels and various species of mice and voles. Important is also the return of the Apennine Wolf seen in recent years, which is present with at least one family unit. Unfortunately, the monk seal was extinct, which was present in some caves of the Tremiti islands until a few decades ago. The sightings in the cave colonies of bats of noctule species (Nyctalus noctula), horseshoe (Rhinolophus ferrumequinum) etc. are interesting. Finally, a mention must be made of the fauna of reptiles and amphibians. The terrestrial and marsh turtle, the slow-worm, the snake of Esculapio and the smooth snake, the luscegnola, the warty gecko, the common viper, the cervone, the collared natrice, the lizard, the rural lizard, etc. are quite frequent. The amphibians are present with the tree frog, the green frog and dalmatina, the common toad and emerald and the Italic and crested newt. These animals live in particular marshy ecosystems, such as canals, lagoon banks and cutini in various wooded areas of the Park.