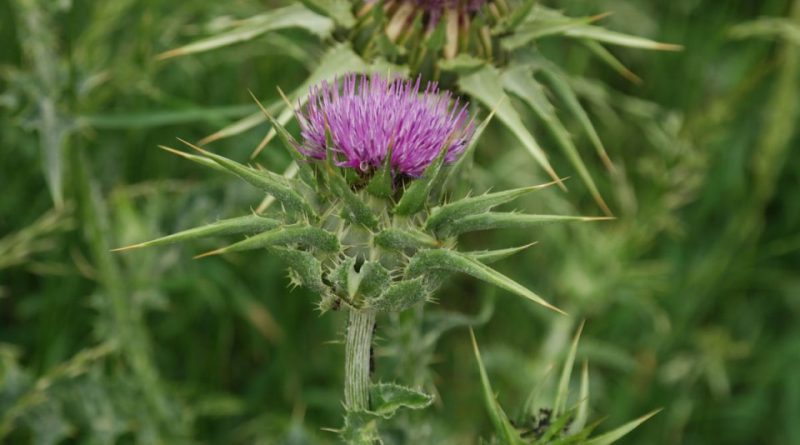 Etymology –
The term Silybum comes from the Greek σίλυβον / σίλλῠβον sílybon / síllybon, name with which Dioscorides called some edible thistles, taken over by Pliny with sillybus, a type of thistle. The specific epithet marianum derives from the Virgin Mary: the legend attributes to the milk of the Virgin Mary, fallen on the leaves while fleeing to Egypt to steal Jesus from the persecution of Herod, their typical white variegation.

Geographic Distribution and Habitat –
Milk thistle is a species widespread in all the Mediterranean regions from sea level to the submontane area. It then becomes more rare in the north and more frequent in the south and in the islands until it becomes intrusive. Its habitat is that of the ruins, along the roads, in the uncultivated and frequents the desert and sub-desert areas that go from the Mediterranean basin to Central Asia. 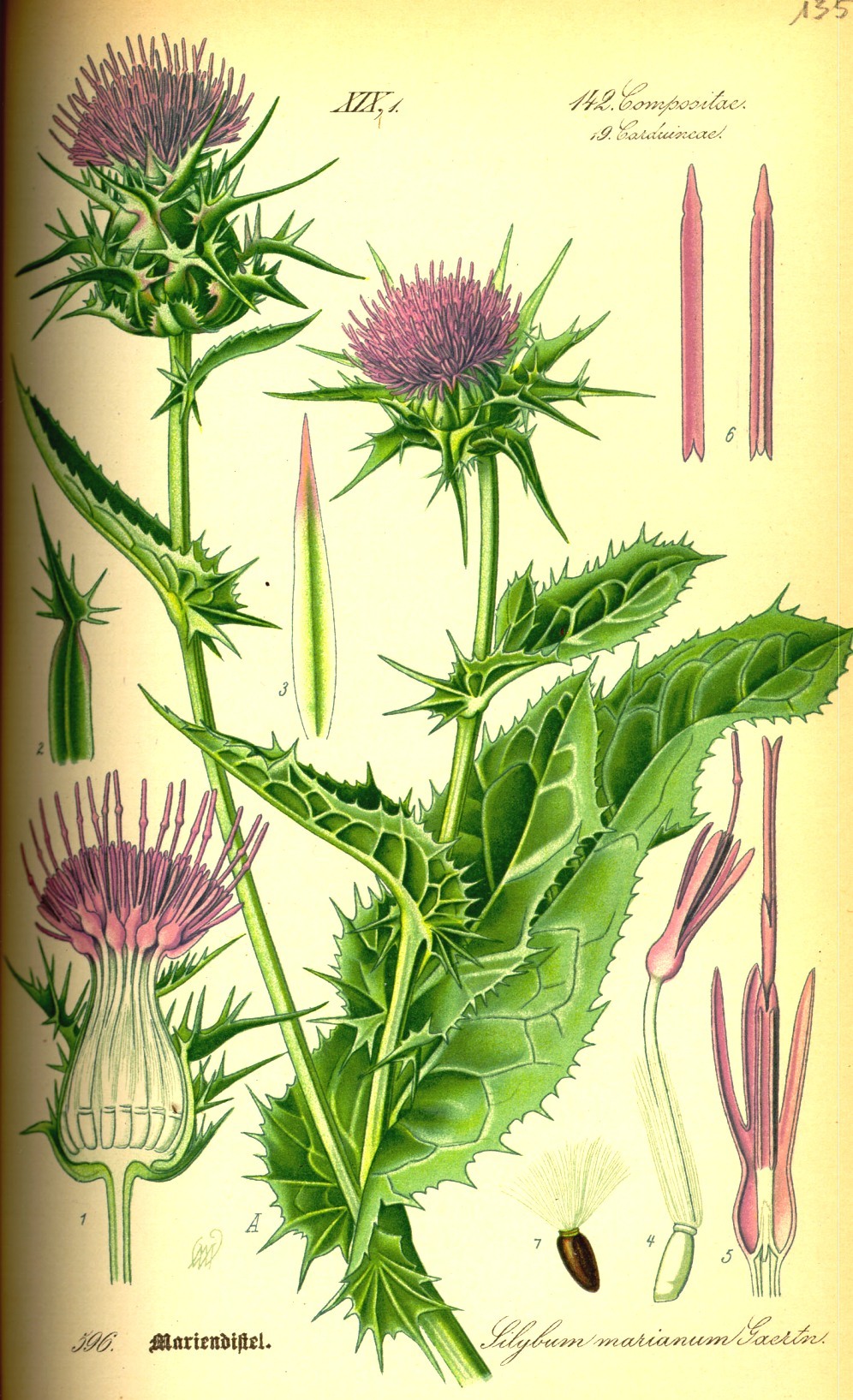 Description –
The Silybum marianum is a herbaceous species with vigorous bearing, which in the first year of life forms a basal rosette of leaves and in the second year the floral scape that can reach over 150 cm. The plant is completely glabrous and spiny. The scape is robust, streaked and branched, with erect branches. The plant is endowed with a root that is robust and potting, capable of naturally tilling compact soils. It has pennatifid leaves, with wavy and sinuato-lobato margin, triangular lobes ending with strong thorns. The lamina is glauchescent green, glabrous, extensively stained with white. The basal leaves are petiolate and can reach 40 cm in length, those of the scape are sessile and amplessicauli, smaller and less divided, expanded at the base in two orecchiette. It has hermaphroditic flowers, with a tubular red-purple corolla; these are united in large globular end heads, covered with strong bracts. These have a slarged base that extends in a flaw, stiff, narrow and sharp, provided with a series of spines on the margins and ending with a sturdy apical spine. The bracts tend to bend downwards during fruiting. The antesis is in the period between April and May of the second year. The fruits are cypsele 6-7 x 3.1-3.5 mm, obovate-tablets, brownish-black or mottled yellow, shiny and glabrous. The peaus of 15-22 mm, pluriseriato is composed of long bristles, scabre, caducous, white, welded in a basal ring.

Cultivation –
For the cultivation of milk thistle we start from the seeds that are collected by shaking the flower heads and are placed directly in the ground. Remember, however, that the plant also has an easy spontaneous diffusion. It is a plant that adapts to any type of terrain, with exposure in full sun and does not need to be irrigated except in the face of prolonged and exceptional drought. The cultivation can be done in irregular spots or rows with a density of 8-10 plants per square meter. In the first year of life, the thistle develops the basal rosette, with large and lobed side leaves, while the leaves that grow on the stem they are smaller and less incised. In the second year, the plants, from the month of May, develop a stem 1-2 meters tall, with the top of the flowers in purple, perfumed, similar to those of artichoke. Remember that thorns are difficult to handle and require the use of protective gloves. For details of the cultivation technique refer to the following sheet.

Uses and Traditions –
Milk thistle is a Mediterranean species that has now become a pest also in other parts of the globe. An ancient Christian tradition, wants the name “Mariano” to be due to the small white streaks on the leaves of the plant, which would have been generated by the milk of the Virgin Mary, lost during lactation at a shelter in a vegetation of thistles, during the period of flight into Egypt with Joseph and baby Jesus. In the following centuries the Milk Thistle was indicated, in particular, to all nursing mothers, for its purifying principles. Already in the sixteenth century Pietro Andrea Mattioli, a well-known humanist and Italian doctor, described the qualities of the milk thistle. The therapeutic use of this plant has been known since ancient times but the isolation and the characterization of the active ingredients have been completed over the years seventy. Above all the seeds of this plant contain a mixture of flavonolignans with depurative properties on the liver; the boiled roots are edible, the flower heads are cooked like artichokes, the young leaves with the vaguely cucumber flavor are eaten in salads and the stems are eaten raw or cooked. Due to its medicinal and therapeutic properties, Silybum marianum is a medicinal plant. It is used for the treatment of liver diseases and used as an ingredient in herbal liqueur preparation. The phytocomplex has been used successfully in treatment in patients with symptomatic chronic hepatitis, with complete disappearance of clinical symptoms, such as asthenia, loss of appetite, severe meteorism, dyspepsia, subgingo, and with normalization of transaminases. The same results can be obtained in patients undergoing heavy cycles of chemotherapy with serious biumoral and clinical changes concerning liver function. Within this phytocomplex, especially silibinin reduces transaminases and other biohumoral indices in the course of the liver disease, which seems to be feasible even in hepato-renal syndrome. However, other flavonolignans present have, however, demonstrated the individual properties that would partially explain the ability of the plant complex to induce a certain regeneration of the liver cells; among these we remember the silandrine that would interfere with the synthesis of triglycerides and is also capable of modulating the function of cyclooxygenase II and the silimonin which is a modulator of the ATP-dependent pump of drug multiresistance (GP170 / MDRG) and of the enzyme 17beta- hydroxysteroid dehydrogenase. From the acheni of the milk thistle is also extracted silymarin, a mixture of flavonolignans (silibine, silidianine, isosilibine and silicristina) known for the purifying and protective properties on the liver.Finally remember that the roots of milk thistle have diuretic and febrifugal properties and the leaves have aperitif properties.

Preparation Mode –
Milk thistle is a plant used in its entirety. In the food field, boiled roots are used which are edible; the flower heads are cooked like artichokes and the young leaves, which have a vaguely cucumber flavor, are eaten in salads while the stems are eaten raw or cooked. In modern phytotherapy this plant is used in decoction or infusion, but with a certain caution in patients suffering from hypertension, due to the presence of tyramine. To prepare the infusion, it is possible to operate as follows: one liter of water is boiled; about 12 grams of Milk thistle seeds are poured and the mixture is kept boiling for 15 minutes; the fire is extinguished, letting it rest for 10 minutes and finally filtering. For a large cup (400 ml), the dose of seeds is roughly equal to one teaspoon (4.7 grams). Finally, as a septum, the Milk thistle is used as an ingredient in the preparation of herbal liqueurs.