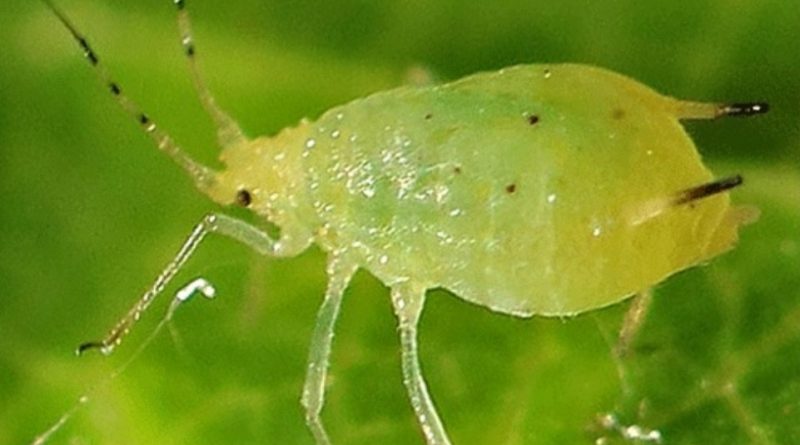 Geographic Distribution and Habitat –
The aphid peach tree is an aphid of East Asia and Japan, but has long been found in North America; it is subsequently found in Europe (Switzerland) in 1947; after which it spread to Southwest Asia, where it created serious problems with peaches. He lives on a primary guest who is the Pesco and on a secondary guest who is Clematis vitalba.

Morphology –
The Myzus varians is a light greenish aphid, whose adult form ather has a length of 2 mm; it differs from M. persicae only for the darker color of the terminal part of the antennas and of the siphons. The winged forms are darker with a large dorsal abdominal black spot.

Attitude and biological cycle –
The Afide sigaraio of the peach tree develops a dioecious cycle on the Peach and on some spontaneous Clematis. The Myzus varians, being a dioic aphid, winters at the stage of egg on the primary host, the Pesco; the eggs are laid at the base or near the buds. At the end of the winter period the founders appear who give rise, on the Pesco, a series of generations of foundations. Later, at the beginning of the summer, there is the migration on the secondary host, the Clematis sp. spontaneous. In autumn the sessupare (or anfigonici) are formed and they return to the Pesco to lay the wintering egg. In some cases there may be an paracycle or an anocycle on Pesco. This Aphid, however, present sporadically, hardly becomes dangerous and harmful and therefore is a less dangerous insect of the congener M. persicae.

Ecological role –
The damage caused by the antide of the peach tree is constituted by the bites of the populations living on the lower page of the leaves; these are rolled up towards the central rib to form a cigar. The most affected leaves necrotize and detach; the fall leads to a halt in the growth of the animal and a reduction in production. However, this is a minor damage compared to other aphids more present and harmful to the peach tree as the Myzus persicae. This is also why Afide produces honeydew with the subsequent production of fumigants and ascent of the ants. Normally the intervention against this aphid is not considered opportune because the insect manifests itself in the same period and with a cycle similar to that of Myzus persicae; for this reason it is not appropriate to make any intervention if you are implementing control procedures of the M. persicae. Only in the case of late infestations, for an anocycle or parcikes on Pesco, a specific treatment can be carried out, using the aficides recommended for green Aphid; but we must always evaluate the period, the presence of useful insects (especially the pronubi) and the presence of its natural enemies that are the same as the Myzus persicae. Some unpolluted varieties of Pesco are more resistant to this type of aphid, but instead colonize with the green peach aphid (Myzus persicae).