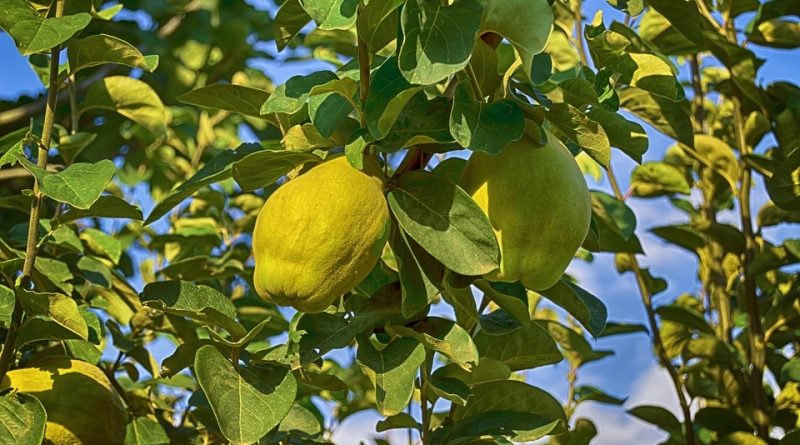 The quince apple or quince tree (Cydonia oblonga Mill., 1768) is a fruit tree species belonging to the Rosaceae family.

Etymology –
The term Cydonia comes from the Greek κυδονία cydonía, quince in Dioscorides, which seems to originate from “Kydo”, the ancient city of the island of Crete, from where the plant was supposed to originate. The specific oblong epithet comes from the Latin oblong, with reference to the typical oblong shape of the fruit.

Geographic Distribution and Habitat –
The Quince Apple is a species native to Asia Minor and the Caucasus area, today it is mainly found in the western Mediterranean area and in China. In Italy the quince is subspontaneous in many regions, where it is present in hedges or as an isolated specimen from sea level up to 1500 m. s.l.m .; it is found natural at the edge of the woods in the woods and on calcareous soils. It is grown for the fruit or widely used as a pear rootstock. 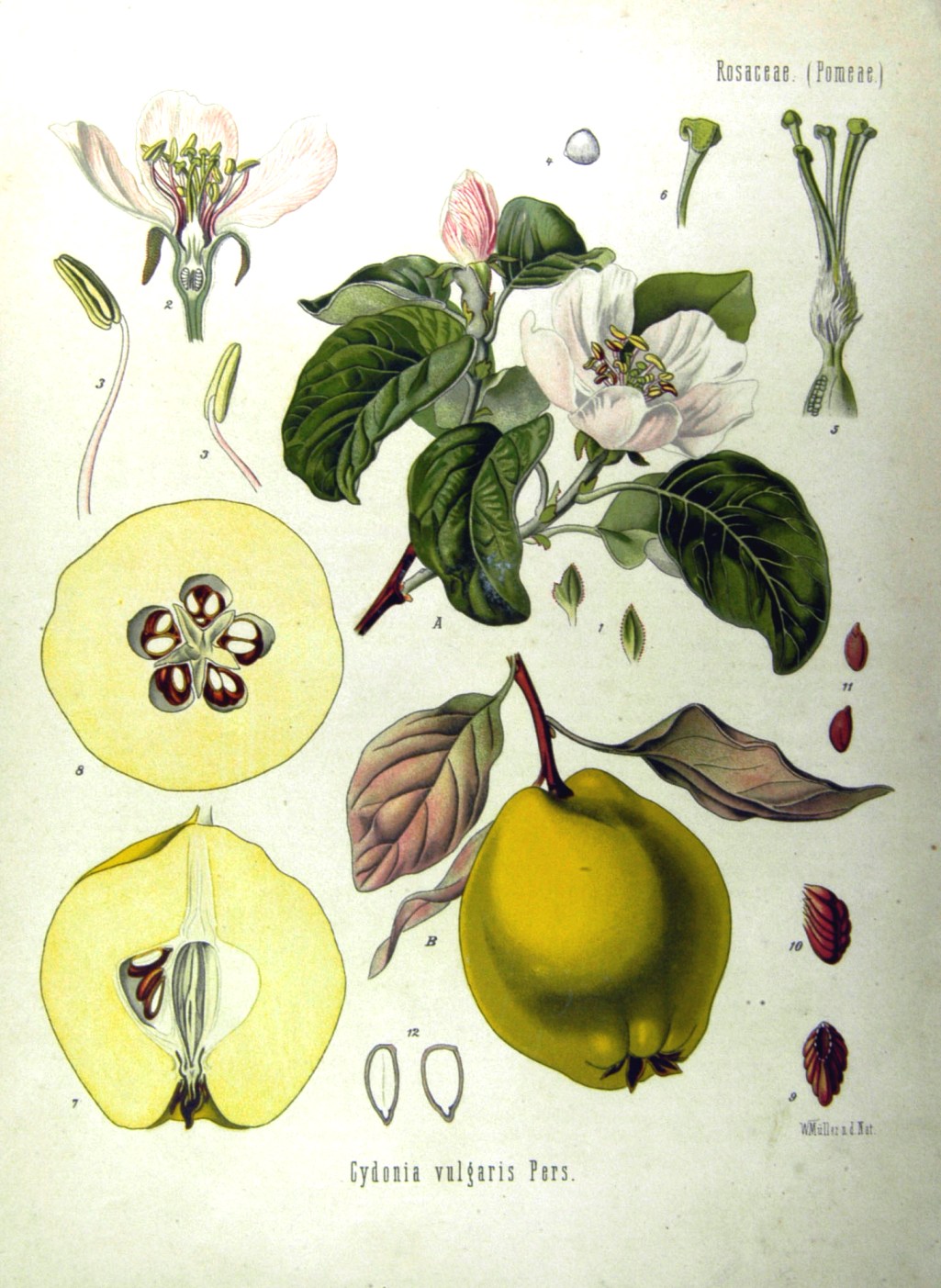 Description –
Cydonia oblonga is a small tree or bush, with height between 1.5 and 8 m; it is a perennial, deciduous species with globose, dense and expanded foliage. The trunk is erect and sinuous; the young branches are tomentose, grayish or yellowish, then glabrous; the bark is gray-brown in color. It has alternate leaves, simple, oval or elliptic, up to 10 cm long, with full margin, upper page of dark green and lower gray with dense tomentum. The flowers are solitary with a diameter of 4 ÷ 5 cm, they are born at the apex of the branches carried by tomentose peduncles; the sepals with tomentose outer face are lanceolate with glandular toothed margin; the corolla is composed of 5 petals of 2 ÷ 3 cm, white or pink sub-orbicular. The anthesis is in the period of March – May. The fruits are very fragrant and are globose or piriform pomes long up to 10 cm or more in cultivated cultivars, often lumpy, immature are green and tomentose, glabrous and intense yellow to maturity, with sour and aromatic pulp. These contain 4 to 6 seeds.

Cultivation –
The Quince Apple is a plant that has a good tolerance to winter cold, is sensitive to drought, because of the root system and does not require soils with special chemical characteristics.Almost all varieties are self-sterile, so to have the fructification you need to implant or have close, at least two different varieties to pollinate each other. In any case, even if some varieties are partially self-fertile and with only one variety the production would be limited, however, benefit from cross-pollination (within a few tens of meters of other varieties). For details of the cultivation technique refer to the following sheet.

Uses and Traditions –
The Quince Apple is one of the oldest known fruit trees: it was cultivated as early as 2000 BC. from the Babylonians; among the Greeks it was considered a sacred fruit to Aphrodite and in Roman times it was well known, being mentioned by Cato, Pliny and Virgilio. It was once widespread also in Italy, from the 60s to today there has been a considerable contraction of the production given that the distribution of the fruits does not affect the large commercial networks. The fruit was very consumed until a century ago, but today it has become a rarity and is considered in the forgotten or lesser fruits. Two types of quince are distinguished according to the shape of the fruit: maliform and piriform, of which the first is more appreciated. Fruits in general are called quinces; the apple-shaped varieties are called quince apples, while the elongated ones are called quince pears. Given the limited size of the plant and the good affinity of grafting, the quince is used as a nourishing rootstock for the pear tree in industrial crops. Not all pear cultivars are compatible with the quince, for example William is not and requires an intermediary, often Butirra Hardy or Passacrassana, which provide the trunk to the plant. The fruit is edible both cooked and raw. Raw is sour and hard, while cooked is very pleasant and sweet. The pulp is easily oxidized and often rich in sclereids, not sweet and astringent. The quinces are used for the preparation of jams, jellies, mustards, spirits and liqueurs. Excellent is also canned. The condition of limited sweetness of the pulp does not mean absence of sugars, but their presence in the form of long chains of carbohydrates, which give the subjective effect of low sweetness; with cooking, in the preparation of jams, and then with the fragmentation of polysaccharides, the pulp takes on an intense sweetness, and the release of a honey scent. The high content of pectin produces a fast thickening of jam or jelly, limiting the cooking time. In the period before the diffusion of refined sugar the semi-solid quince jam was with honey (very expensive) one of the few sweet foods easily available and above all well preserved. Among the uses of quinces we remember: – a quince based liqueur called sburlon which is produced in the Parma area and in particular more precisely in the Bassa near Roccabianca, – the cotognata, semi-solid jelly in small pieces, which is very famous in Sicily and in the Basso Lodigiano, especially in Codogno – for the preparation of chicha morada, Peruvian soft drink prepared by boiling the “morado” corn (a typical variety of the area) in water, with pineapple peel, quince, a pinch of cinnamon and cloves, – in Iran and Afghanistan the quince seeds are boiled and ingested as a remedy to pneumonia – in Malta a teaspoon of quince jam dissolved in boiling water is used against intestinal discomfort – in the subcontinent and pakistan-Indian quince is used by herbalists as a remedy for skin erosions and ulcerations, if immersed in a gel against inflammation of the vocal cords; – in Roccabianca in the province of Parma for the production of a liqueur based on Cotogna called “sburlon “.The main constituents are: mucilage, malic acid, pectin, proteins, lipids and sugars, pentosane and glycoside of hydrocyanic acid, amygdalin, tannins and fatty oil.The mucilage of uncrossed seeds is used as a soothing substance of cough stimuli. and it is also slightly laxative. Also for external use it is used in eye drops, for chapped skin, burns and hemorrhoids, as a base free of fats for cosmetic creams. The fruits can be used in case of inflammation of the throat and to solve intestinal disorders.Finally do not forget the food uses : jams and jams, liqueurs, syrups and digestive drinks.One time, the very fragrant fruits were used in the cupboards and drawers to perfume the linen and the closed environments.The fruits were also placed in the cupboards and drawers to perfume the linen .