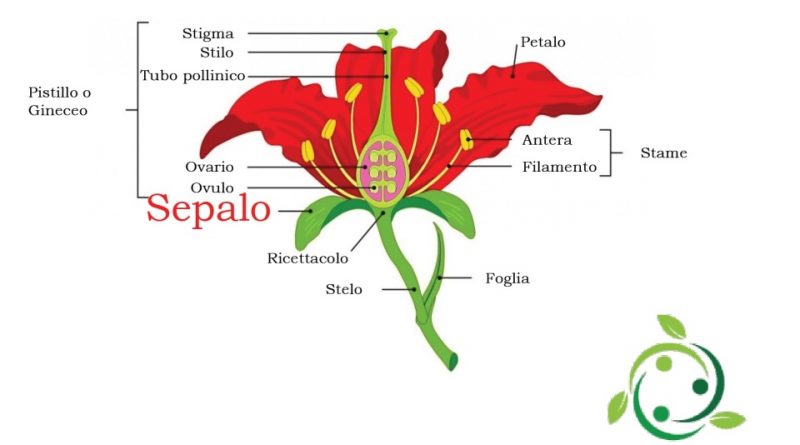 The sepal is a part of the flower that plays a function of protecting the chalice of the flower. The term sèpalo comes from the Latin sepalum, composed of sep (arare) and (pet) alum, petal. The Petal is in fact a modified leaf that forms a part of the chalice. Ultimately the sepal, constitutes the chalice, one of the sterile verticils of the flower and has a protective function. Sepals, generally having a protective function, often result in thickened tissue or have some tuberosity; moreover they can have different consistency and dimension. All together they form, therefore, the chalice, and they are called gamosepali when fused in a single circular, even only at the base, or dialisepal if entirely divided.

The sepals, together with the petals form the perianth, and in many species are modified, reduced or disappeared. In this case it is no longer a question of sepals and of petals but of tepals (modified leaves with the same protective function). At the botanical level the sepals can have considerable differentiations by assuming forms or carrying out different functions. For example. in the Asteraceae (among which the marisa Bellis perennis, the dandelion and others), the sepals have been transformed into very thin bristles to facilitate the anemophilous dispersion, therefore taking the name of pappus; typical of the shower head. Pappus, being a modification of the glass of a flower, acts as a system of dispersion for one’s own fruit, since in composites what we commonly observe as a flower is actually an inflorescence.