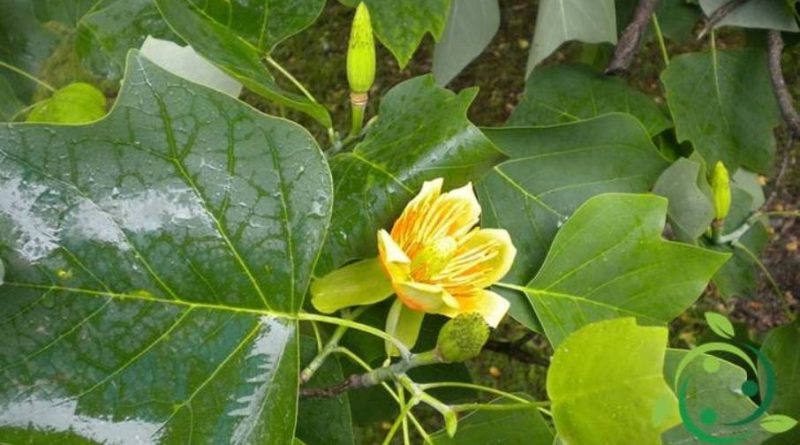 How Liriodendron is grown

The Tulip tree or Tulip tree (Liriodendron, L.) is an arboreal species of the family of the Magnoliaceae which can even exceed 30 m in height. It is a plant native to North America characterized by a robust root canal apparatus and an aerial part with a straight stem whose smooth, gray-green bark tends to take on a rough and cracked appearance in an advanced stage of growth. The foliage is deciduous, dense and generally oval in shape, and is made up of branches covered with large green leaves, lobed with entire margin similar to ancient lire. The flowers are slightly fragrant, large and showy, with corolla formed by yellow-green petals with the central part of orange color, similar to tulips (hence the name of Tree of the tuilpani). The flowering takes place in the period between June and July and From their fertilization, small pear-shaped fruits are formed which, when ripe, hatch and release many winged seeds which, when they fall to the ground, give life to new plants. In this sheet we will see how the Liriodendron and the most suitable agronomic techniques are cultivated. For the choice of the area where to grow the Liriodendron we recommend a bright and sunny area. In addition, it is a plant that tolerates the cold climate quite well but is impatient to the sultry heat. For the type of substrate it is good to be planted in moist, fresh and well drained soils with a slightly acidic pH. As for the contributions water the tulip tree, due to its radical characteristics, is satisfied with the rains but still needs regular and constant irrigation in summer and in periods of prolonged drought, especially for young plants.

For the contribution of the fertilizing elements it is advisable to make mature manure, directly in the plant’s pit, at the time of planting and then thereafter every 3 years, always with well-mature organic fertilizers. Let’s see the multiplication: the Liriodendro is multiplied in spring or autumn by seed but can also be propagated by cuttings and grafting. In seed propagation, before sowing, it is advisable to subject the seeds to a period of vernalization. The seeds of this plant should be kept in the fridge for 15 days, in an envelope containing a layer of sand.After this precaution, the seeds of the tulip tree should be germinated in a soil composed of 1/3 silica sand and 2 / 3 of soil with slightly acid pH. When the new shoots are strong enough they can be transferred to permanent residence with all the bread of earth that surrounds their roots. The drawback of this method is that the tulip tree thus obtained will produce flowers after more than 10 years. In propagation by cuttings it will be necessary to pick up portions of apical twigs from 18 to 20 cm long with sharp and disinfected shears. , after being treated preferably with a rooting hormone, they are rooted in a soil composed of sand and peat in equal parts. The container containing the cuttings should be placed in a bright area but not in direct contact with the sun’s rays; moreover, the substrate must be kept constantly humid throughout the rooting period. Once the rooting has taken place, which will manifest itself with the emission of the first leaflets, the seedlings are allowed to strengthen and only subsequently can they be transplanted to a permanent residence, taking care not to ruin the delicate and fragile roots during extraction from the rooting substrate. In this regard it is good to wet much the same before the extraction of young seedlings.As said the plant of Liriodendron, at the time of planting, should be planted in deep holes, well worked and about twice the width of their bread land. If you have to plant more than one plant, it is advisable to distance them at least 10 meters from each other to prevent their robust root canal apparatus from competing. Once the young plant has been formed the pruning operations, which must always be carried out with sharp and disinfected tools, they consist in removing the dried and damaged branches, in the thinning of the foliage in the innermost parts to allow the passage of the sun’s rays. These interventions are recommended to be carried out in late June. As for adversities, the tulip tree is a rather rustic plant but sensitive to the attack of aphids, so that no nitric fertilizers should be kept apart to not soften the vegetative parts, and fears the leaf chlorosis, reason why the limestone content of the cultivation soil must not be too low.Another illness that can create some problems can be the verticillosis, a fungus that attacks mainly the young seedlings, especially in the nurseries, causing the desiccation of the leaves.